A Week of Wonderful Worknights - and an Ops Session

A month of working just-about-all-out on the layout culminated in the final week leading up to the "shake down" ops session. As it turned out though, the ops session devolved a bit into a work session. But no matter - the days leading up to Friday's session were among the most productive of all, given a little help from some friends.

The final 7 days started with a "Town Hall" meeting at the Valley RR to review the up-coming season. While I've been a steam locomotive fireman there on and off for almost 30(?!) years, I'm really hoping this year to finish my engineer qualification. But the meeting got even better when I saw Roman in the audience, home from school. I wondered whether he'd be willing/able to help on the layout. Turned out he was.

So while he worked on finishing up the east end staging yard and installing feeders there and in Saybrook, I got busy installing the bus line from Essex to Deep River. 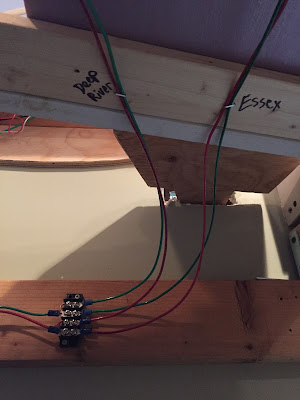 As you can see, I like neat, labeled wiring. But as good as I think I am sometimes, I really envy guys that can be so neat with much more wiring than I have. I only have track power - no switch motors (outside of Saybrook), no signalling, no cab bus. In the photo above, you see that I split the bus to go down each side of the peninsula rather than looping it around. Creates a shorter run of bus (and less chance of voltage/signal drop. What you don't see here, is the third busline run I sent through the wall to Saybrook. I'll cover that more when I describe the wiring on the liftout.

After Roman's help Saturday afternoon, I spent Sunday afternoon, Monday, and Tuesday evenings finishing the wiring on the mainline. Then Wednesday night, Bill and Dick joined Roman and I for another work night. Bill worked on fitting-in the Shailerville Bridge section (more on that in a future post) while Roman and Dick worked on feeders. 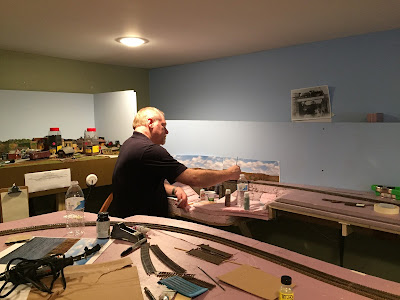 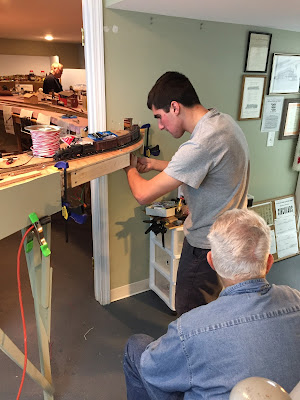 Speaking of wiring, be sure your feeders are attached to the proper side of the bus. When I tested the mainline, I got shorts whenever the train would go over the liftout - but they weren't as apparent since the mogul has a Keep Alive capacitor in it. Roman discovered the problem: I'd mistakenly switched the wires when I connected them to the bus. Fortunately, I connect the feeders to pigtail wires that are connected to the bus. So once the problem was figured out, it was a simple matter to unscrew the wire nuts, flip the feeders, and reattach them. Problem solved.

Having a few straight nights of layout work - including an especially productive evening Wednesday - the layout was just about ready to shake down. Good thing: I ended up working late Thursday night so I had to leave the layout where we'd left it.

Friday night's session ended up being about 65% operating and 35% work. The Wednesday night crew was back to enjoy the fruit of their labor, and Pieter joined in as well. For the first time in over a year, we got to operate the layout. And for the First Time Ever three local freights worked the branches around Middletown. Pieter ran the Valley Local from Wethersfield to Middletown, Roman ran the Air Line Local from the new "New Haven" staging yard track to Middletown, and Bill - having finished installing the Shailerville Bridge (and, incidentally, completing the mainline without any fanfare at all) - ran the first Shore Line Local (PDX-2 a.k.a. "The Haddam Local") from "New London" (staging) to East Haddam.

I only have 3 throttles, but rather than double up on crews, Dick was content to "operate the speeder" - otherwise known as "cleaning the track." He did the unsung - though very necessary - job of running the Bright Boy around the railroad. You wouldn't think that newly-installed track would be so dirty, but once he discovered that it was, off he went with the track cleaning block. Thanks Dick!

Oh - about the throttles - I actually only have two of them now. Strangely, as Bill was heading up the Valley Line, his throttle decided to give up the ghost. No matter what we did, we couldn't get the wireless/radio to work. The batteries were fresh, and it would work if tethered. But we eventually swapped Pieter to a tethered throttle (he was in Middletown anyway - the location of the one and only plug-in on the railroad) and Bill finished his run with Pieter's throttle.

After the session, we opened up the dead throttle to see if we could figure out the problem. No dice. It's an NCE Cab04pr and has been upgraded within the past couple of years, so is all up-to-date. I got this system way back in 2003, but as is all-too-typical, moves and life interfered along the way, so I only have a few months' actual use on it.

So back to NCE the throttle went. Hopefully they can fix it and the cost won't be too painful.

But even a dead throttle didn't kill my mood - the Valley Line is finally operating again! - and despite the glitches we discovered during the shake-down.

So I have a punch list of some things to do before the next shake down session, including installing some more feeders, and re-installing a bunch of switch motors. Oh - and I have to deal with not one, not two, or three, but FOUR reversing sections. Given my strange Saybrook shorting problem, I decided to move the reversing sections to the ends of the dogbone mainline. So instead of one long reversing section in the middle of the main, I'll have two shorter sections at the ends. And I have the Saybrook Wye to deal with. And, finally, I will likely want to change the reversing section between Middletown/"Hartford" and Wethersfield. While that section operates ok, if I'm going to get away from using Frog Juicers as reversing units, I might as well purchase 4 auto reversers rather than 3.

Speaking of which: What kind of auto-reverser would you recommend?

Well, I've rambled enough for now. Seems it's either feast or famine with this here web-log. Now that this Final Big Push is done, I'm looking forward to settling down into a more regular routine of layout progress and posting. I hope you're enjoying following my journey as much as I am sharing it!
Posted by Chris Adams at 12:30 AM