Layout progress often occurs in fits and starts - and it's seldom linear. Sometimes you'll be working on benchwork, sometimes on track, sometimes on scenery, structures or rolling stock. I've been working on my control panel lately - otherwise known as the Old Saybrook Model Board.

A Model Board is basically a control panel in an interlocking tower that will allow a tower operator to operate switches (turnouts) remotely from the tower. I first introduced the need for such a panel in this post and then shared some of the construction mistakes I've made along the way.

Now that's I've started wiring it up though, I figured it was safe to share some build/progress photos and a short description of how I went about it.

The first step is to make up the track diagram. I'd started by using Atlas Right Track software, but you could use Paint or some other graphics program of your choosing. Friend BillS offered to clean up my diagram (actually, he redid it) and sent it back to me in a PDF file in the dimensions I needed: 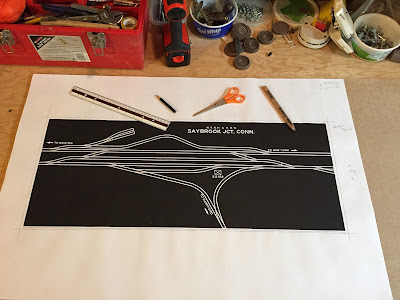 Here's a printout of what he sent. It was large enough (approx 12" x 31") that I needed to take it to Staples (which has the ability to do large printouts) to get it printed. Cost me $4 for each print (would have been cheaper if it had been just a little smaller, but I needed the next-larger size). The photo above shows my starting to mark where to cut it down to the precise size I needed. 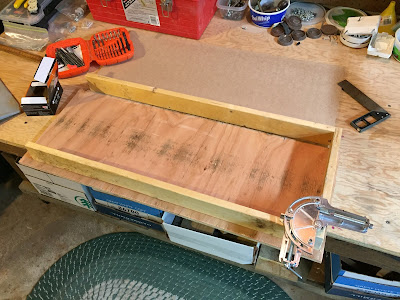 I plan to mount the panel on the wall above my operator's desk, but I knew it'd be much too heavy to just hang like a picture. So the panel itself is mounted on a plywood board back, which is wide enough to reach across the studs on the wall. I'll screw it directly into the studs.

The frame of the panel is made up of 1x3 boards which are secured to the plywood back. No particular reason for 1x3s other than I had them on-hand. But if you're mounting your panel to the wall, you do need for it to be deep enough to accommodate toggles and wiring. 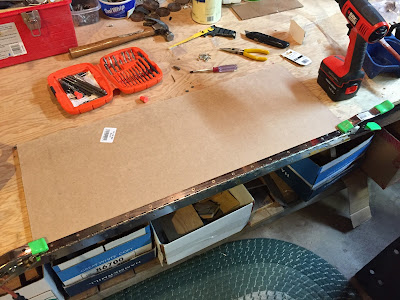 Considering the size of the panel, I used 1/4" thick masonite for rigidity, but beware - as I discovered, this thickness is a bit too thick for toggles and the LED bulbs typically used in such panels. It ended up being ok, with some modifications (namely, routing out the back to accommodate the toggles), but be mindful of the balance between rigidity and ease-of-installing the components you want.

I attached the masonite panel front to the 1x3 frame using a loooong piano hinge. Best. Thing. Ever. I'd considered using some door hinges that I had on-hand, but for the $10 the piano hinge cost me, I have the peace of mind that the panel will never go askew. As you can see above, I clamped the hinge in place to hold it while I drilled the pilot holes for the screws. By the way, after much debate with myself, I decided to mount the hinge on the outside of the box - I think it works better that way, but YMMV. 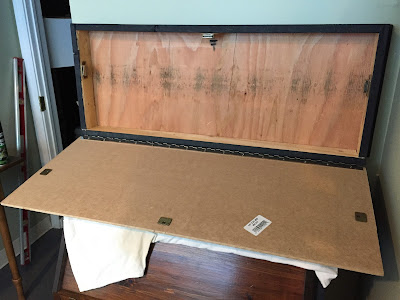 I also used three cabinet magnets to hold the panel in place when closed. Since the whole thing will be mounted vertically on the wall, I couldn't rely on gravity to keep it from flying open. Just note where the toggles & LEDs will go - that you don't end up running into where the magnets are and have to move them. Ask me how I know.

I also prepainted the framing flat black, in keeping with the prototype.
(Sidebar tip: The panel is actually "Floquil Grimy Black" - but don't worry, I didn't used a bazillion 2oz bottles and a tiny brush. I made up a paint sample of the Floquil color and took it to Home Depot for them to make up a quart of flat to match. I wouldn't try airbrushing it, but keep this little tip in mind in case you have particular colors you want to match to paint larger things like fascia, valences, walls, etc.) 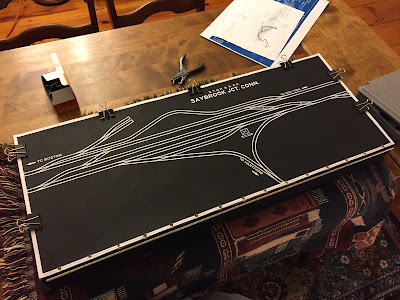 Now it's really coming together! I temporarily clamped the diagram to the masonite, after having punched holes along the bottom to accommodate the piano hinge screws that were poking up through the panel (and would poke through even more if I'd used 1/8" masonite). Those screws will be covered later by some molding. To avoid tearing too much much of the paper, I drilled small (1/8") pilot holes through the paper into the masonite everywhere there would be a panel light or a toggle. 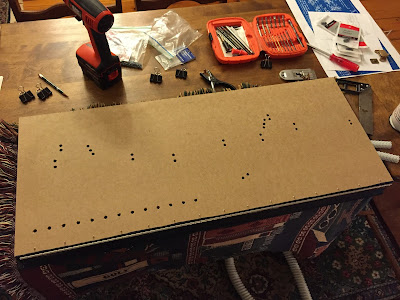 Then I removed the paper and used the pilot holes as a guide for drilling the final 1/4" holes.

Next I ran glue stick over the whole face of the panel and mounted the paper diagram - carefully lining it up with the edges and smoothing it out from the center. Then it was just a matter of using one of the LED bulbs to finish punching holes in the paper to the proper diameter. Bonus: any rough paper edges would go into the hole. 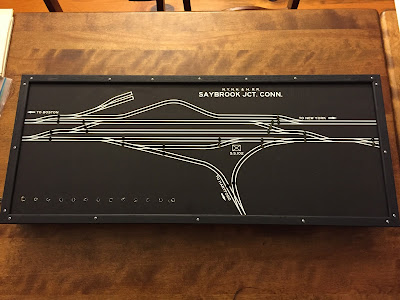 Here's the final product - with molding in place. Those 3/4" corner moldings actually turned out to be the most expensive part of the project. I used my power miter saw to cut the 45 degree angles and used my table saw to rip off the side of the bottom molding. I also marked on the back of the bottom molding where the hinge screws were poking up and drilled dimples into the molding (using the tip of an 1/8" drill bit) to provide clearance for them, thus: 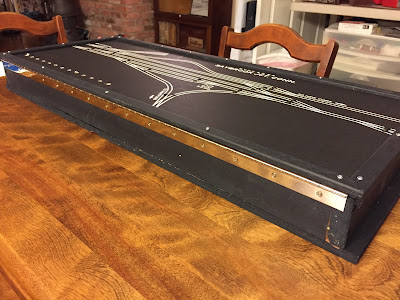 As you can see, that bottom molding sits nice and snug over the pointy bits from the hinge. The ripped off side of the (previously corner) molding allows the panel to open fully. 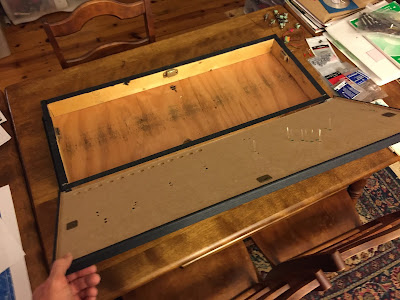 And here it is open and I'm just starting to do the wiring (you can see the LED wires poking up there at the right).

I'm really, really happy with how this all came out, despite a couple challenges along the way. While I've built plenty of benchwork - and am pretty good at it - I'm no carpenter and I've never built anything close to cabinet level stuff. This hardly qualifies as high-end cabinetry, but it's the closest I'll probably ever get.

Bottom line though is that it'll do the job. After I finish installing all the wiring (which I'll cover in a future post), I'll mount it to the wall and start connecting all the switch machine wires. Then, with all those toggles and lights operating, it'll really look - and operate - like a true interlocking tower model board!

I hope you'll take some encouragement from my experience here to try building your own panel - and if you do, be sure to let me know how it goes!