During my Christmas Week Push, I spent a lot of time under the layout. That work is made much more comfortable with an old roll-around desk chair (set as low as it will go), and it's made much more convenient with this little contraption I cobbled together: 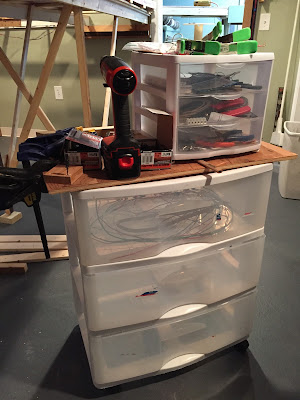 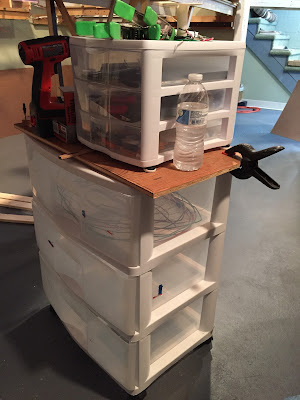 I got a 3 drawer cart, clamped a piece of plywood to the top to form a stiff tabletop (I've got lots of plywood lying around now that I'm using foam for my subroadbed!), and put another, smaller 3 drawer organizer on top of that. The smaller drawers hold small tools, my electrical stuff, and tracklaying stuff. The larger drawers just hold extension cords and larger tools (drill, saber saw, soldering iron) for now, but there's plenty of space for more there.

So that's your Tuesday Tip - a convenient, rollaround work cart for under $30.

Ever since I decided to have the Saybrook Scene operate a bit more prototypically than I first planned, it became painfully obvious that I needed some staging at the "other" (west/New Haven/New York) end of the scene. In fact, when I redid the west loop, I included a severely modified Micro-Engineering turnout to go to said staging.

Well, with the Essex peninsula quickly developing, I needed to make sure I reserved enough aisle space between it and the west end staging yard. And the best way to do that would be to actually build the yard - or at least the benchwork.

The yard will only be 4 tracks (8") wide - 1) because I only need 4 tracks to do at least the minimum of what I need to do, and 2) 8" is about all I can spare in that aisle. Since it'll essentially be a shelf (well, 1x3 open grid with plywood on top), I decided to use shelf brackets attached to the already-existing legs of the Somerset module. 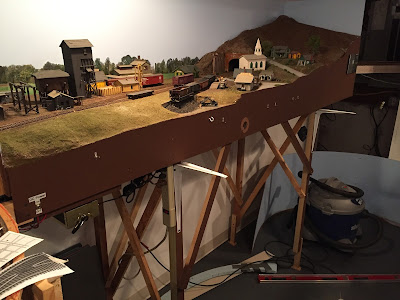 Once I had the brackets up, I could clamp a long 1x3 to them to show me where the front edge of the yard would end up. This was invaluable in knowing how far out the Essex peninsula could expand. I wanted to maintain a 2 foot minimum aisleway. 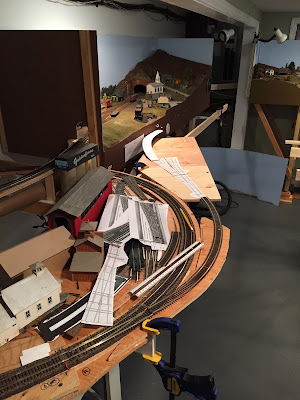 Once I did that, I used a clamp and some plywood to mockup where the staging lead would swing off the west loop, beginning where I'd installed my modified turnout. Unfortunately, it quickly became apparent that the staging yard lead would end up too far out in the aisle. I really, Really, REALLY did not want to move that turnout. My modifications had made it very fragile and it was pinned in place with a number of spikes and track nails. Worse - I already had a switch motor installed under it.

So I did another mockup to see how much aisle space I could save if I moved the turnout (secretly hoping against hope that the answer would be "not enough to justify the work.") I traced the modified turnout on some paper, taped that to some other turnout templates, and moved the assembly around the loop as far as I could go and still be able to get into the yard. 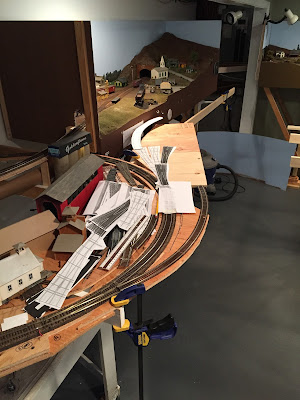 Do you see what I see? Yup, almost 7" of aisle saved. That makes a huge difference when you're down to a 24" choke point.

I couldn't yet bring myself to ripping up the track and moving the turnout - at risk of it falling apart entirely. So in the meantime, I decided to at least build the benchwork for the yard itself... 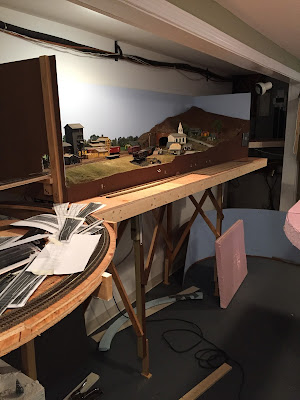 And here's a closeup of where all the turnouts are going to go . . . 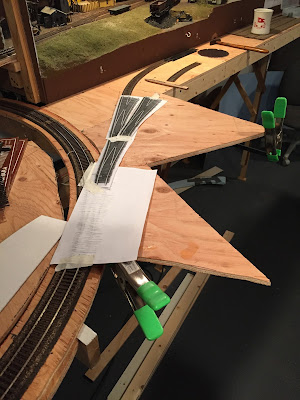