Aaaaannnd.... we're back (to the layout): Curving a Turnout

Such a wonderful, railroady visit with the folks certainly gave me lots of blog fodder - and I definitely wanted to "scrapbook" all the places I went (and I haven't even gotten to my discovery of the Norfolk & Western's Abingdon branch and the O. Winston Link/Raymond Loewy museums), but there's actually been progress on the layout lately and since that's what most of you look for, it's time to get caught up...

Fitting an ME turnout into a curve

When fixing the kink I created on the west end loop, I mentioned wanting to install a turnout on that 24" radius curve in order to branch off to an eventual west-end staging yard. Turns out doing so wasn't as difficult as I'd feared, but you have to be careful.

First, let's see where we started - here's an unmodified MicroEngineering #6 turnout placed on the curve: 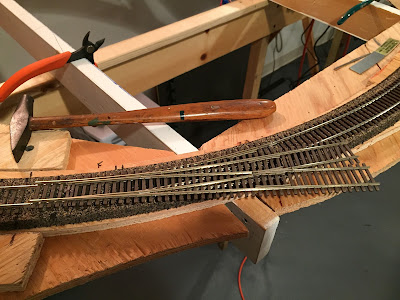 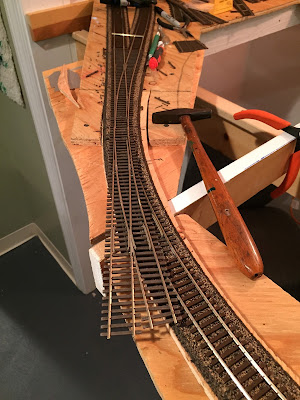 Nowhere close to fitting. But if you shorten it as much as possible and curve it slightly, it'll fit. The key is to cut the webs from between the ties on the side that'll be on the inside of the curve: 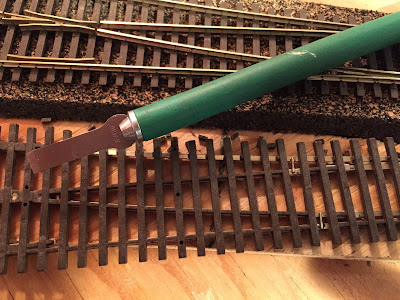 But BEWARE! Do NOT cut the webs from under/around the points. It's not all that necessary and makes the turnout much less stable. Ask me how I know.... 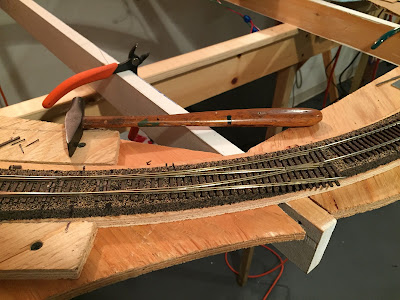 After replacing the ties under the points, I curved the turnout to fit. As you can see in the pic above, it fits nicely. It is under a bit of tension though, so I drilled some holes through the ties and spiked it in place as well. 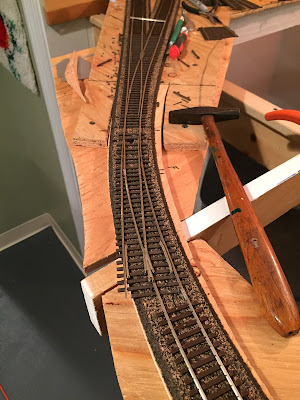 It's obvious in these two photos how much I shortened and curved the turnout and so far it works well. The only concern I'd have going more extreme is that the points might not close all the way on one side. But you probably wouldn't want to curve it any more than I did anyway. This little project shows about as far as I think would be practicable.

And it's a heck of a lot less expensive than an actual curved turnout!

If you try this, be sure to let me know how it works for you.

(Since I won't be doing a post on the Abingdon Branch, but want to be sure and keep all the references I collected, I'll put them here. If you're interested in learning more about this cool line, I hope you'll find the links helpful...)

The Abingdon Branch: Recollections of the Early Day s of a Railroad Era (Jones, 1975)

A Brief History of the Virginia Creeper (T.H. Blevins)

https://books.google.com/books/about/A_Brief_History_of_the_Virginia_Creeper.html?id=1gXQGwAACAAJ
Posted by Chris Adams at 12:30 AM