You may recall that I made the mistake of cutting electrical gaps on a curve. With a temporary fix of reinforcing spikes, the resulting kink ended up ok for the open house - no derailments - but now that I'm getting close to covering over that west end loop with a 2nd level of track and scenery, it's time to do a permanent fix.


As is often the case, ruminating about what to do - or, worse, doing something quick hoping it'll be permanent - usually takes more time than just doing the job right. I'd considered just soldering the rails in place - filling the gaps with solder and smoothing things out. Or at least doing the best I could.

But while things are still at this stage, I quickly concluded that I should just rip this out and start over. There's no ballast, no scenery, and the track isn't even glued down - it's just nailed. So removal wouldn't be that big a deal in the grand scheme of things.

Lesson learned: don't be afraid to redo something if it needs to be redone. And the sooner you do it, the sooner it's (re)done!

The first thing I needed to do to get started was detach the feeders. Fortunately, I've recently changed my process of connecting feeders to bus wires - using 18ga pigtails IDC'd to the bus, and wire-nutted to the 20ga feeders. Thus: 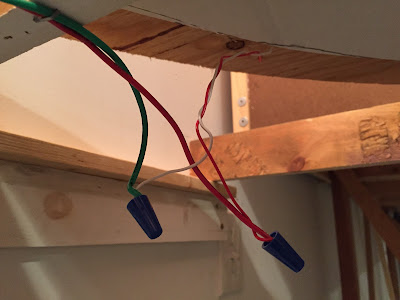 While it would have been easy enough to cut the feeders from the bus, I'd have to reattach them using additional IDCs. This way, I only have to twist off to disconnect and twist back on to reconnect. 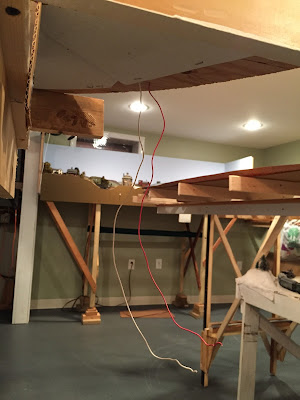 Once the feeders were disconnected, untwisted, and hanging down loosely.... 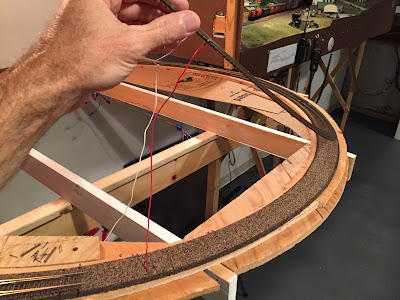 I could easily lift the track (well, once I removed the track nails). 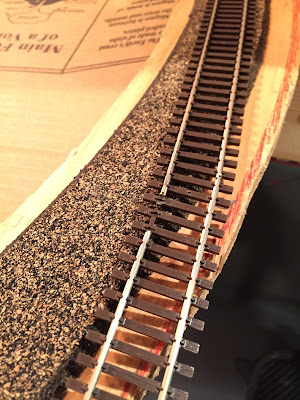 You can see here the result of straightening out the curve - the inside rail is much shorter. No problem, since I wanted to install a new piece of flextrack, I just needed to snip the rails even. It's important to solder flextrack together straight and then curve it. Makes for a smoother curve. Don't try to solder on the curve - you'll probably kink. 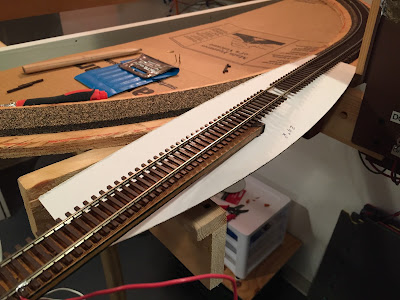 Once the new flextrack was added, I needed to solder it nice and level. As you can see, the track hanging out in midair would droop too much, so I supported it with some cardstock and a yardstick. 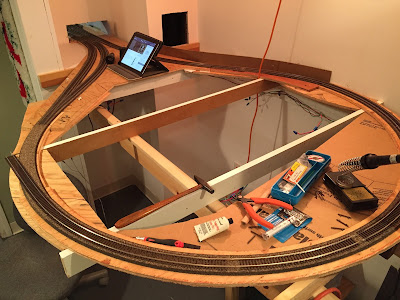 Once you solder the track together, nail it in place and repeat the process until you get around the curve. Or, as in my case, you get near a turnout that's already installed and you need to figure out a good - and kink-free - way of attaching everything.

So the above pic is where things stand until I figure out how best to reattach to the turnout. And good thing I stopped at this point - I'd forgotten I wanted to add a turnout to the curve in order to branch off into another small staging yard. But it turns out a #6 won't just drop in easily on a 24" radius curve, so I'll need to give this some more thought before proceeding.

No worries though - fixing that kink was a must-do anyway and the swing music playing on the iPad helped set the proper mood, making for a very enjoyable & relaxing way to spend the evening. And isn't that what this hobby is supposed to be about?
Posted by Chris Adams at 9:25 AM