Looks like I haven't posted a proper construction update since Nov. 30 (and even that was only a quick couple of paragraphs and a couple of photos). Truth be told - there hasn't been much to report. I had a work session, but it produced more in the way of ideas (specifically, how to operate Old Saybrook and how best to mock-up Essex to East Haddam/Shailerville) than actual progress. I modified the benchwork for Essex to East Haddam to accommodate foamboard construction rather than plywood/riser construction. And then wasted spent a couple of weeks vacillating over that decision - including modifying the benchwork back to traditional construction - and (!) to foam construction.

Then of course Christmas and the associated lead-up took my focus - so nothing much happened.

Not every year, but every year I can, I take off the week between Christmas and New Year's. And I try and spend as much of that time possible working on the layout. It's by far my largest block of time of the whole year, and comes right before work starts getting busy again. So I always put a lot of pressure on myself to Accomplish Something.

This year, I devoted that week to starting the Final Push towards getting the last of the track laid for my layout. With a lot of help from Bill, I made some huge strides forward. The photos tell the story...

With the tunnel "dug" through the wall, I could finally get to Essex. But before getting too far along in this room I thought it'd be a good idea to paint the walls. It's much easier to paint them now than later. . .

Once the walls were painted, I could start mocking up Essex.

But then a funny(?!) thing happened. I had Bill, Randy and Tom over for a work session and they made a very strong case for using 2" foam instead of plywood for my subroadbed. Well, as I mentioned, I went back and forth a bit on that - but not before the four of us had lowered the entire peninsula by 2 inches!

Lowering the layout by 2 inches ended up not being that difficult - with help. And the result was that I could lay 2" foam right on top of the joists. But we'd (I'd) forgotten that the top of the foam had to be the same height as the top of the plywood on the liftout.

So, I spent way too much some time figuring out what to do. I'd actually considered just laying plywood on top of the foam, but thankfully realized how stupid that would be. Then I considered laying a sheet of plywood under the foam. But that would be overkill with 2" foam (which is almost self-supporting). And if I used risers, I might as well go back to traditional riser/plywood construction.

I finally decided to just raise the peninsula back up. But by how much? The easy answer, of course, is "by a plywood thickness, dummy!" But you've probably figured out by now that I'm sometimes a bit dense. In this case though, it worked out.

I didn't like the benchwork (especially the L-girders) being quite so low - that 2" actually makes a difference in moving around under the layout. And then I got an idea . . . 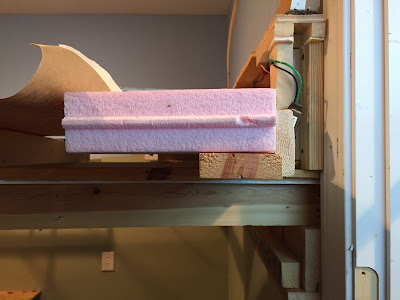 I discovered that if I laid the joists on their side (essentially making them like bed slats), I could raise the benchwork (i.e. L-girders) back up to where it was before. BONUS: the slats would provide a much wider gluing surface for the foam than the joists would. After confirming with Bill that that's how he did it (albeit with 1x2s over a smaller area), I made crazy with the (un)screw(ing) gun and my Sawz-All.

Once I went to all this trouble, I'd all but decided I'd be using foam for this section of the layout, but I still wasn't quite sure how to go about it. Sure, I'd seen in the magazines how some have done it - Bill Darnaby comes to mind, and I grabbed every one of his articles that I could find. But all those other examples used foam in shelf or modular construction. Not for a large, free-standing layout. I'm pretty well-versed in the traditional L-girder/riser/plywood subroadbed method of construction. But foam was WAY outside my comfort zone.

So I took a break to post my many questions on some model railroad forums (fora?) and did something I knew I couldn't screw up and needed to be done anyway: