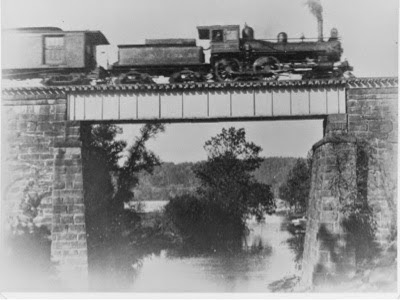 Shailerville Bridge - as the most dramatic engineering feature on the Valley Line - will be a signature scene on the layout. 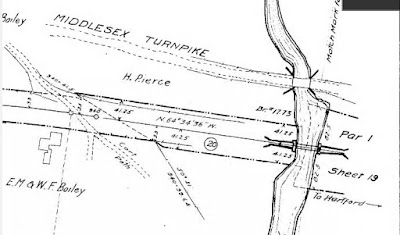 It's located along the Middlesex Turnpike in the Town of Haddam, right next to the Connecticut River. While it is one of the highest - if not the highest - bridges on the Valley Line, what makes it even more distinctive are the long stone abutments. Looking at the photo, it appears that they've been added to over the years. And my best guess is that they originally supported a covered wooden bridge. But by my era - in fact, by the late 19th century if the photo is any indication - the bridge itself is a non-descript steel deck girder type. But the cool abutments remain.

On my layout, Shailerville bridge is the next scene "north" (left) from East Haddam and the last scene before the track goes through the wall and under (and up to) Middletown. Flipping the map shows how you'll see the scene (remember, Essex to East Haddam, north is to the left). 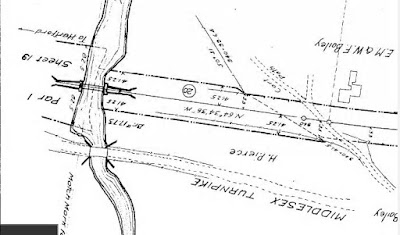 Couple of pretty cool features here, besides the abutments and the bridge itself. Middlesex Turnpike (today's Rt. 154) crosses the same brook (Mill Creek) that empties into the river - but does so at a much lower level (the prototype photo was likely taken from the road bridge). Also - though not shown on the map - is CT's last shad shack.

It's a lot to try and get in a small area, and it's especially difficult to try and imagine it in the ether, so Bill suggested we do a mockup. 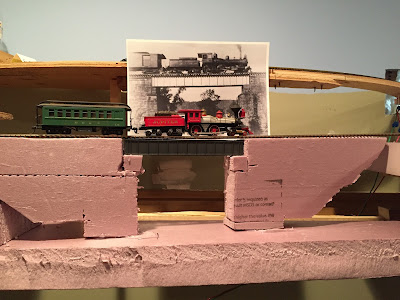 Even with just a rough mockup, you can really see how this scene is coming together. I'll put in some plywood to support the foam base and make the whole assembly more sturdy. My biggest challenge though will be changing the grade from Middletown to drop the track an additional inch to meet the level of the foam. Fortunately, all that track is on risers, so it should be a simple matter of clamping them, unscrewing them, refiguring the grade, dropping them, and rescrewing them. Sounds complicated, but it's actually pretty easy - especially with my handy-dandy grade-figuring tools.

What'll be more complicated is trying to move the existing track - and remove the plywood subroadbed and cork laminate from underneath it - all in a tight corner underneath the Air Line.
Posted by Chris Adams at 6:41 PM