I'd only bought enough foamboard to do Essex and Deep River since I'd assumed I'd do East Haddam using plywood constructions because 1) I have plywood on-hand, and 2) the track coming from Middletown south (and through the wall) was mounted on plywood. I knew I was going to have to transition from foam to plywood again at some point - why not at the north end of Deep River? 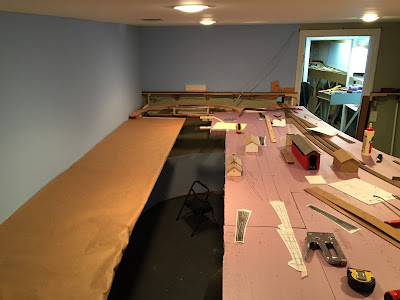 So that's how I started out - kraft paper on the joists in East Haddam (on the left). Deep River is mocked up on the right. You're looking "north" at Deep River and "south" at East Haddam. 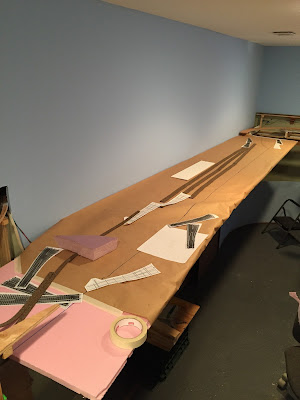 Even Bill agreed with my reasoning re the benchwork, so we got busy plotting out how the East Haddam track arrangement would work. I have about 12 feet to work with here and thought I'd have PLENTY of room for the turnback curve (from DR to EH), the 3 track double ended yard/sidings, a hill for Camp Bethel as the left side view block, and the Shailerville bridge scene before the track had to duck back through the wall to Middletown.

Well, the mockup doesn't lie. I guess I was thinking in N scale again(!) 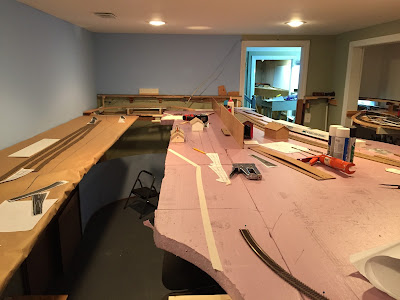 As we were figuring out the East Haddam track & scenery arrangement, we decided we could sacrifice some Deep River real estate in order to maintain our aisle - and give East Haddam some additional breathing room. The masking tape shows where the foam will be cut. 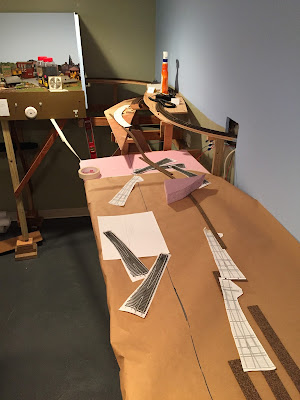 As we got to the Shailerville bridge area, things were really getting pinched. You can see in the background there about where the bridge should go (in front of the upper level curved track - which will be hidden behind a backdrop). 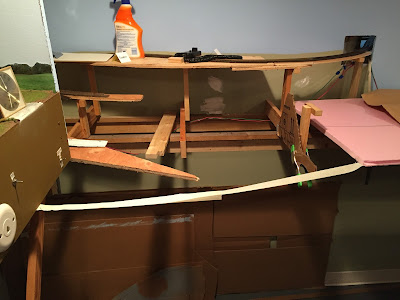 I would need to bump out this bridge scene a bit in order to create enough depth to do the scene justice. Not only is there a high railroad bridge there (click here for a prototype photo), but Rt. 154 (old Middlesex Turnpike) crosses the same creek at a lower level. 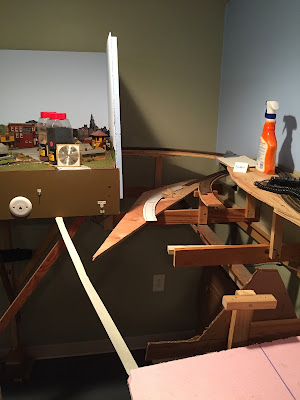 So, this scene sits while I try and figure out how to fit everything in - and by "everything" I mean mostly the bridge, since it'll be a signature scene. My next task: build a mockup of the bridge and its distinctive abutments to see whether how it'll actually fit. 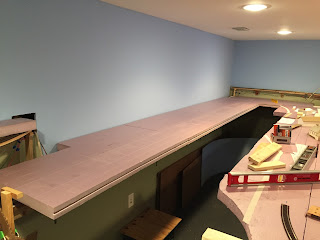 I decided I'm not going to use plywood construction for East Haddam after all. Yup - it's another flat area and I'm impressed by how quickly Essex & Deep River are progressing. So I went out and bought another two 2x8' 2" foam boards which you see here.

So that concludes my report on "What I Did on my Christmas Vacation." I got Essex to East Haddam (a.k.a. the Southern End) started and well along, got the West End staging started, made a bunch of modifications along the way, and even got a bunch of smaller projects (like the drop gate fences) done. I ended the week with my birthday (yay!) and used my birthday money to order the last(?!) of the track and roadbed I'll need to finish the railroad (Double Yeah!!)

Of course, I still have a LOT to do before the Southern End is operable. I'd hoped - way back a couple months ago - to have an operating session including Essex to East Haddam sometime in January. But I don't think that's gonna happen.

Nevertheless, I'm happy with the progress I'm making. I just hope I don't have to wait until my next Christmas Vacation to get so much done!
Posted by Chris Adams at 3:00 AM