(Re)Working My Plan & Making the Grade

In my last post, I mentioned that I'd have to change the existing grade from Middletown to Shailerville bridge. But before I could do that, I'd have to move some existing track. 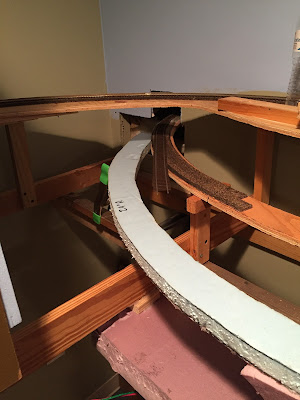 Here's what I was confronted with. The track/cork/plywood/riser is where I ended up a few years ago when I first punched through the wall to get to E.Haddam from M'town, and had planned on the bridge scene being much further to the right. Well, as Bill and I discovered, there wasn't enough linear feet to include everything I wanted, so I had to move Shailerville bridge all the way to the left.

And forward (to clear the Air Line above).

Also, as the track leaves south from Middletown, it goes down a 2% grade to allow it to get underneath Middletown and through the wall to Shailerville bridge. The rest of the southern end of the railroad (E. Haddam-Saybrook) is a few inches lower than the north end (Middletown-Wethersfield), so while the bottom of the grade had been just as the track goes under town, I'd have to continue the downgrade to get to the level of the southern end.

First things first though - gotta take care of the track.

Of course the track is glued down. Fun Fact: Aileen's Tacky Glue dissolves in water. Well, it doesn't actually dissolve (I wish it did), but it will go back to it's previous state when wet. So I sprayed the track with water, waited, and then veeeerrrryyy carefully pried the track up. Who knew Micro-Engineering spike detail was so blasted delicate??!! 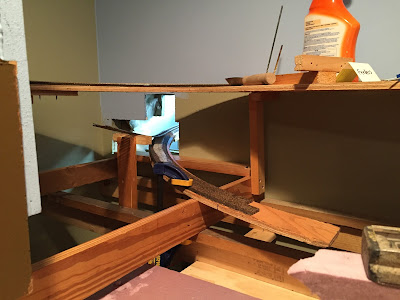 The pictures above show how I kept the track separate from the cork and subroadbed. "Why so far apart?" you might ask. Well, I'll tell you - I had to do this extreme separation in order to give me enough room for, um, to allow me to use, eh, a saber saw - upside down and in awkward, tight quarters - to cut away the plywood & cork.

I'd recommend you plan better than I did so you never find such extreme measures necessary.

Suffice it to say, I don't have a photo of me doing this (though a video would have been priceless). But I relied on my power saw expertise and superior skill & handling to accomplish my goal lucked out.
I guess I could have left the subroadbed where it was and just moved the track over onto the foam base that will eventually be in this corner. But the transition would have been really tricky - and all this will eventually be hidden, so I didn't want any tricky transitions. What I'll end up doing is gluing the end of the remaining subroadbed directly on top of the foam base and use a shingle to transition down the rest of the grade from there.


Roughly speaking, a 2% grade goes down 1/2" every two feet. As I mentioned, I have a 2% grade already, but it's all on straight track. The track from the bottom of that grade to Shailerville bridge is all twisty-turny. So I was hoping to get by with a 1.5 or even 1% grade at most, but I'd have to know how many linear feet I had to work with first.

Measuring straight track is straight forward (ahem), but what about measuring the length of curved track? 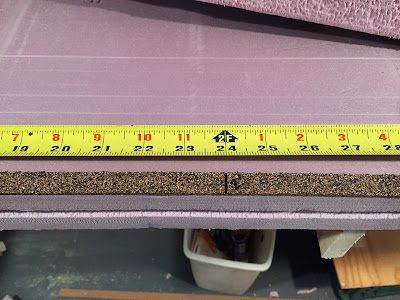 I use one side of a piece of N-scale roadbed, with measurements marked off. It fits right in between the rails of HO scale track (standard gauge) and will bend to whatever curve you need.

Great news! According to the chart above, a 1% grade will drop 1/4" every two feet - so my 8 feet will give me exactly the drop I need! 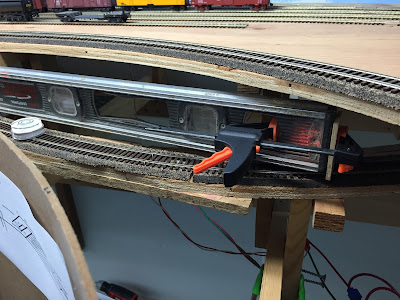 The photo above shows my method for making the grades on my railroad. This is a 2' level. Clamped to the end is a piece of paint stirring stick with a 1/4" mark. The stick is adjusted to that the mark lines up with the bottom of the level. In order to ensure that the track is dropping at a constant 1%, just put this now-modified level on the track. Move your riser up & down and when the bubble is centered, you know your track dropped 1/4" and is at a 1% grade. Then move another 2 feet down the track and repeat the process.

BTW, the other "bullseye" level that you see there on the left helps me make sure my track is level side-to-side or, if tilted on a curve, is tilted to the outside of the curve (superelevation). 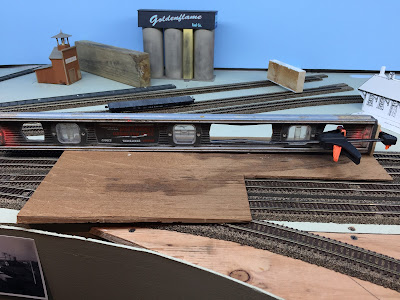 Fun Fact: Cedar shingles drop at a 1% grade (at least this one does). This is what I'll used to transition off of the plywood subroadbed and onto the foam.

I hope you do a better job of planning than I did so you don't end up having to cut things out later. But I'm glad that area was never any further along so that I could still get to it (though not easily). And I hope you picked up a couple of tips for calculating and creating grades on your railroad.

As for me, after my harrowing experience with the saw, I think I'm going to go back to the yard...
Posted by Chris Adams at 12:30 AM