Ah, winter - otherwise known by some as Modeling Season. You're (hopefully) all nice and cozy indoors with no outdoor distractions or chores to keep you from making some progress on your railroad. Even better are Snow Days - if you're lucky enough to get enough snow to have your office shut down for the day (and a helpful neighbor with a quad and a plow, so you can model rather than shovel).

We had a snow day recently and I took advantage of the inexplicable motivation I've had for building lately to tackle modeling the Valley Coal Co. in Wethersfield.

To refresh your memory about Wethersfield, click here and scroll down to see the description of Valley Coal. Here's the Sanborn map, oriented as you'll see it on the layout (standing in the aisle looking west, north goes to your right: 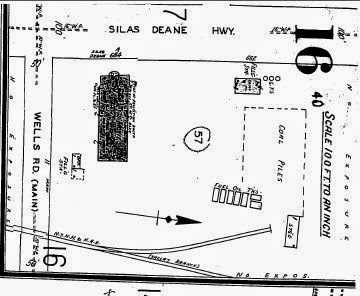 Just one relatively short siding north of Wells Road. The office is over there on the left on Wells Road. What the map doesn't show is the tower/conveyor.

There's only one known photo of the Valley Coal conveyor that's at all useful, but it at least provides a hint of what was there. 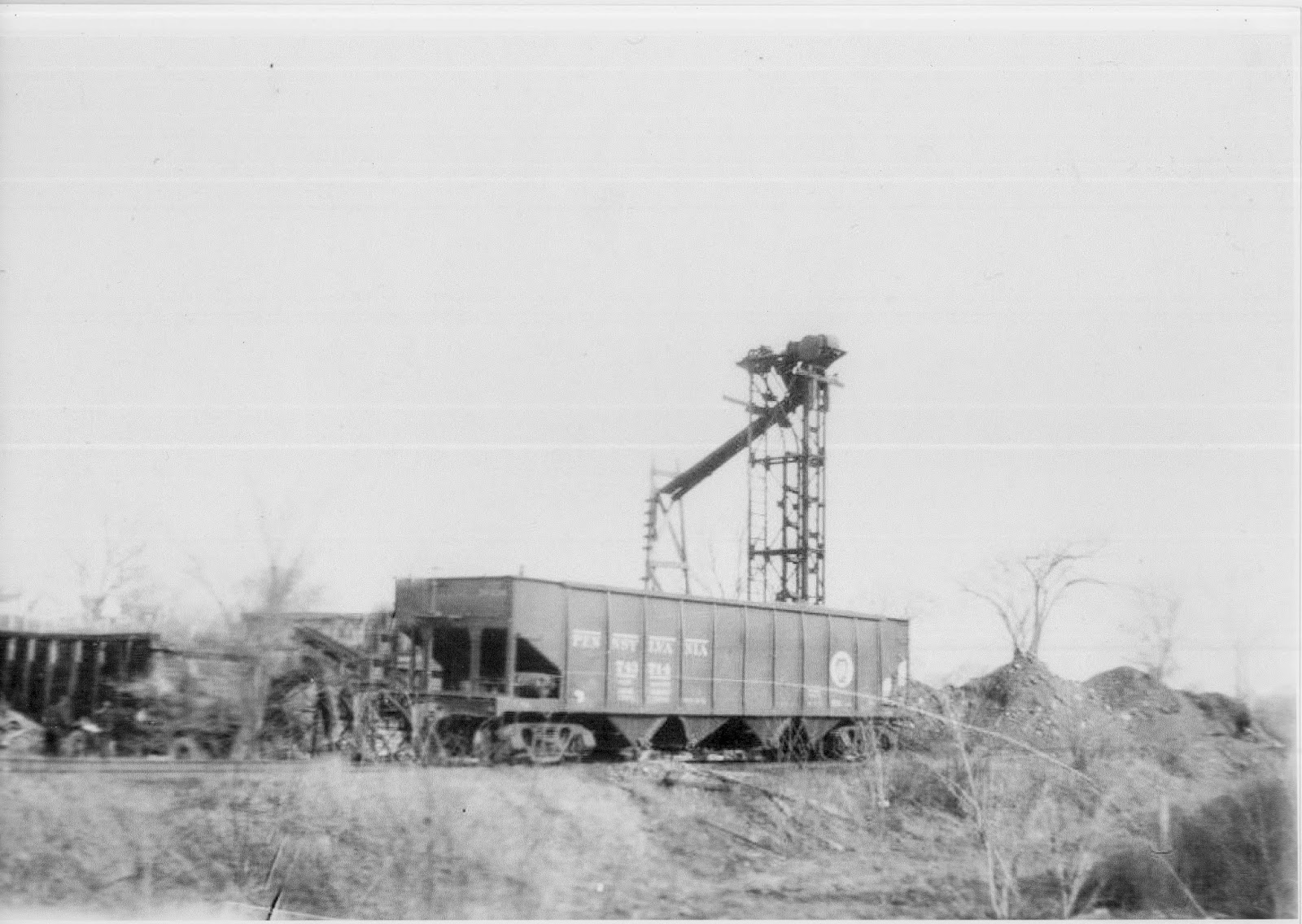 Looks like the hopper dumps into an under-and-between-the-rails hopper that contains a dump car that's then pulled up to the top of the tower by a winch/cable and in turn dumps the coal into the chute to dump into the coal yard. There's no way I would be up for scratchbuilding this structure, even if I was inclined to. Thankfully, Walthers again provided an alternative: 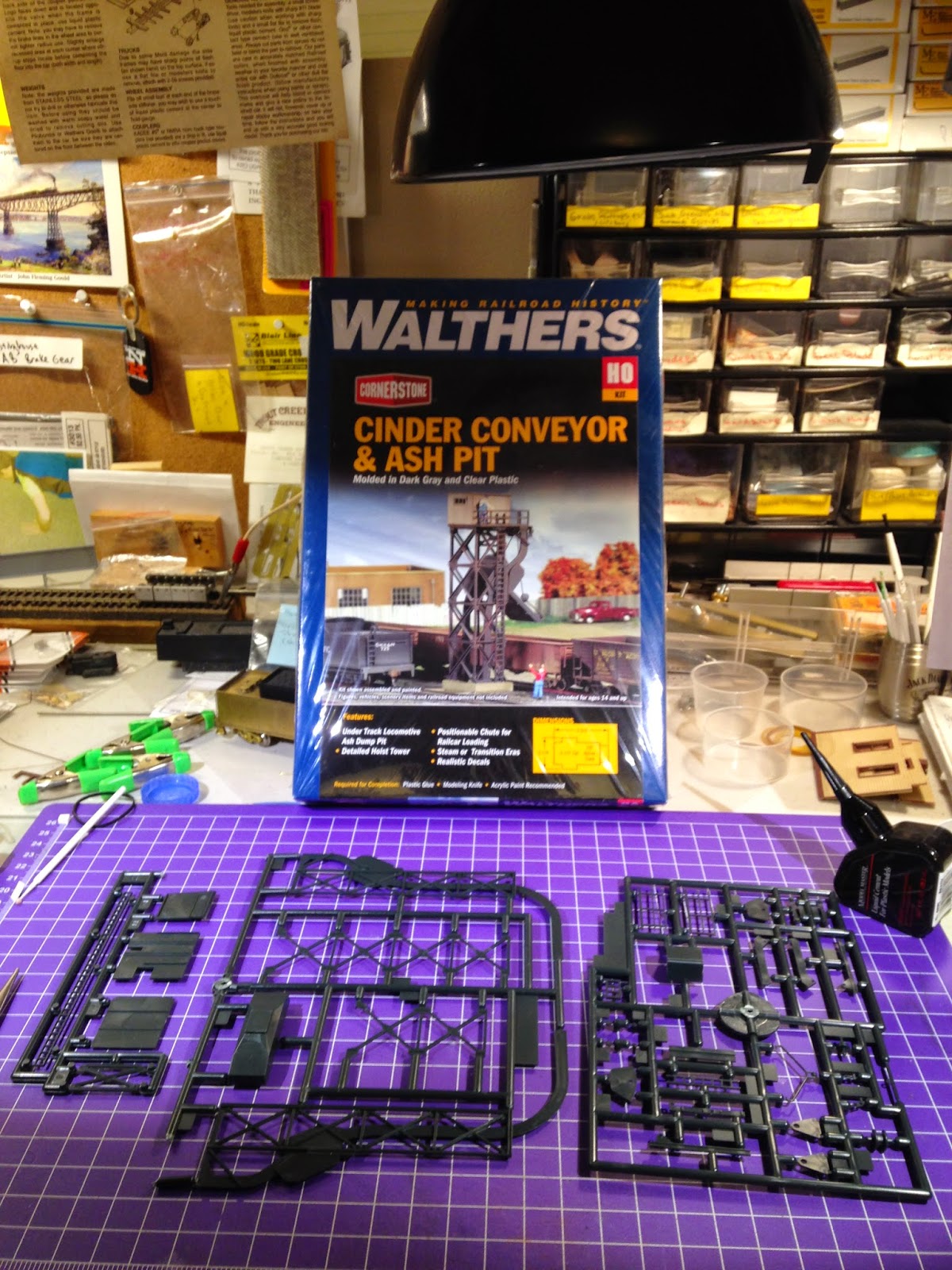 Yes, it's not a coal conveyor but an ashpit and cinder conveyor. But hopefully you can see - as I did - that it'll be a nice representation - especially if I don't have that shed on top. 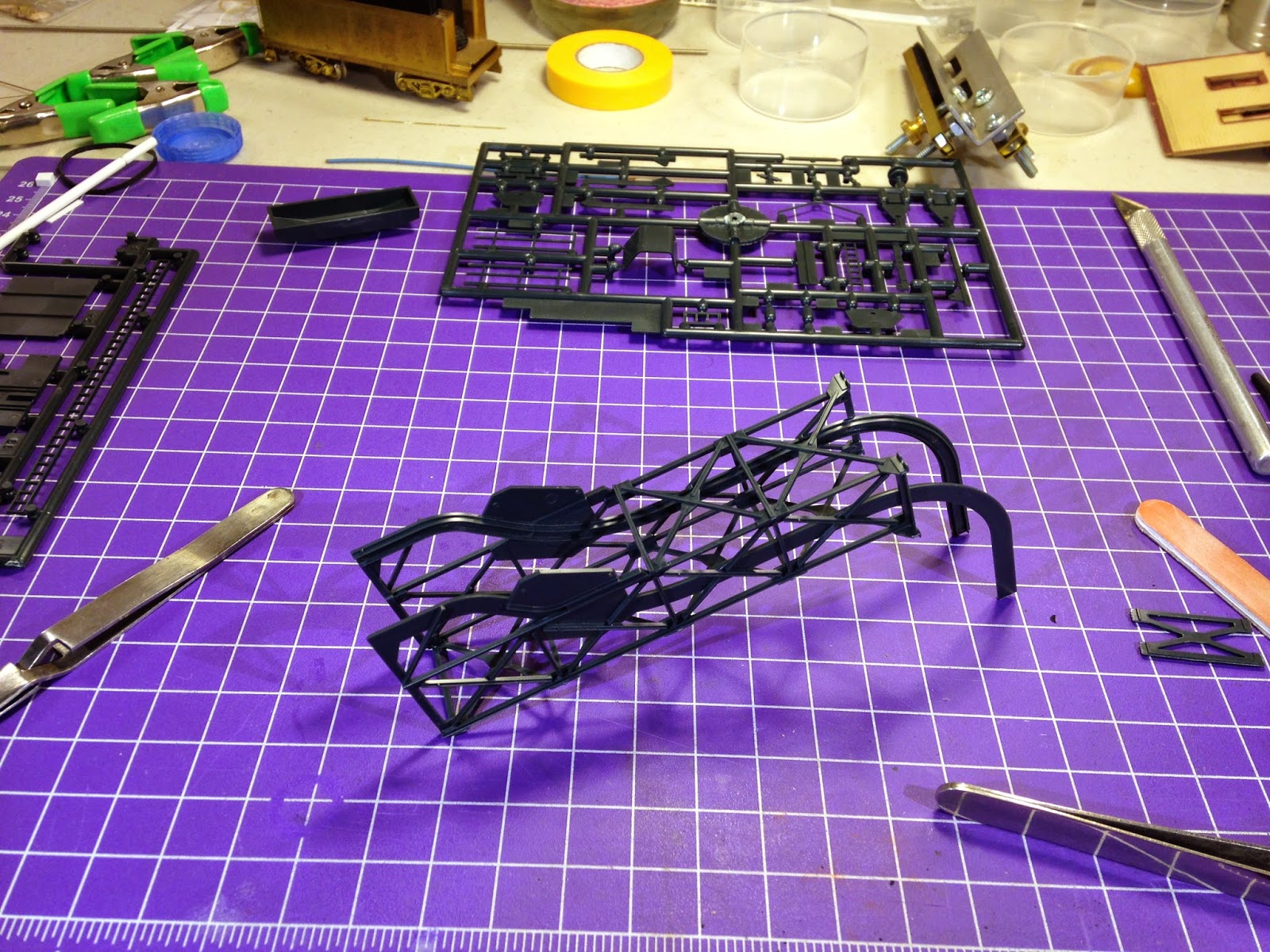 Assembly was pretty straightforward, though some of the parts were difficult to put together. Many times I really could have used a third - or fourth! - hand. But if you take your time, and use thicker glue to tack things together until you can add more glue, things go together fine. 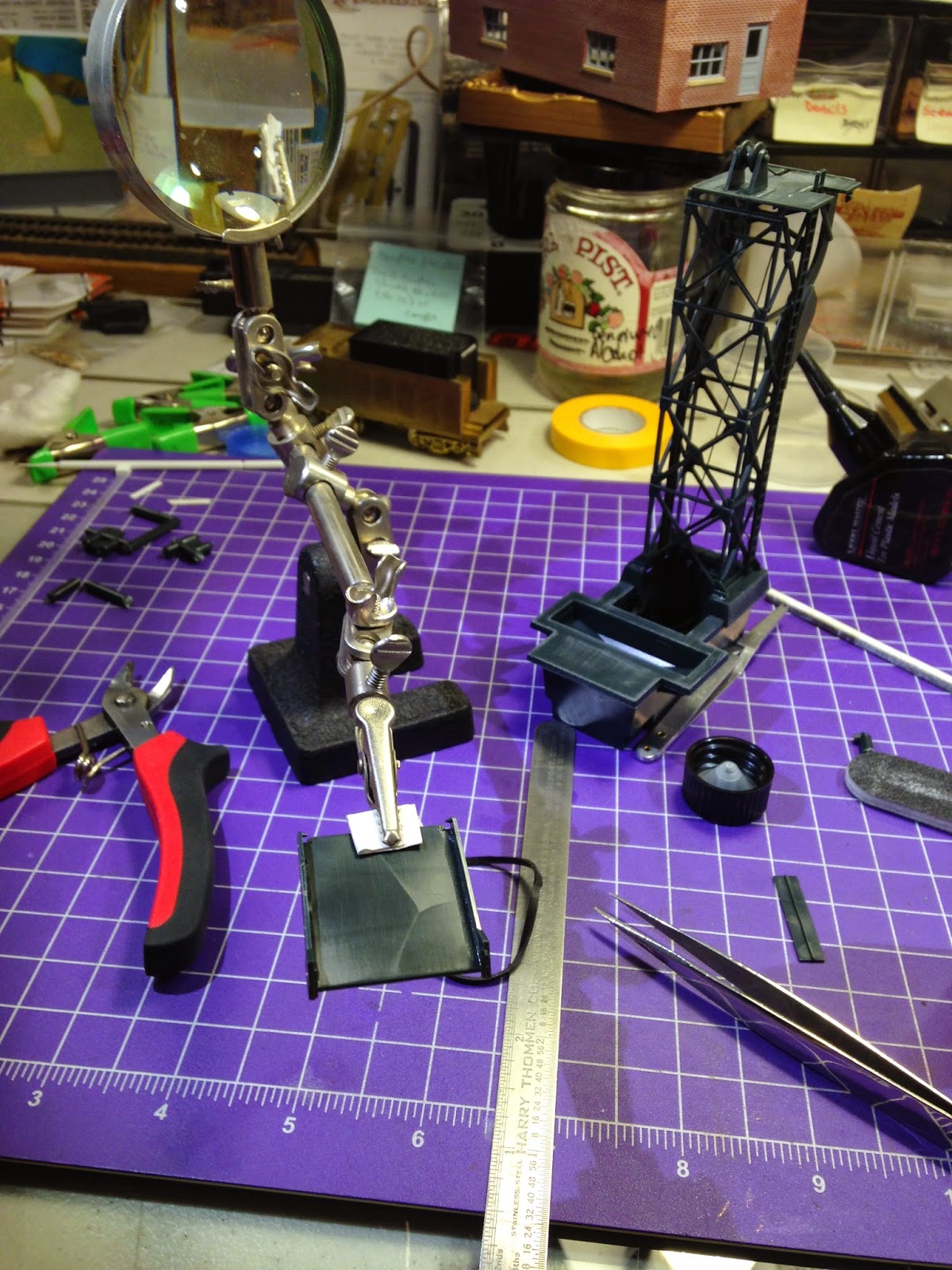 After complaining for the umpteenth time that I needed a third hand - I finally realized I had one(!) Unfortunately, most of the kit was already together. Fortunately, I discovered this handy tool just in time for what would have been one of the toughest parts of the assembly (the coal chute itself). 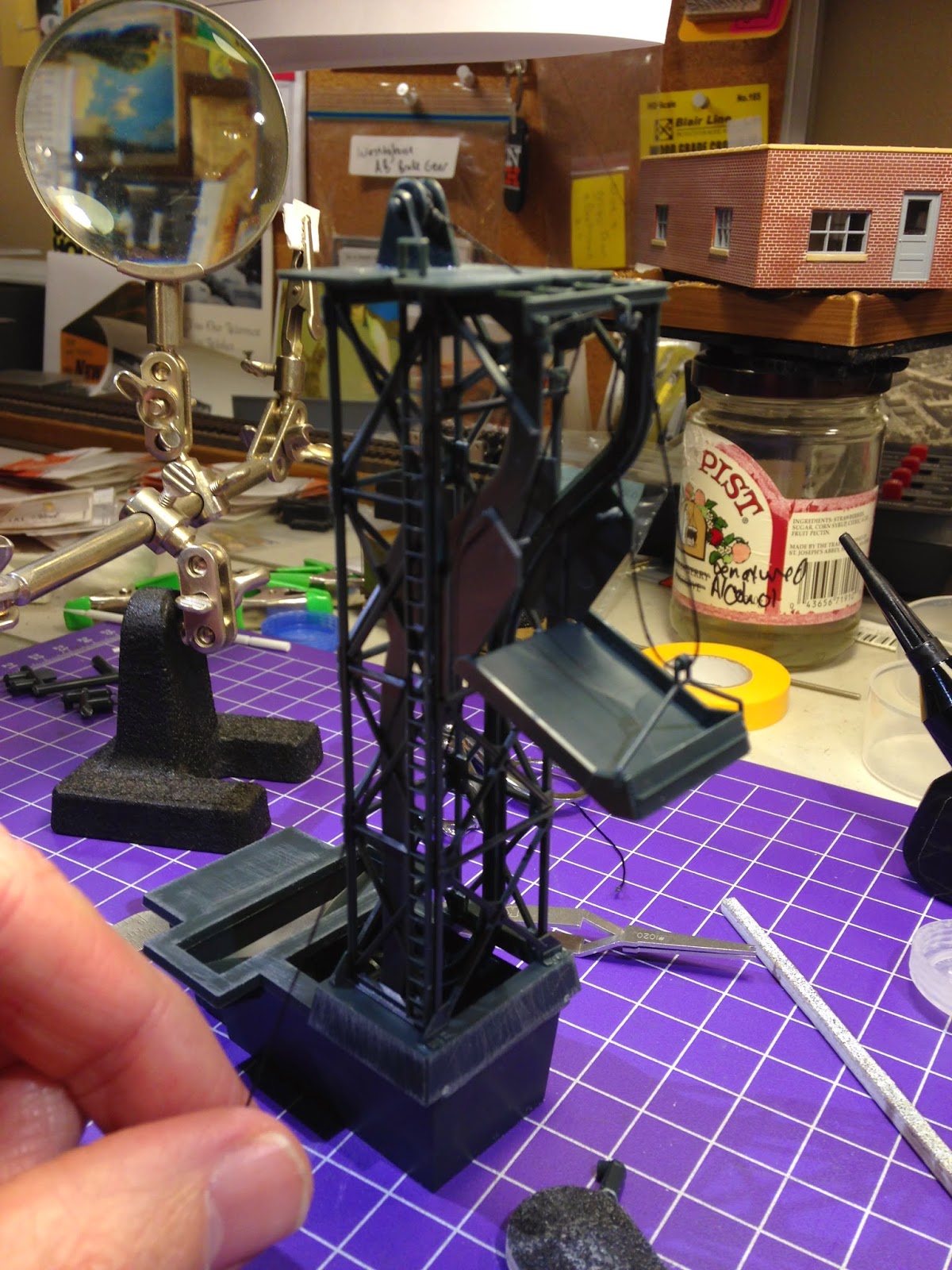 Stringing the rigging was actually pretty satisfying, though it did give me an even higher appreciation for what shipbuilders go through. I'm sure there are better, more specialized tools that would have made this process even easier, but a pair of tweezers was all I ended up using.

And I glued the thread to the pulleys with ACC and ZipKicker (click here for a great tip on using these together) which had the effect not only of holding the thread, but it stiffened it as well so it didn't droop and look like, um, thread.

Unlike the other structure kits I've built recently, I just assembled this without prepping/painting ahead of time. It'll be all one color black, so I figured I'd just paint it after it was built.

Since I wanted to paint on Tuesday (which was the Snow Day!) here's where things were as of Monday night: 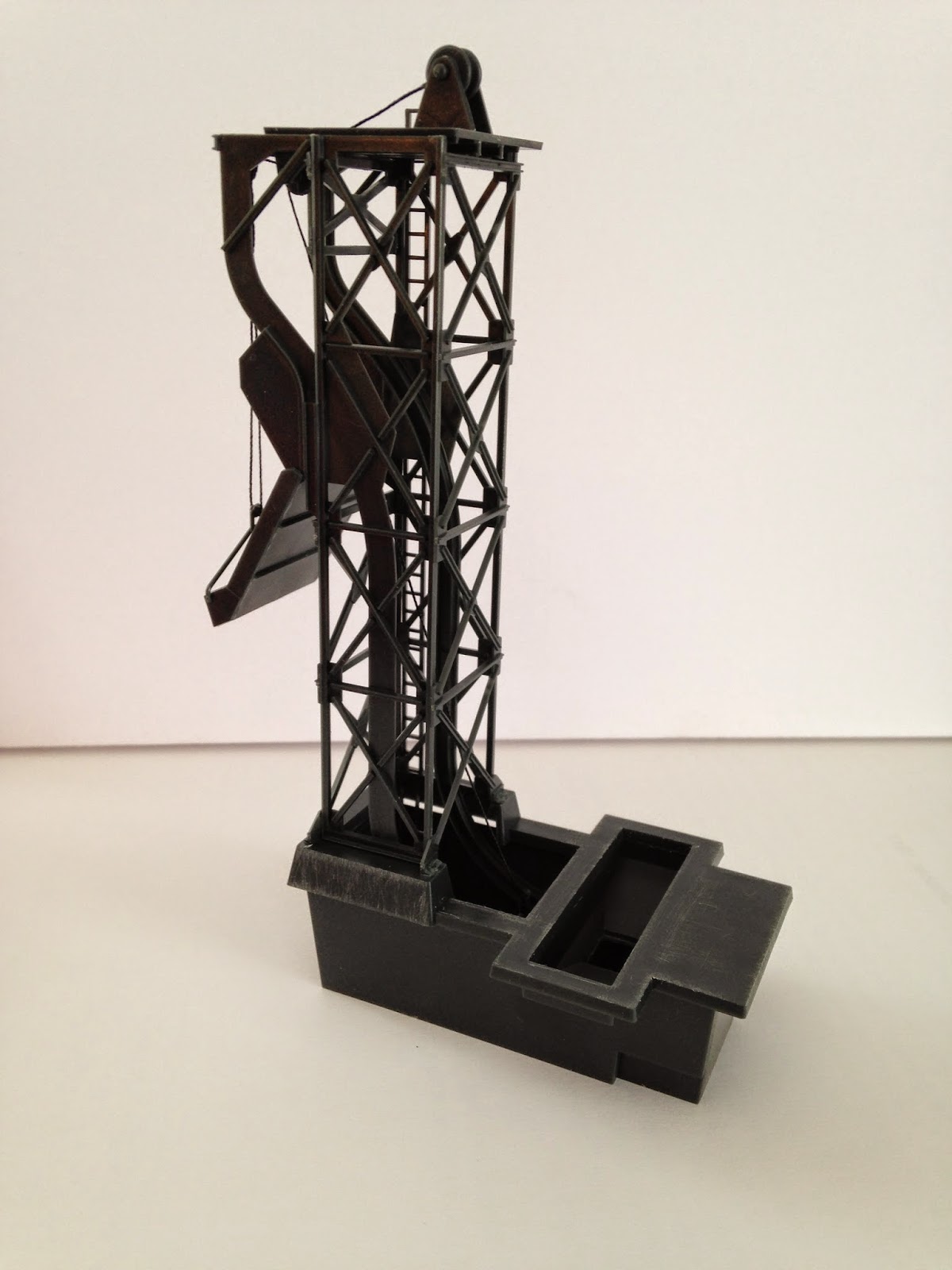 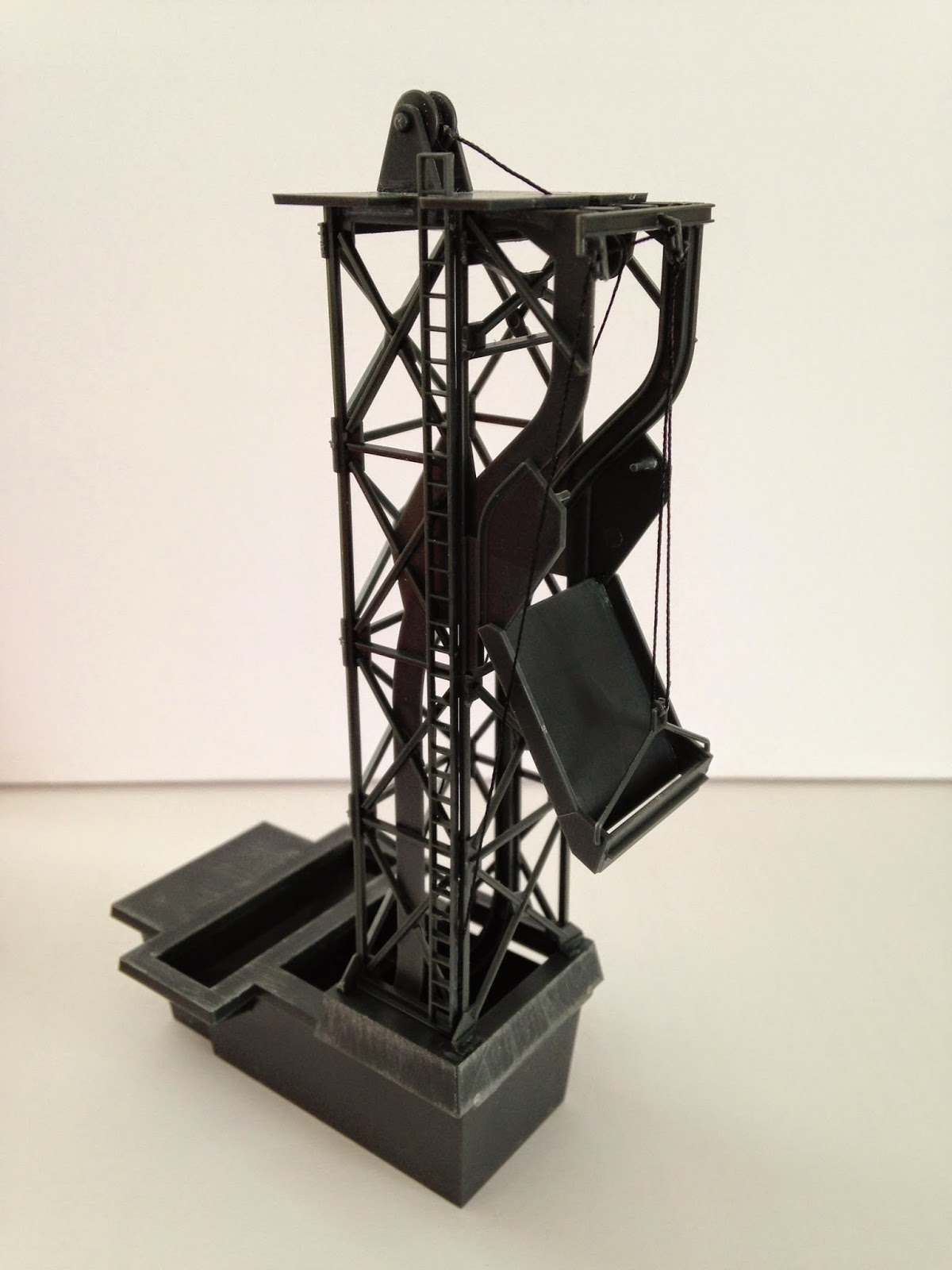 It already looks different from the kit - and more like Valley Coal - by not having the shed building over the winch. But it lacked something. It needed a railing...

So, I figured I'd consult the Google on the Internet Machine and learn what "typical industrial railings" were made of, and what their dimensions are. I came across this site and this site which gave me the information I was looking for - check them out if you want to learn more about prototype railings (don't laugh - it's actually interesting). But if you just want to know what to use to model them, here's a list & assembly steps: 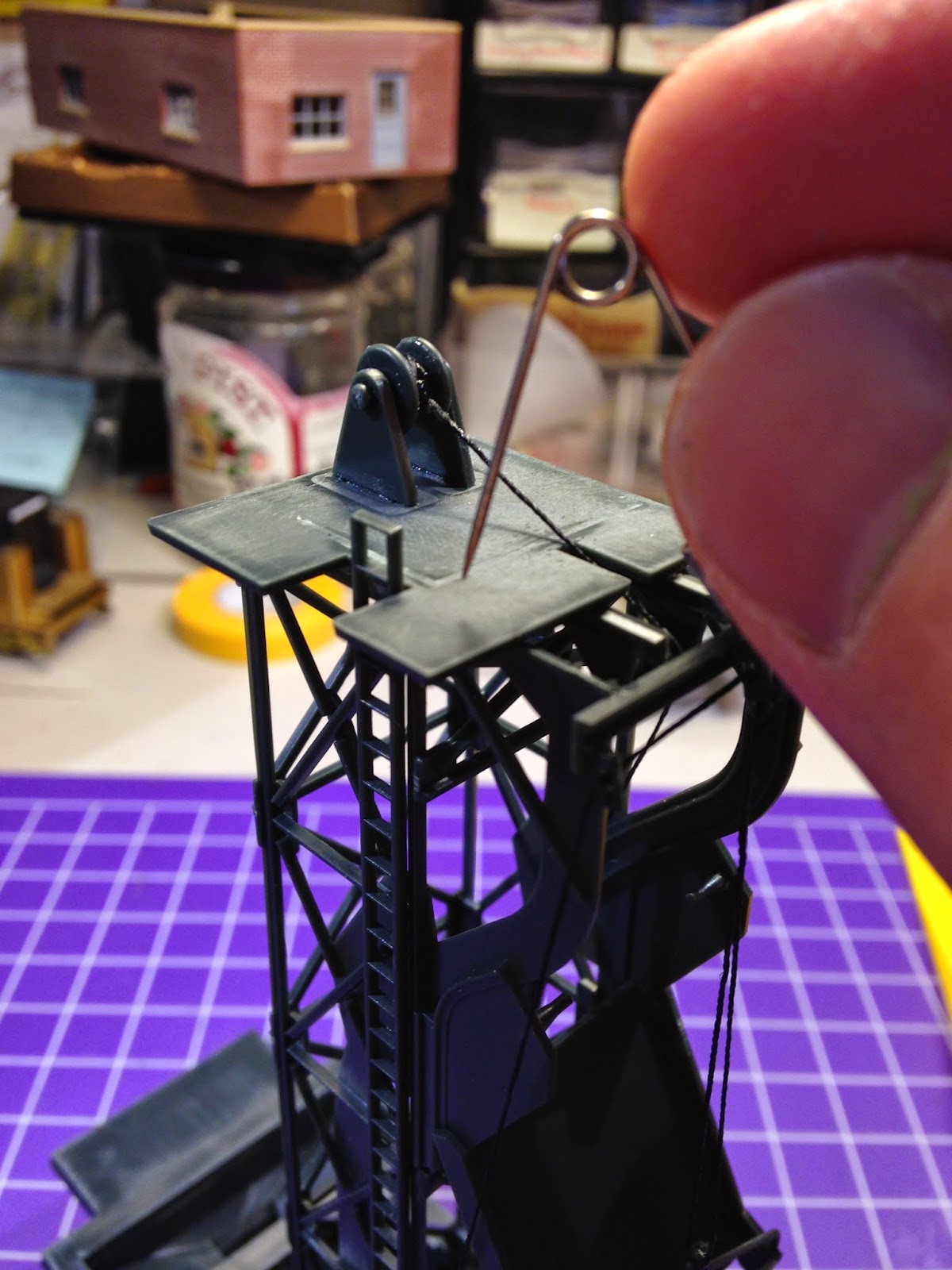 My first step was to use a safety pin to make dimples in the platform where I wanted the railing posts to go (dimples keep the drill bit from traveling all over). 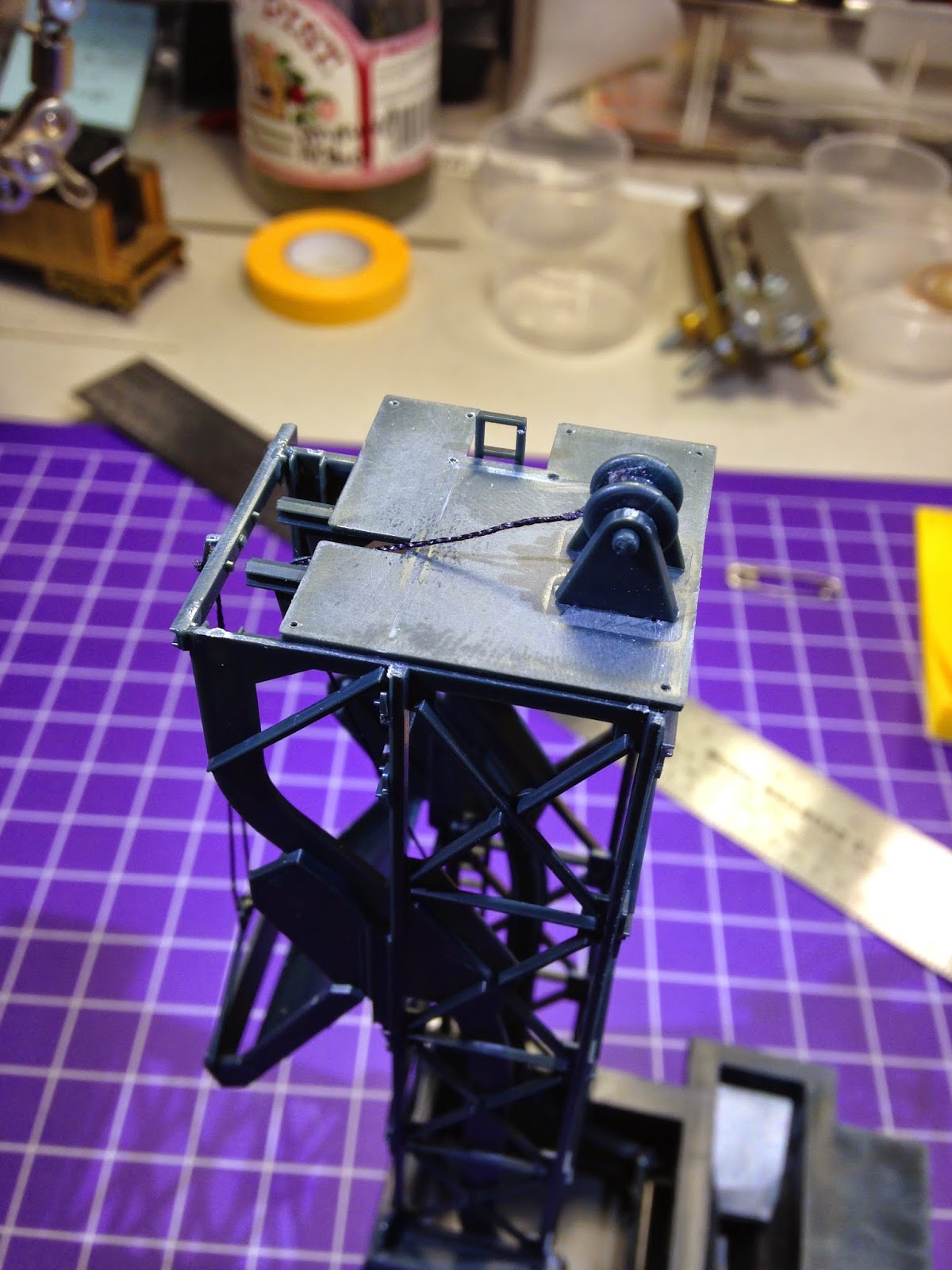 Then I used my handy-dandy Dremel, outfitted with a flexshaft attachment and a #75 drill bit, to drill holes for the .020" wire I'd be using. 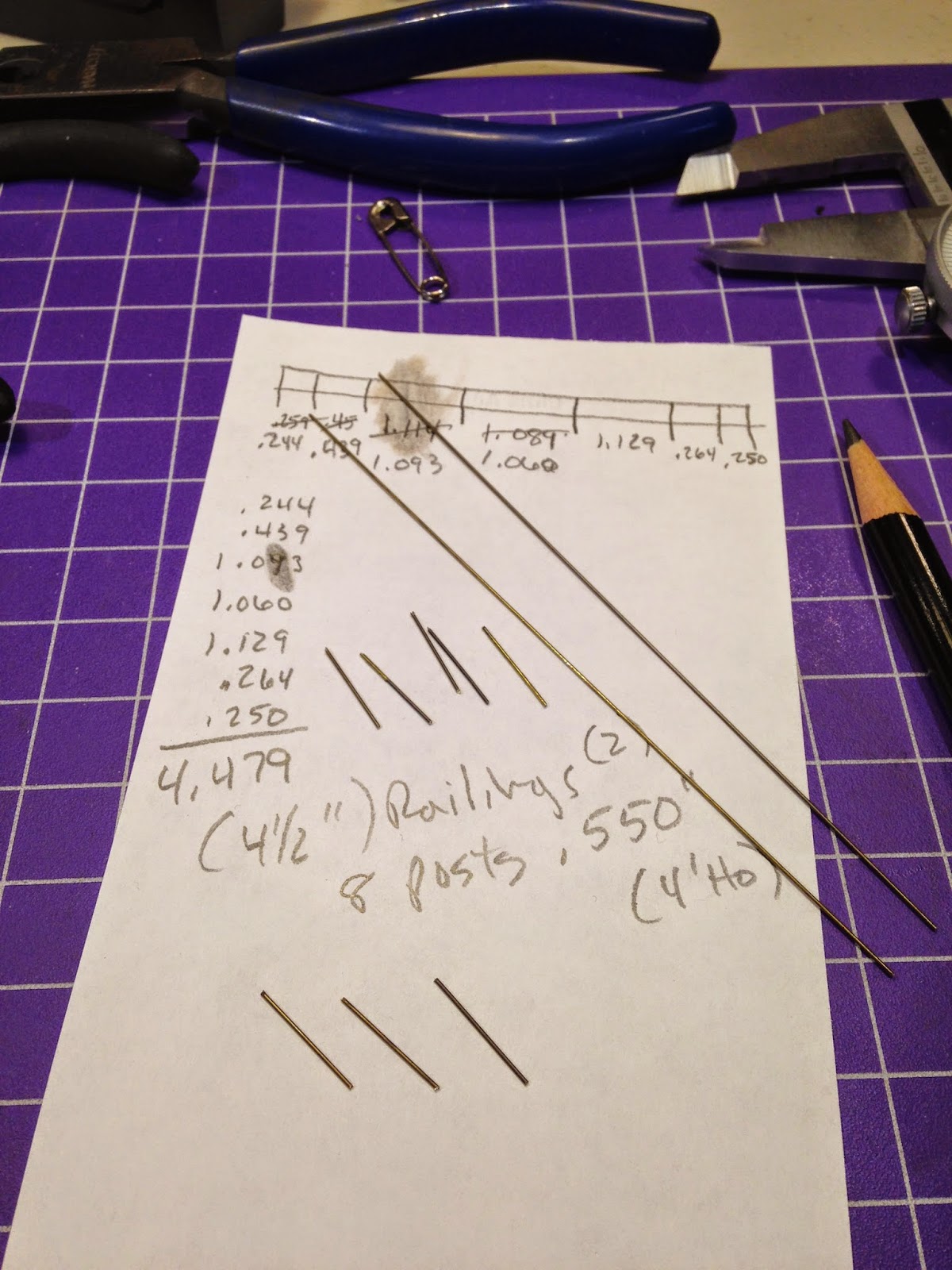 Once I finished the holes, I used a dial caliper to measure the distance between each hole. I'd use the sum of these measurements to determine how long the railings would be. I already knew how many posts I'd need (8 holes = 8 posts).

Next, I took a piece of scrap wood to use as a base for my soldering template. To make the template itself, I used my caliper to transfer the measurements between the posts to the wood. 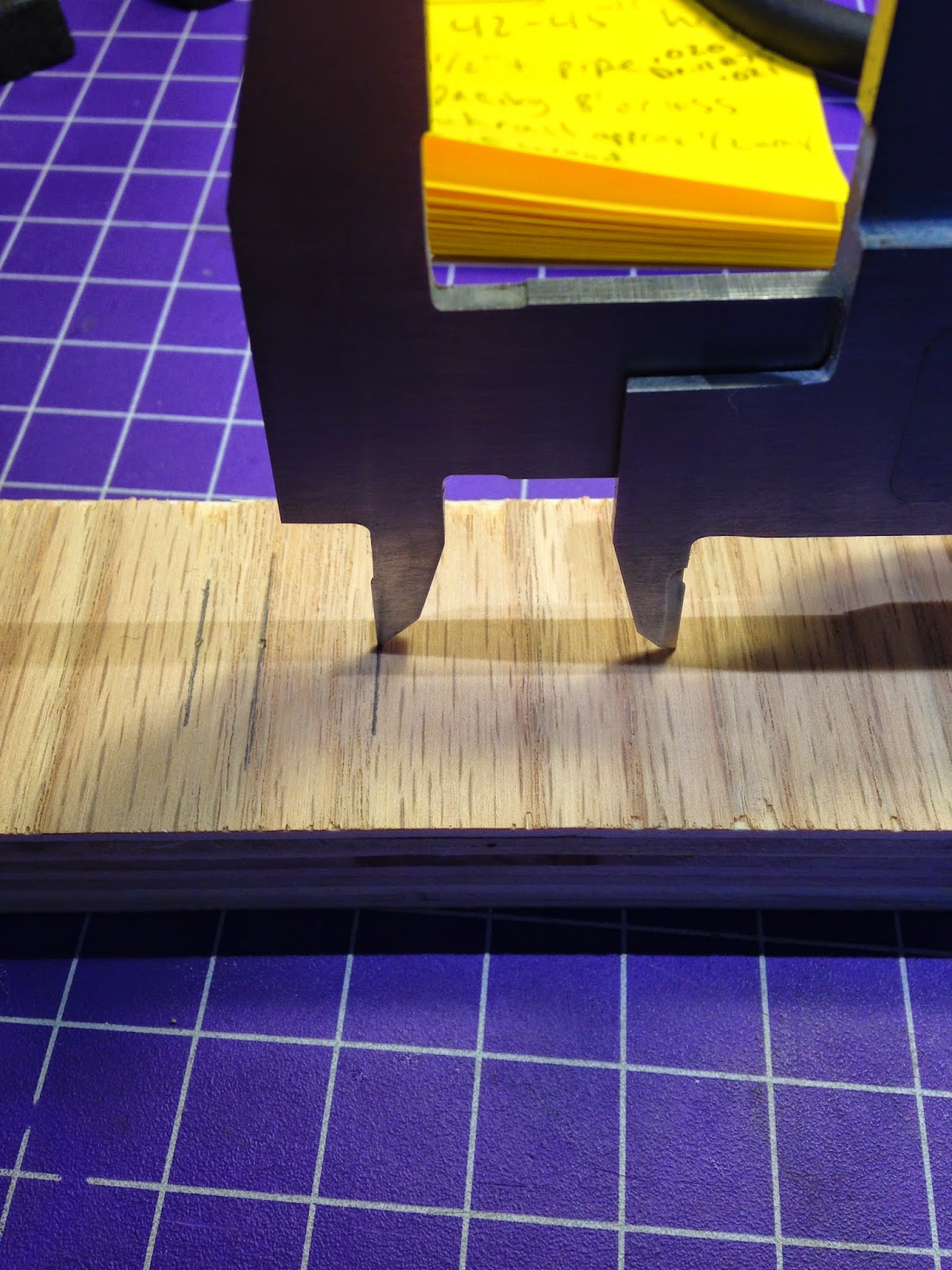 I drew all my posts first, then drew my top railing and then my middle railing a scale 2 feet below: 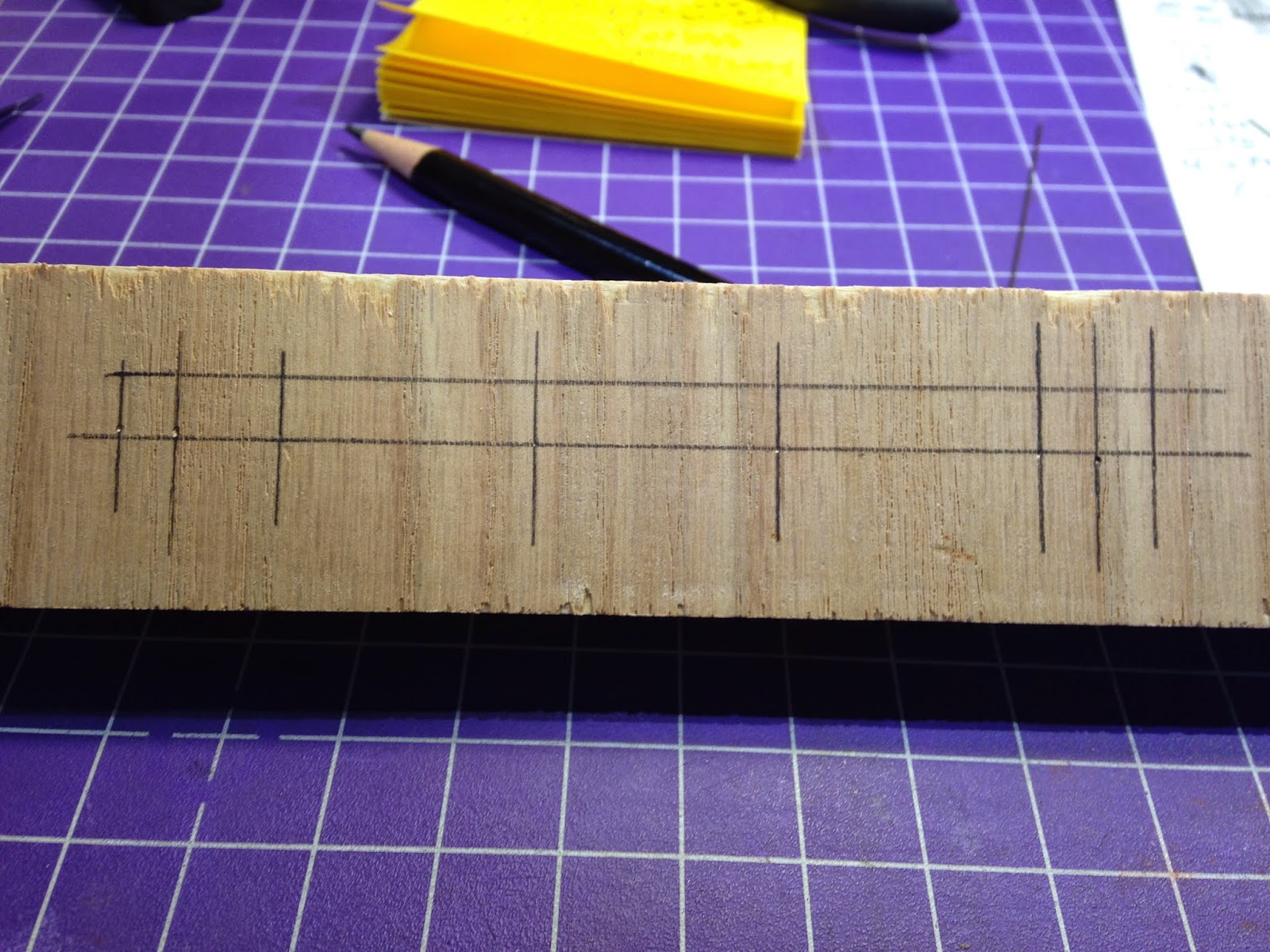 Once I had my template done, it was just a matter of cutting the .020" wire to proper lengths and taping them to the wood to hold them for soldering: 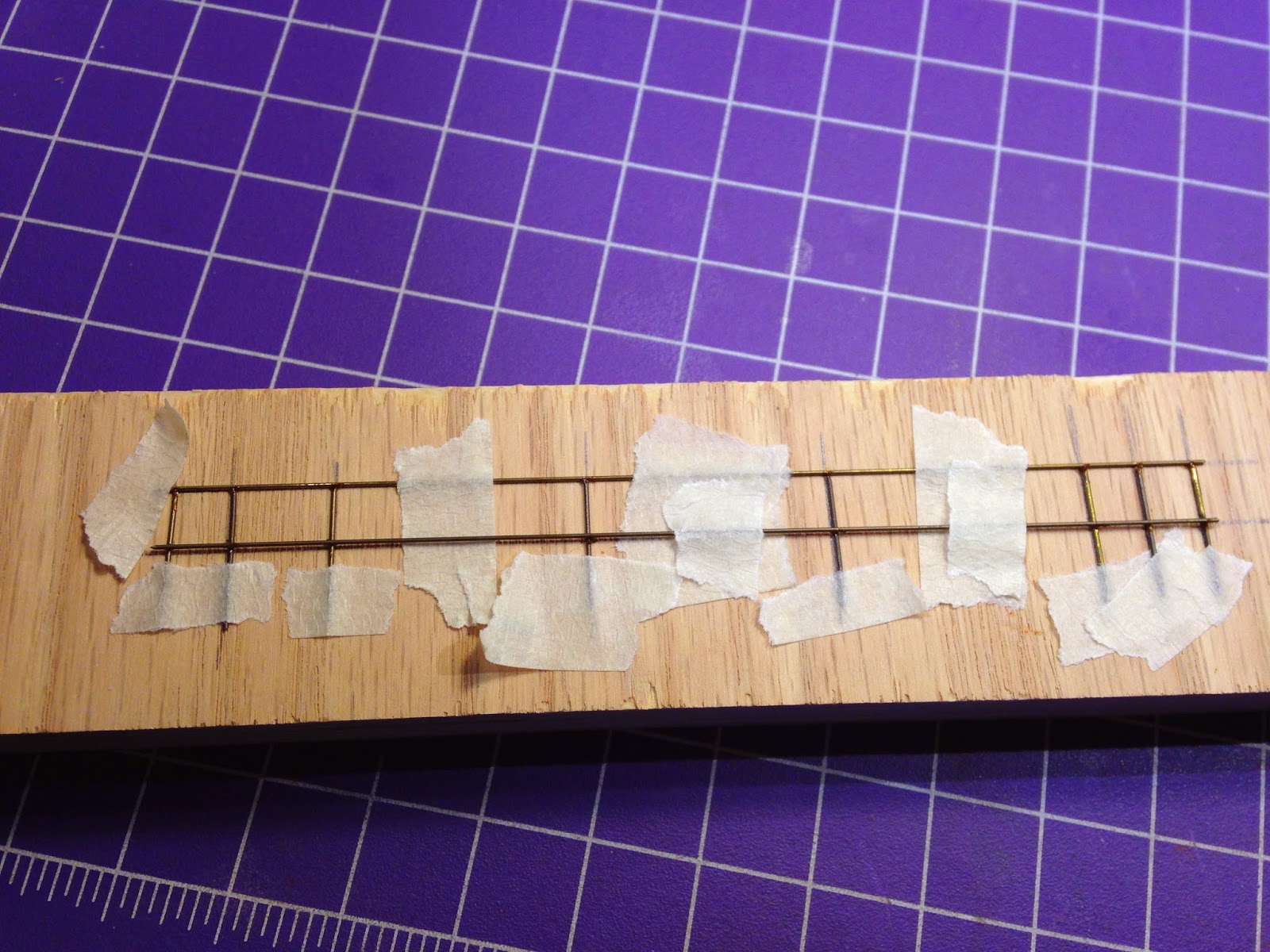 Use good soldering practices (clean, flux, hot iron) and you'll end up with something like this: 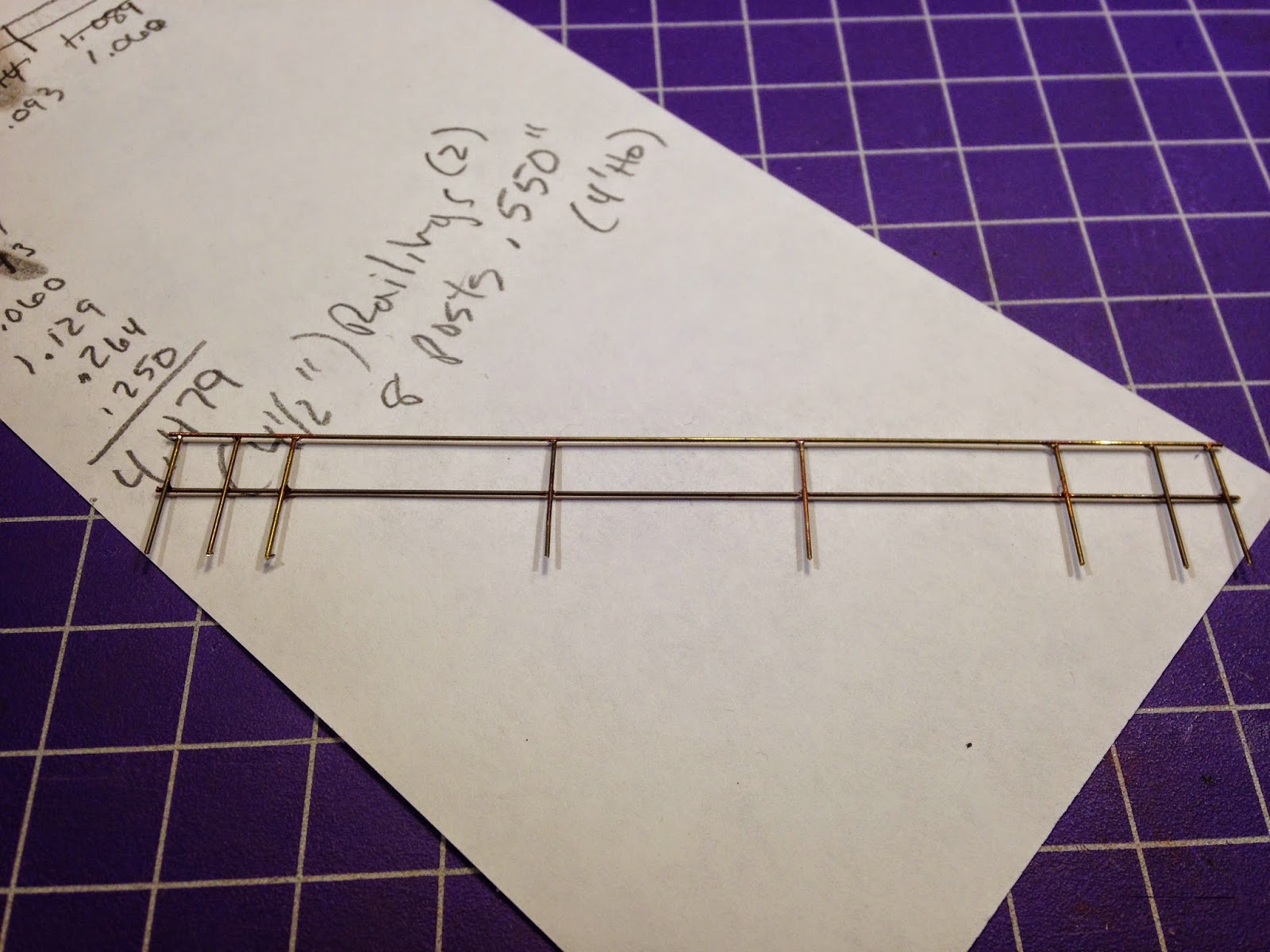 Use poor practices (as I did), and when you go to bend the railings to shape, they may end up like this: 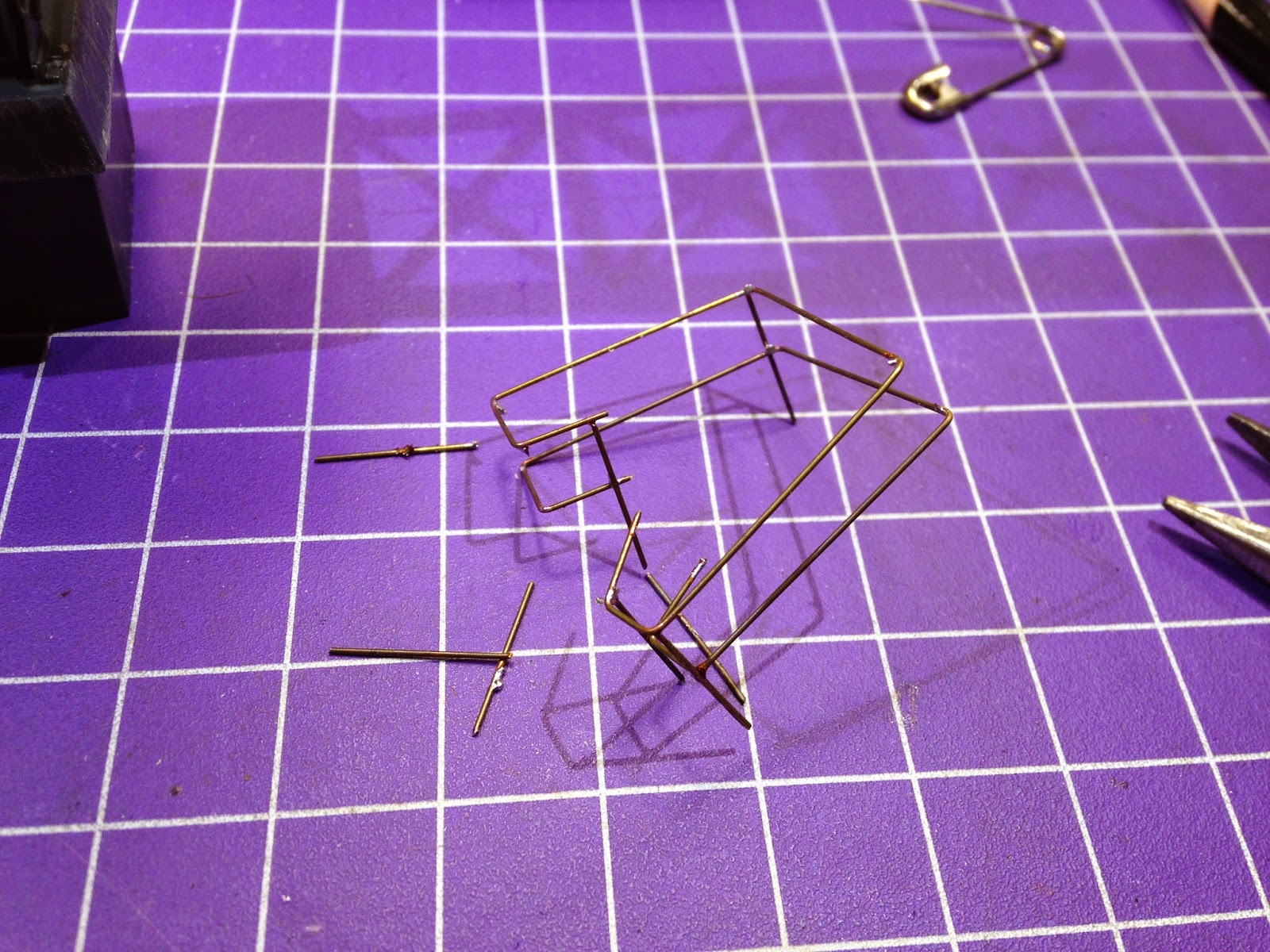 The above photo is an example of a few things:

At this point I was just about ready to chuck the whole railing idea. But "in for a penny in for a pound" - and I'd already wasted spent almost 1/2 my snow day making a railing when I should've been painting. So I just manhandled the railing into position as best I could, and ACC'd the posts as needed. 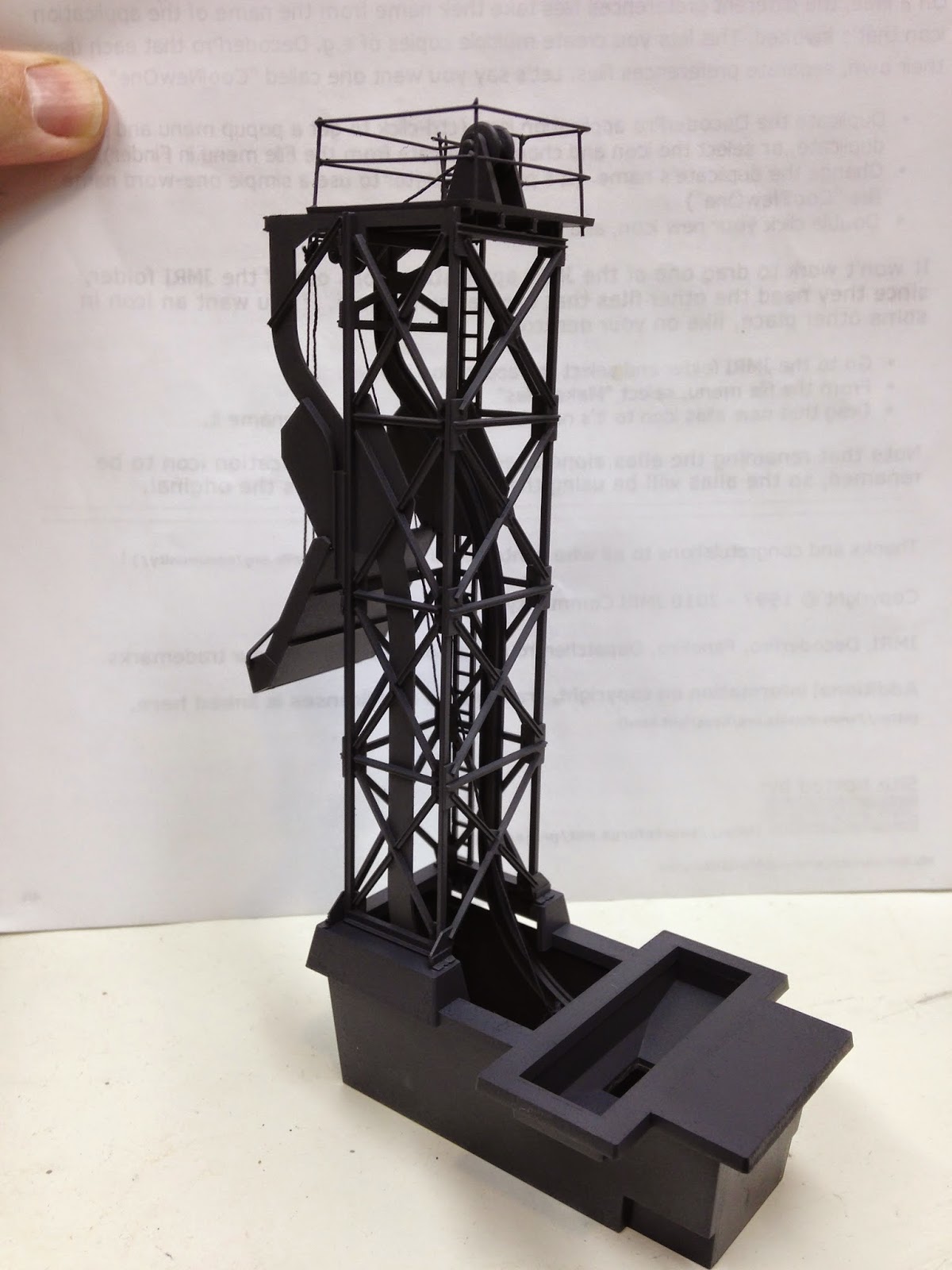 The result isn't as nice as I would have liked, but it's a LOT better than nothing IMO. They look prototypically "battered" at least(!) 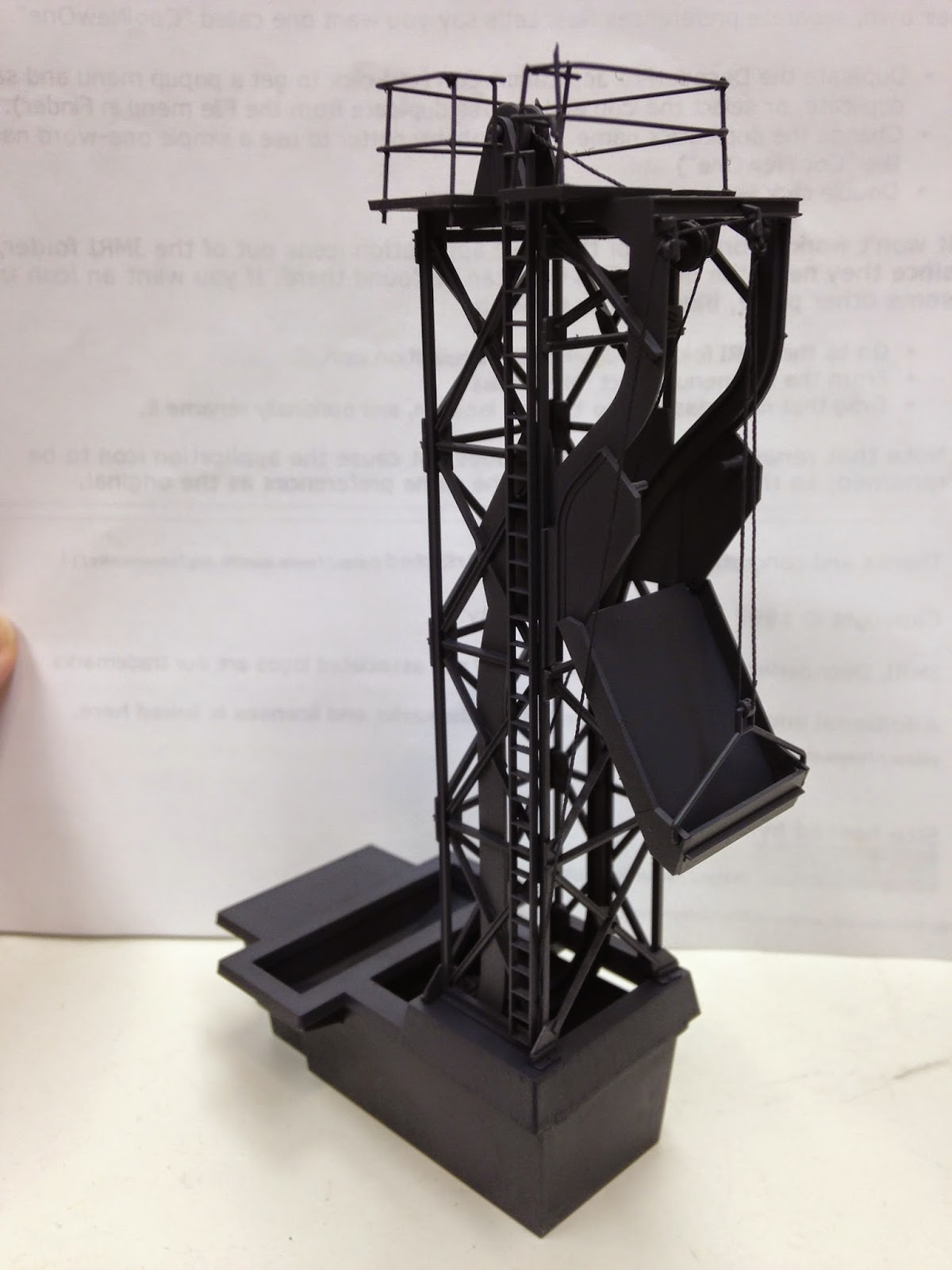 All in all, I'm satisfied with how it came out. Airbrusing a coat of Grimy Black over everything makes it look even better and blends the railings in with the rest of the structure. 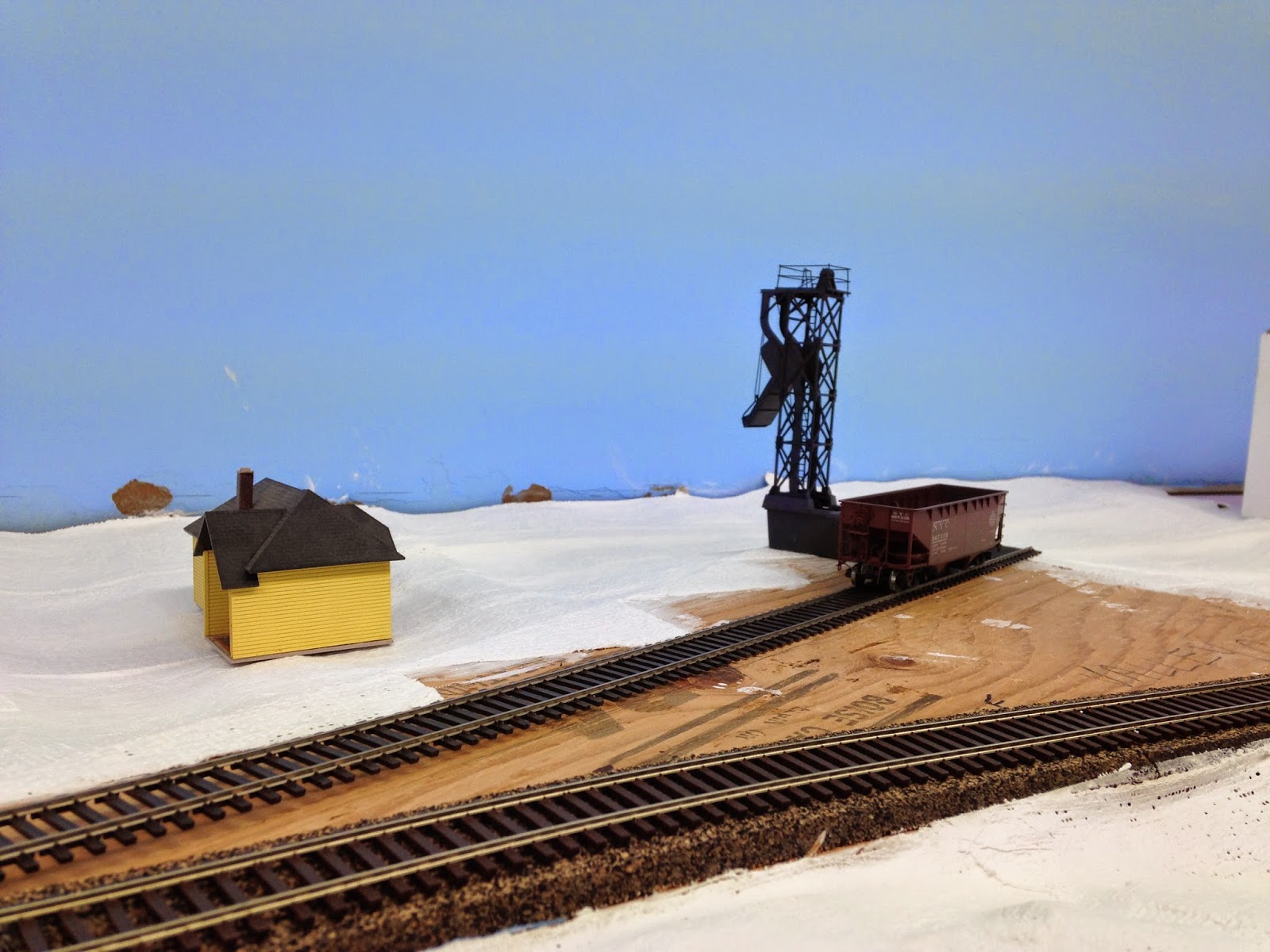 And here it is in place temporarily on the layout. I have to cut a hole in the plywood and place the conveyor's hopper under the track, but this will give you and idea of how things will look. Compare this seen to the prototype photo at the top of the post. Hopefully you'll agree that I'd at least captured the "look" of Valley Coal even if it's not a perfectly prototypical model.
Posted by Chris Adams at 12:01 AM