The last time I did mortar lines on a brick building was c.1983. I'd just built my first structure kit (a Plasticville brick city building, IIRC). It was already molded in red, so "No Painting Necessary." But I'd read somewhere that you could get a neat mortar effect by applying white paint to the walls and immediately wiping it off. It worked great.

Fast forward over almost 32 years later, and I'm ready to try again on my Ballantine's beer warehouse. But things have changed - I've become a more "sophisticated" modeler. I actually paint the brick walls on my kit (heh - it helped that the brick was molded a "stucco" color and I wanted my bricks to be red).

But therein lies the problem - adding mortar lines isn't as easy this time around.

I'd heard of a technique using joint compound, and I tried that first. My efforts are in the photo below: 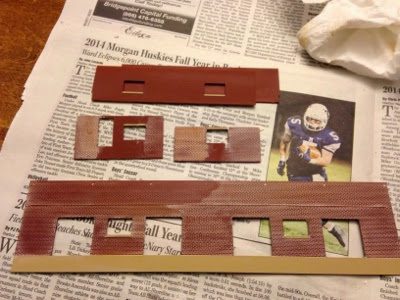 As you can see, the effect is underwhelming. I think the problem may be that the brick red paint I used was Floquil - flat flat flat. And I suspect the reason the compound isn't coming off the face of the bricks as nicely (as it would if the bricks were unpainted styrene) is that the flat brick paint has taken in some of the compound (it hasn't absorbed anything - the walls have been drying for almost two months(!)). Fortunately, that long wall is the wall that will be facing the backdrop. And the other walls won't be used in the final build, so I have some more chances to practice.

The next technique I tried was a wash of light gray PollyS (water based) paint, thinned 3:1 with acrylic thinner. That came out better, but still heavy (too light in color).

Finally, I'm trying thinning 5:1 with 91% isopropyl alcohol. Apply with a brush, then wipe off. That seems to be working ok, though I'm not sure about using alcohol rather than water (or acrylic thinner) to thin PollyS paint. But I thought the alcohol would evaporate more quickly and leave the color in the lines more easily.

What technique do you use for adding mortar lines to your brick walls? Do you paint the walls a brick color first? Does it matter whether it's a glossy or flat finish? Do you ever use alcohol to thin acrylic/waterbased paints?

Let me know - as always, any thoughts/suggestions/guidance are MOST welcome!
Posted by Chris Adams at 5:14 PM