This is a story of how easy it is to get, um, "sidetracked" when working on your model railroad. Fortunately, those diversions are usually pretty fun - if not always highly productive. But this time was different . . .

I found myself with a little extra time while helping the Missus redo a bathroom closet. Heh - you can do a lot of things while literally waiting for paint to dry! So I decided to tackle the backdrop in Wethersfield. First step: Create "depth" on the plain sky blue masonite by misting on some flat white paint near the bottom, feathering it into the blue as you go up. 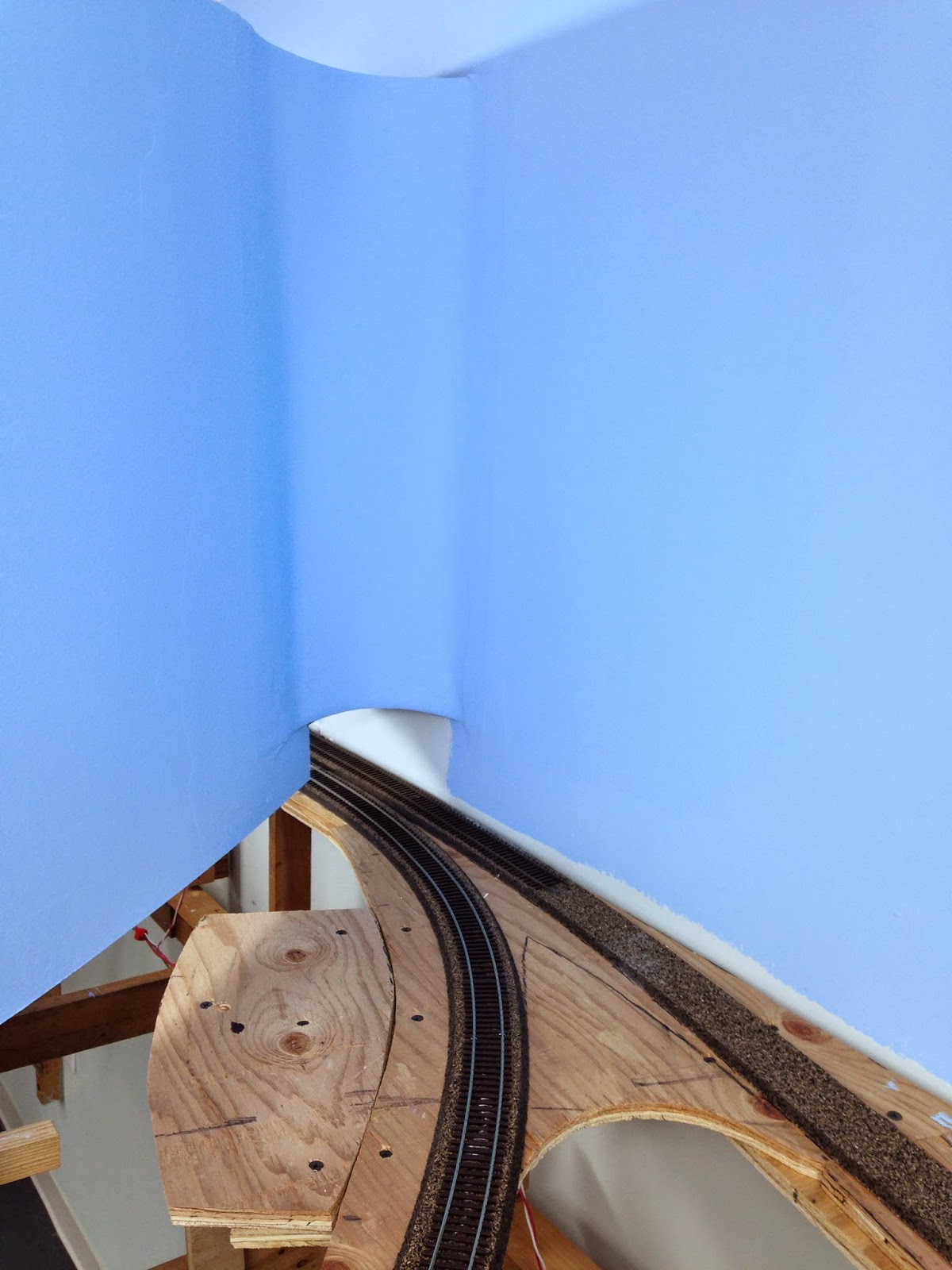 Ah! But before I could do that, I had to redo a section of backdrop - specifically, the "north" end. It's way too "in, "abrupt, and sharply curved. Good for access, lousy for mounting a Hartford skyline photo. 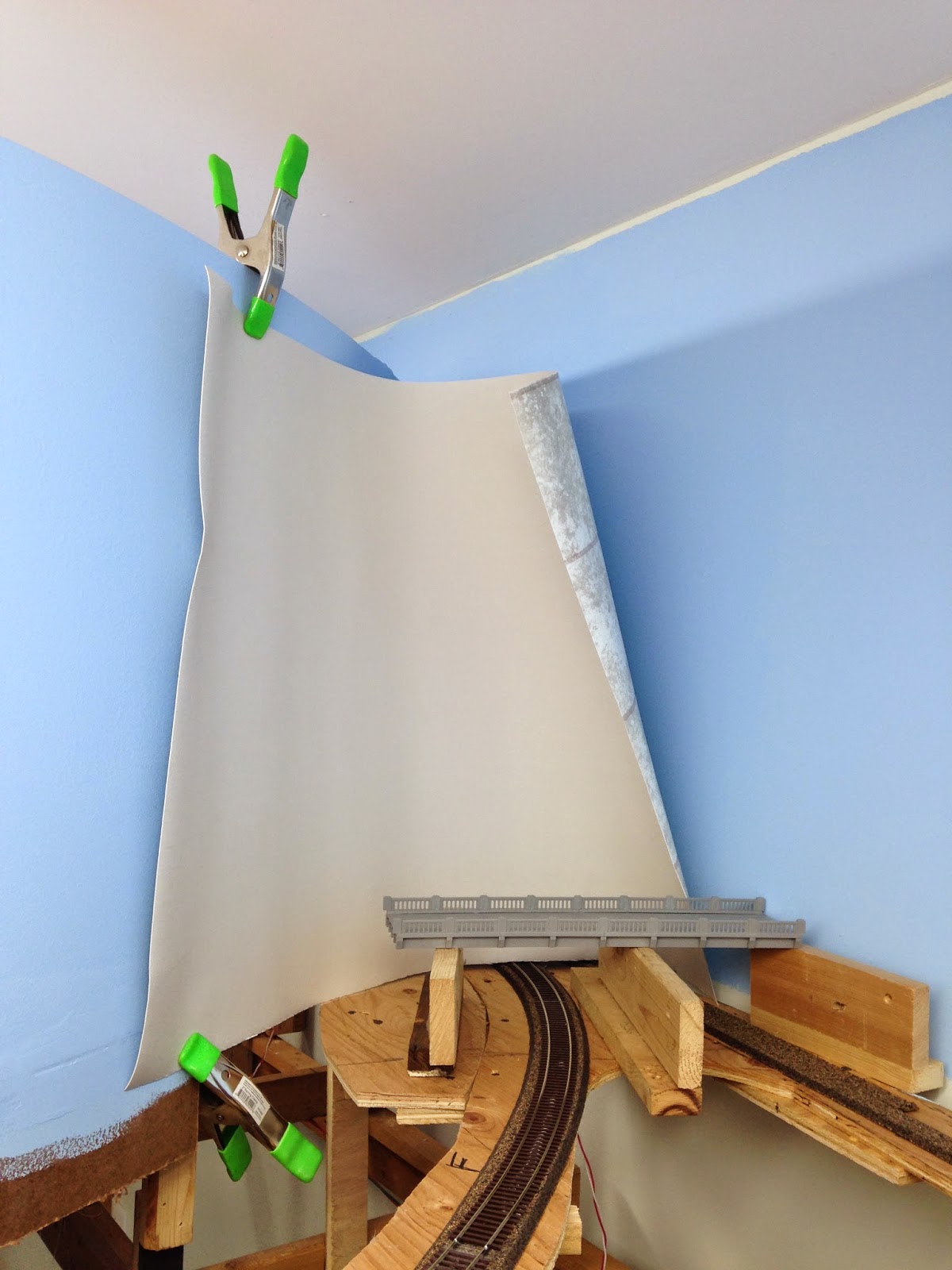 So, out came the vinyl. I figured I could make a much flatter backdrop in that area behind the bridge and it would be a much better base for any photo backdrop I'd want to add. As you can see, I had started mocking it up and was just about ready to glue the first end when it occurred to me - how would I install the rest of the Berlin branch? (you can see the roadbed for it on the right there) Once that vinyl's in, it'd be near impossible. 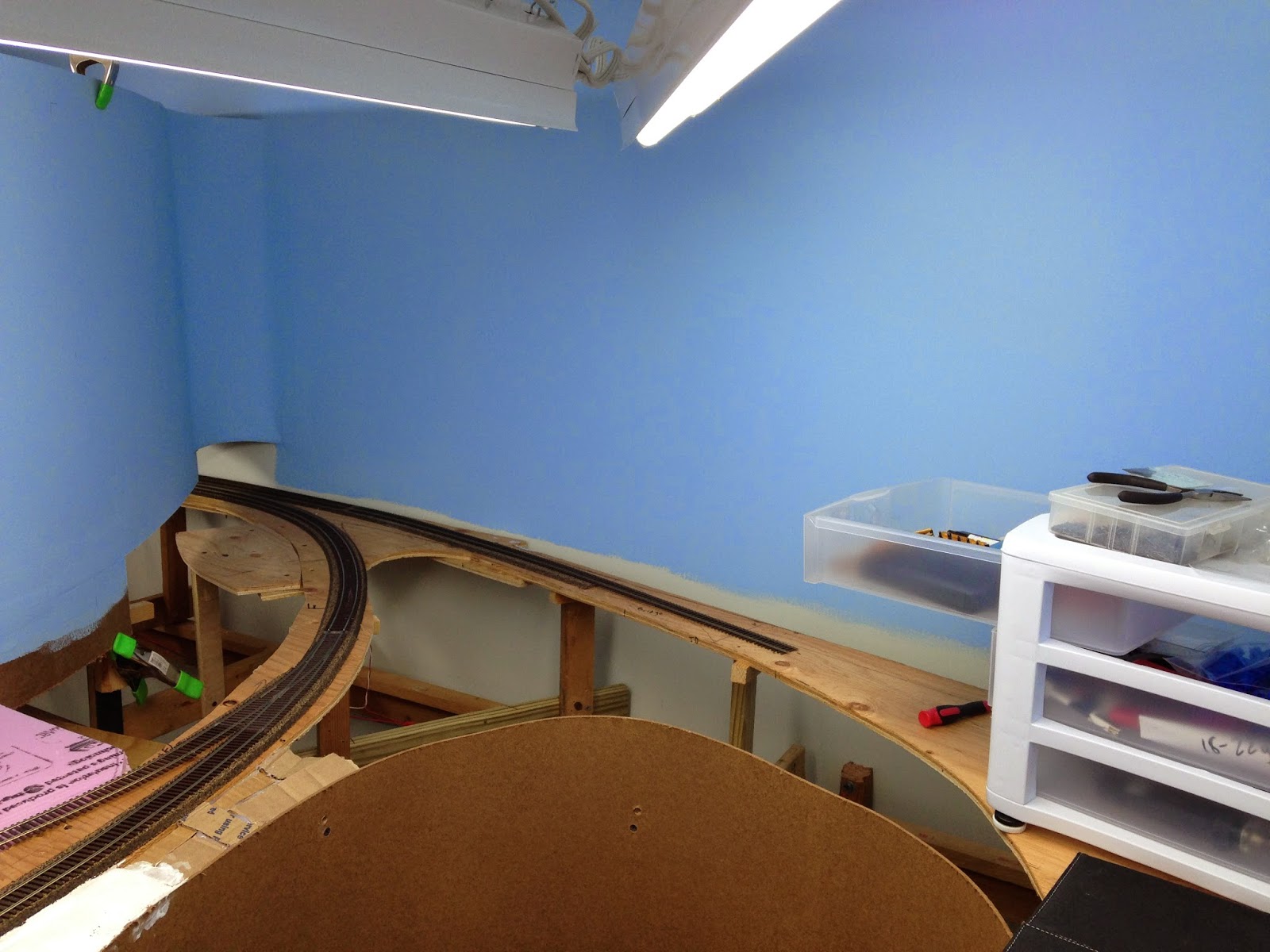 So, out came the vinyl (from where it had been clamped) so I could install some track for the Berlin branch. But about where the 3' section of flex track ended is where the Mattabassett River is supposed to be. "Why not go ahead and cut out the subroadbed for the bridge?" I asked myself. 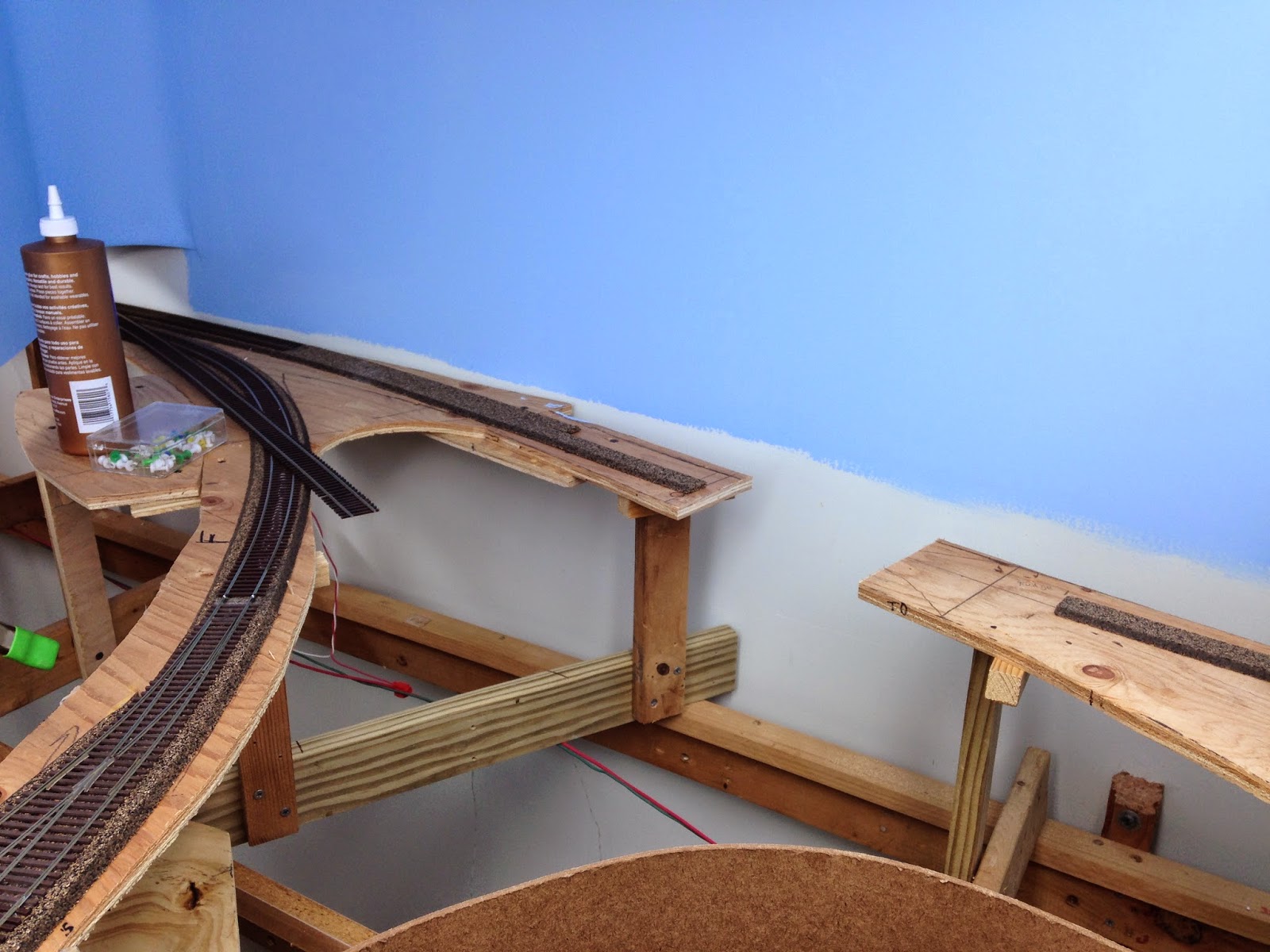 Why not, indeed. As I may have mentioned before, benchwork and tracklaying are the things I enjoy most - so far at least, and probably because I've had so much practice (may layouts seldom get beyond the benchwork/trackwork stage).

I eyeballed the location of the bridge, measured the bridge I'd be using (a 50' through girder) and cut the plywood accordingly. I may have cut the gap a bit short, but it's always easier to cut more than to try and add back. 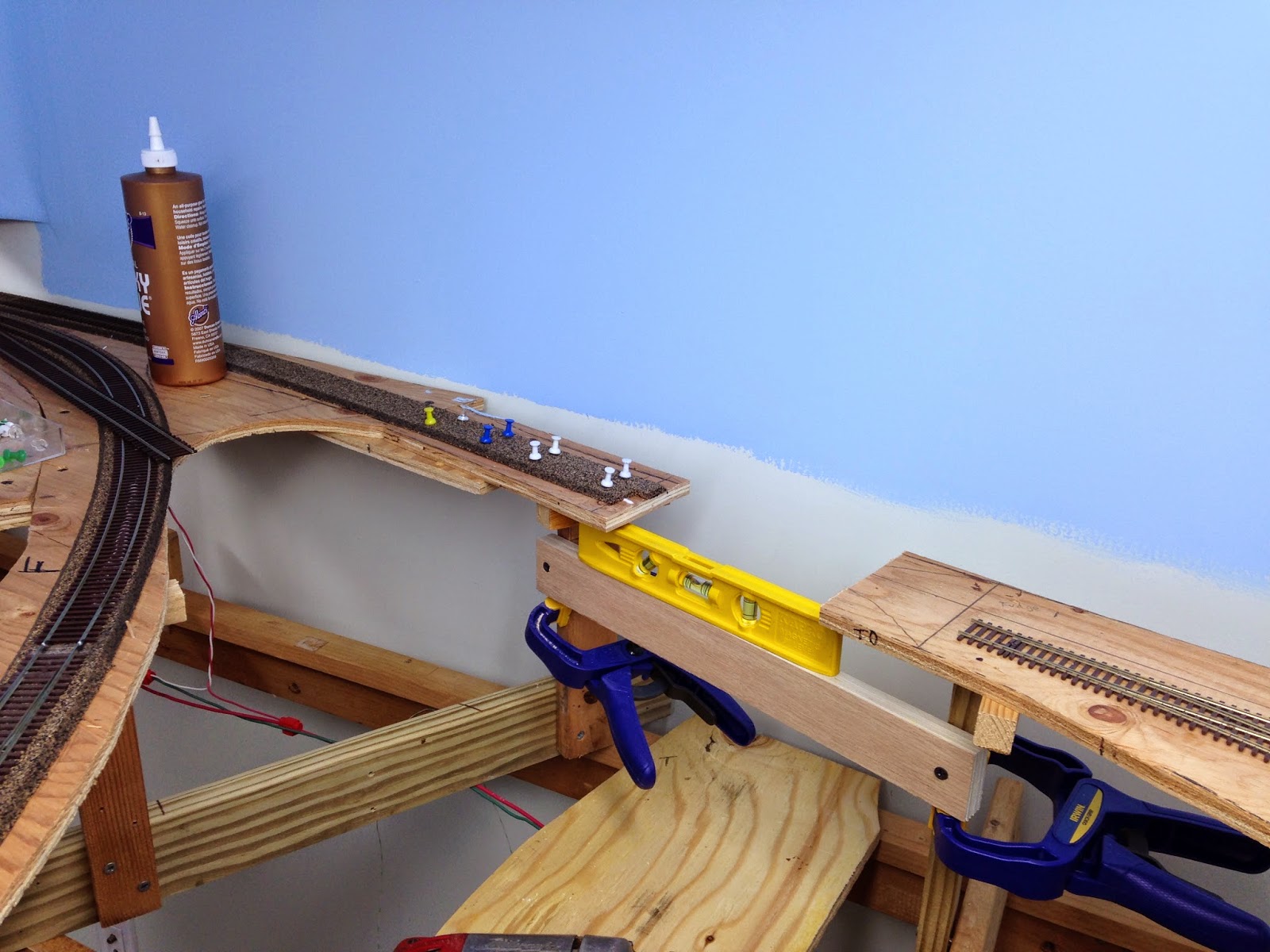 Next step was to add bracing for what would become the river base. After giving a lot of thought to how high the bridge would be relative to the river (and fortunately having a prototype photo of the area to help), I settled on 1.5" - be sure to take the thickness of the subroadbed and riverbase into account. 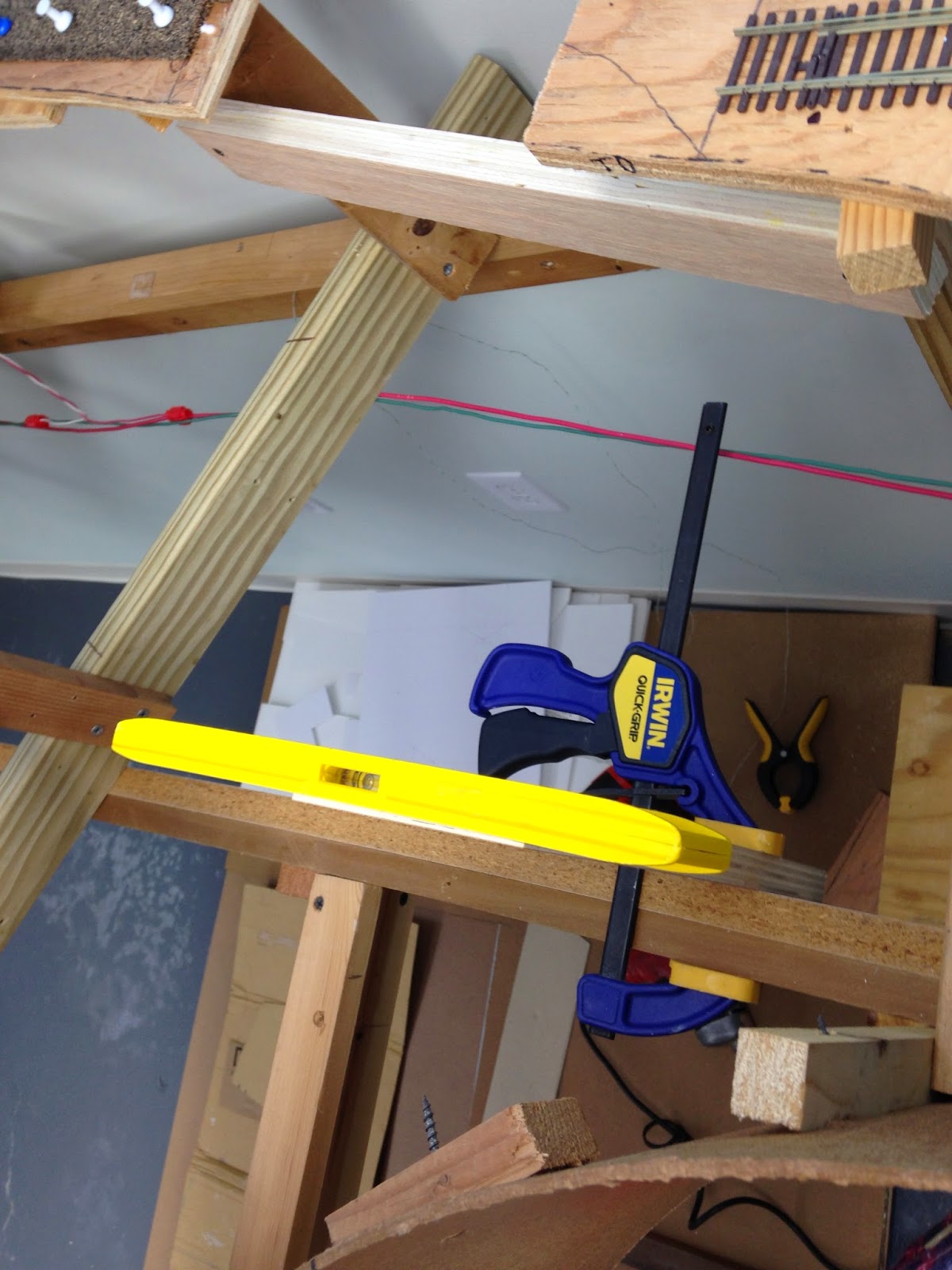 This is an overhead view of the additional bracing. You can see that I installed a cleat right onto the back of the fascia, to have something to attach the end of the riverbed to. Clamps and a level are your friend - it's especially important to keep the plywood riverbed level since you'll be pouring resin on it at some point. 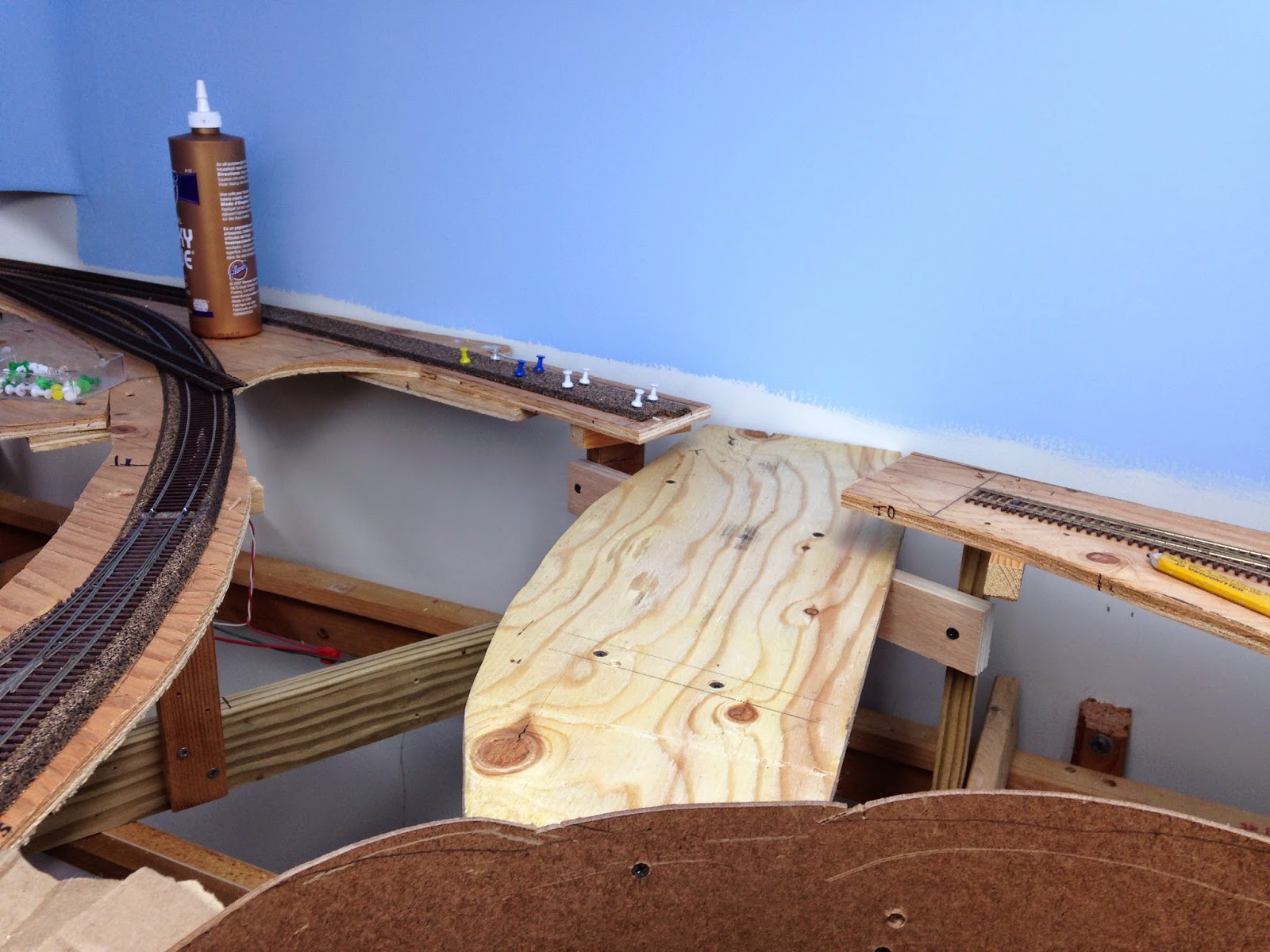 Here's the riverbed installed, along with additional roadbed glued down and tacked. I also had marked where the "shore" should be cut on the fascia and used my saber saw to cut it out (note the "oops" that can easily be filled in later). 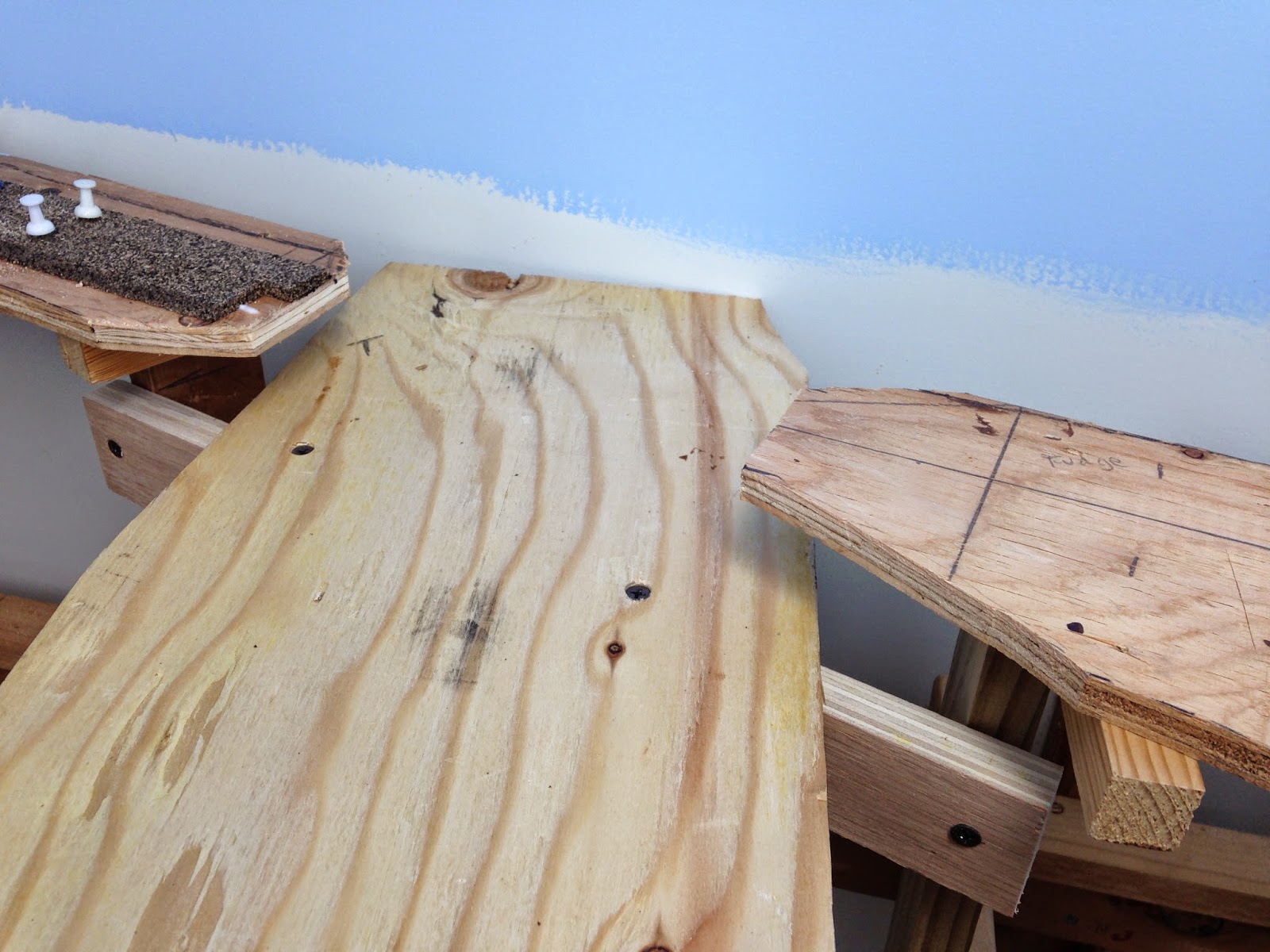 I decided after the river bed was installed that I wanted to taper the track subroadbed (note the difference between the photo above to the preceding photo). I figured doing so would help with scenicking later. So out came the river bed (the saber saw blade wouldn't clear it), I tapered the subroadbed, and reinstalled the river bed.

So the backdrop still isn't done, I still need to install the additional vinyl first, but I might, just might be able to have the track & industries in E. Berlin by the next operating session. I suspect the additional operating interest will be more noticeable than the still-just-blue backdrop.

Distractions don't always have to detract from what you're doing. Sometimes these little diversions - or, as in this case the not-so-little diversions - can really get your productive juices going and you end up making progress in a way you didn't expect and may not have even been ready for. And when "distractions" come like that, ride them for all they're worth. It's all progress and usually a lot of fun too!
Posted by Chris Adams at 6:33 PM