I've said before that it's ironic that layout owners seldom operate their own layouts, often playing host for operating sessions instead. Seems the only time we really get to participate in any way (other than by acting as dispatcher, trainmaster, or troubleshooter) is through a "pre-ops ops session" - aka ops session setup - where you get to act as freight agent, yard clerk, and transportation manager all at the same time.

Now though, with so many ops sessions on hiatus for the duration, many layout owners are taking this opportunity to scratch the operating itch by - gasp! - actually operating what they've built, all by themselves. And while I've been enjoying (and not enjoying) doing some modeling and making more progress on the layout where & when I can lately, my favorite aspect of the hobby - right after research - is operations.

Before you can operate though, you have to get things set up. The links above provide an overview, but I thought it'd be fun to document my process in a bit more detail here.

I start by consulting my Ops Session Checklist which lists all the steps required:

The first step is to grab a bunch of blank switchlists and go to each town to record the cars, their location, and where they're headed. Since the New Haven was basically a large terminal railroad, most of the cars going out are empties. 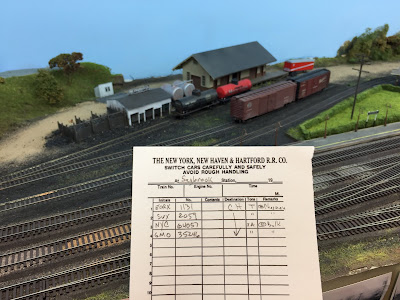 Here we are in Saybrook where we record 4 cars - 2 tanks & 2 boxcars - all headed back west to Cedar Hill yard in New Haven. 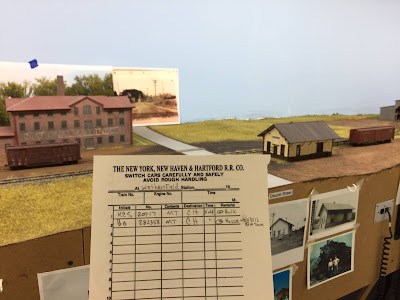 Another example: Wethersfield, where there's a car on the bulk track, in front of Gra-Rock and a boxcar at the house track. Both of these cars are also bound for Cedar Hill yard, but since Wethersfield is served only by the Valley Local (HDX-7) and it doesn't go to Cedar Hill, these cars will have to be transferred to HDX-12 (the Airline Local) in Middletown for further forwarding. They're headed ultimately to Oak Point and off the property to the PRR. 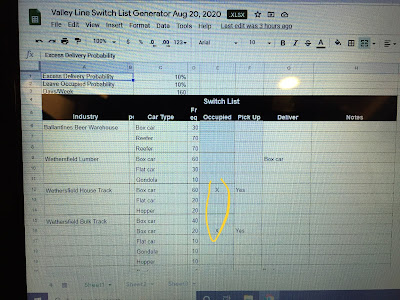 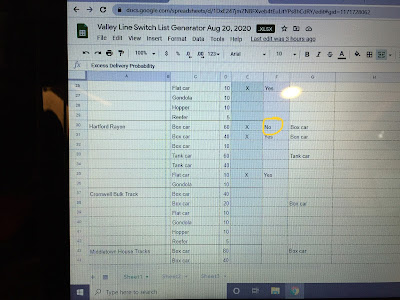 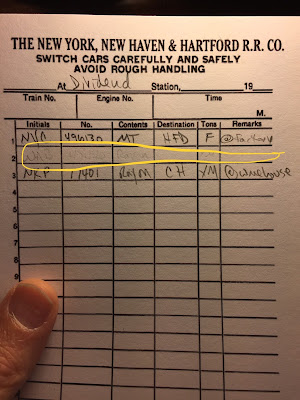 I then just go back and erase those cars from the switchlists. 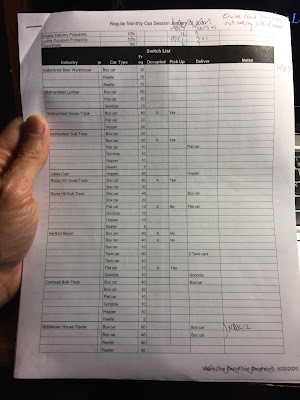 I build my four local freights with the cars in the "Deliver" column of the spreadsheet.


The cars to be delivered go into the trains that serve the towns the cars are going to. But there are exceptions. For example, based on what I know about my prototype's operations, I know that most of the traffic coming into Middletown comes via the Air Line Local (HDX-12). So you see noted above that two boxcars are destined for the Middletown house tracks via HDX-12. So even though HDX-7 serves Middletown, these cars being delivered will be placed in HDX-12's consist for delivery. 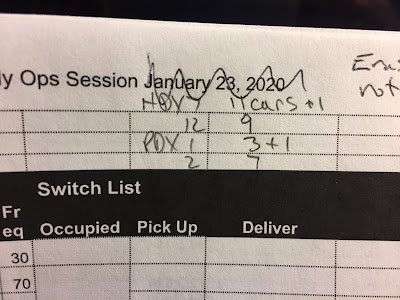 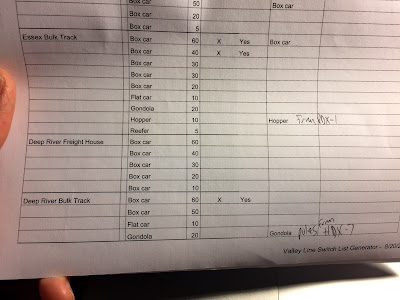 Like the Middletown example above, you see in this photo that the hopper of coal consigned to the Essex Bulk Track is coming via PDX-1. Coal tends to come from the south (so through Cedar Hill yard) and not from the east (Fort Yard/New London) nor the north (Hartford Yard). So the best routing for coal to Essex is for PDX-1 to bring it from Cedar Hill and transfer it to PDX-2 at Old Saybrook. I also have a load of utility poles going to Deep River, but they're coming from the north - through Hartford Yard and down the Valley on HDX-7 to East Haddam, where they'll be transferred to PDX-2 for their final delivery.

Fun, eh? Actually, using your prototype research to imagine all this traffic is pretty fun. And we haven't even started the ops session yet! 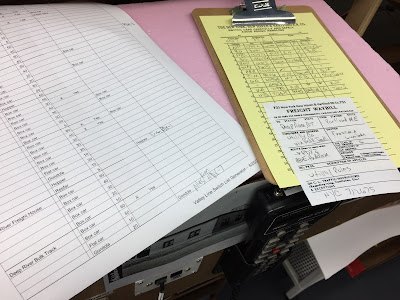 Here are the component parts of HDX-7's paperwork to illustrate further. On the left, you see the note about the poles. On the right you see HDX-7's wheel report, which is a listing of all the cars in its train to be delivered (gleaned from the spreadsheet), blocked according to town. The last entry is the last car in the train - a gondola load of poles. Also, since this car will be left for a subsequent local freight for delivery to the final destination, I've completed a waybill that will be left with the car in East Haddam. The waybill replaces the old (and unprototypical) "Car Transfer Form" I'd been using to accomplish the same purpose (providing paperwork to go with the car which instructs the subsequent local what to do with the car). 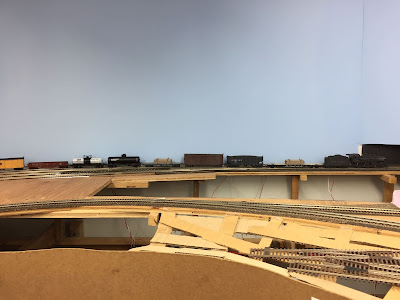 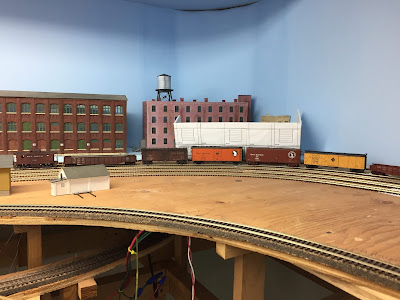 plus the gondola makes a total of 12 cars in its train.

Then just "rinse & repeat" for the other locals: 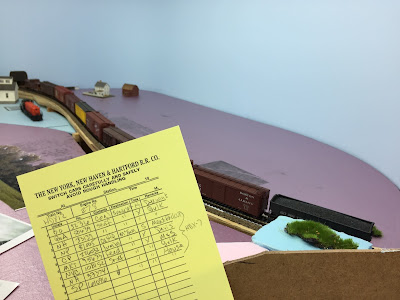 Here's the Airline Local (HDX-12) staged with 9 cars from Cedar Hill yard for delivery - a whopping 6 of which will be transferred to HDX-7 in Middltown. Per the prototype, the Airline local just drops and picks up cars in Middletown and the Valley Local does all the switching. I didn't bother writing up waybills for the 6 transfer cars since HDX-12 will be able to just leave this list with the cars. 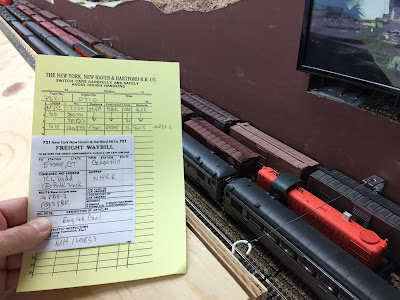 Here's PDX-1 staged at "Cedar Hill" staging, track 2. There are only 4 cars on its wheel report, including that hopper of coal for PDX-2 to deliver to Essex (and its associated waybill). The remaining cars in the train are ostensibly destined for Fort Yard having been picked up from towns between New Haven and New London. 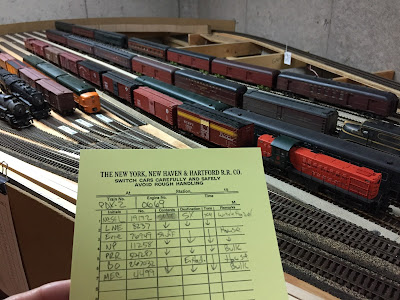 Finally, here's PDX-2 staged in Fort Yard/New London. Seven cars, all being delivered to towns it serves, so no transfers (or waybills).

So there you have it! I'm all set up for another session (actually, if you paid attention to the Ops Session Checklist above, you'll note that I also had to stage 7 Shore Line trains, but those are easy and outside the scope of this post). Writing it all down, my process may seem more complicated and time-consuming than it is.

Or maybe I just enjoy playing the role of freight agent - drinking my coffee and listening to big band music as I imagine all the different freight traffic coming into, and leaving, the Connecticut River Valley during the late 1940s.

It's that type of immersion that really starts to transport you to a different time and place and is where prototype modeling shines the most. Ops session setup - especially what I go through - may be a bit overboard but it's enjoyable in its way. And it literally sets the stage for my favorite part of the hobby - actually operating all these local freights and doing the "retail railroading" that was an everyday part of the Mighty New Haven.
Posted by Chris Adams at 12:01 AM