I held pretty-regular monthly operating sessions most of last year and right up through January of this year. And I just realized that with everything going on these past 5 months, I never did a post/debrief on the January ops session which is too bad since it included two women plus my next door neighbor (and former Saybrook tower operator - you'll want to click here for that story if you don't know it already). I even got to join in on the fun, operating the west end of the Shoreline. I'd planned on a post, but other things diverted my attention. Life and Work happened and - bing bang boom - here it is toward the end of June.

But work has settled down, my dad is doing really well, and the Missus' dad is holding steady. So, with the half-year mark highballing up the track, I thought it high time I host another ops session.

It's been a long time since the layout's operated - although some trains did run during the NERPM open house - so this next session will be a "shakedown" session. Nothing formal (e.g. no crew email), it'll be limited to core/regular operators only (those that know the layout best), and we'll likely stop the clock frequently to identify and fix problems as they pop up (or maybe not have the clock on at all). This session will be all about just putting the layout through its paces and creating a punch list of items to be sure and fix before "formal" sessions start next month. 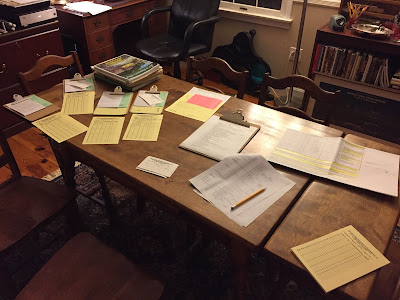 But the first step, as with any operating session, begins with a "pre-ops ops session." So that's what I started tonight:

There's still a lot to do:
If there's any interest, I don't mind actually posting the "Ops Session Checklist" document I created to keep track of it all. I've found that list super helpful in not only remembering what all needs to be done, but since I don't have to waste time wondering, I can motor down the list fairly quickly.

Heh - but it still takes about 3 hours or so to set up. About as long as the session itself. Sometimes longer. But it's all worthwhile not only to see the layout come alive, but to have another excuse to get together and spend some time with some great folks who share a similar passion and appreciate the fun escape as much as I do.