By way of a quick update since my last post, lots of nothing happened last week - other than a major storm, five days of power outage, no internet, and little modeling to report. I even missed posting a Wordless Wednesday for the week - and I don't think I've ever missed one of those during the almost 7 years of this 'ere blog.

Ah well. That's life. Fortunately, we have a generator that kept the fridge cold, the food saved, and the lights on. But it couldn't generate much motivation for modeling. I did get pretty good at timing the fueling, changing the oil, and (at least attempting) trying my hand at getting two chainsaws refurbished and started. Thankfully, the trees that came down on both sides of our house actually missed the house - but not the wires. And between the utility company and the town, they all got cleaned up. Good thing - the chainsaws are now at the repair shop.

I did however gin up enough enthusiasm to try some more weathering on the house I plan to put behind the tracks at Dividend, as well as on an outhouse and a doghouse. To wit: 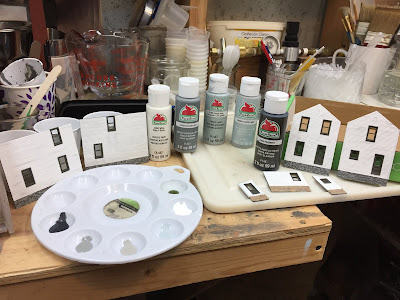 The walls of the house had been spray painted white, but in the last post I described how the alcohol/ink foundation weathering had seeped under the masking tape. So, though I covered those  mistakes with some more white paint, I decided to go ahead and brush paint white over the entire walls to give them an "uneven" effect. Then I drybrushed a variety of different grays to represent peeling/worn paint. 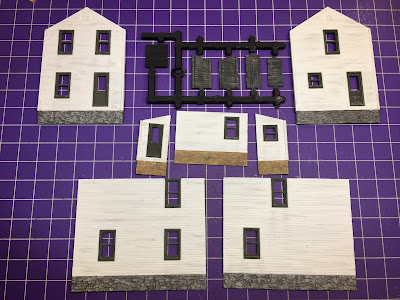 Click on the image for a closer view and let me know what you think. While I was at it, I also decided to use a similar technique (though this time I also added some raw and burnt sienna) on the outhouse. I think the house came out ok - but the outhouse? Meh - not really sure. 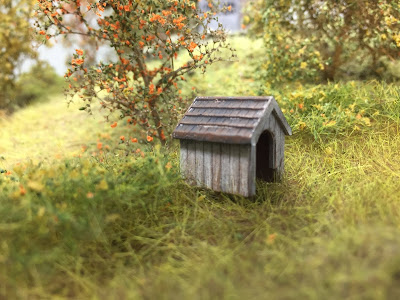 After a farmhouse and an outhouse, I decided to build & weather a dog house. I again used the same dry brushing technique, but I really think I'd do well to remember to use a hair dryer and dry each color thoroughly before drybrushing on the next color. Failing to do so tends to allow the different colors to actually blend together rather than being distinct as they should be. I think I got away with it though. The dog house came out halfway decent (though, admittedly, I need to be sure and "plant" it - it's just sitting on, rather than in, the grass for now).

Not much progress for a whole week - but given the circumstances, I'll take any progress as a success. Hope the coming week is more productive and I have more to report soon.

At least I hope to post a Wordless Wednesday this week!

Hope you and yours are doing well despite storms, pandemics, and heat waves. I can attest to the fact that the basement is a great place to be this time of year - whether to work on your layout or to wait out a hurricane - and it's the coolest place in the house!
Posted by Chris Adams at 6:25 PM