The Annual Reunion for the New Haven Railroad Historical & Technical Association was moved up again this year and as has been my habit the past couple of years, I opened up the Valley Line to give folks visiting from out-of-town the chance to operate.

This time around there were a few changes/innovations from the most-recent ops session, which occurred just a little over a week previous. I was going to try one-man crews, but it turned out I had enough of a response that that only worked for one local. Even the Shoreline trains were fully staffed thanks to Tom - and good thing: turns out there was no way BillS would have been able to make it back & forth between "Points West" and "Points East" in time.

In order to cut down on the work the "desk jockey" has to do, I offloaded the Agent/Operator duty to a new "Train Register" located at each station. Now crews, instead of physically walking over to the desk to report their # of cars and get their work in town, they sign the register, note their cars, and take the switchlist and/or orders that are clipped to it for them.

Currently, all that is on a small clipboard hanging from a cup hook in each town. I thought I'd be able to get away with that long-term, but operating a bit myself afterwards I concluded that I really need to install bill boxes asap. Now, "all" the guy at the desk has to do is operate the mainline switches as the Saybrook Towerman. With all the traffic through Saybrook, that'll be enough to keep him busy!

Secondly, it's been difficult in past sessions for the crews to keep track of the cars they have to hand off to each other. Since I don't have car cards or waybills, I needed a better alternative to just expecting they'd transcribe the info from their switchlist to another (for the receiving crew). So - at least for now - I've created a "Car Transfer Form": 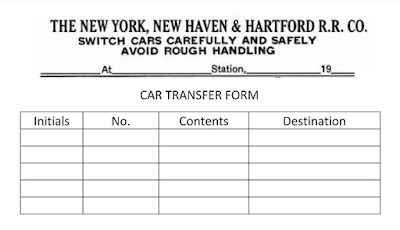 Crews can use this form to keep track of the cars they know they need to hand off and either give it directly to the crew receiving the cars, or leave it for that crew to pick up later (on the clipboard or in the eventual bill box) if they're not in town at the same time. It's admittedly a bit contrived/non-prototypical, but it serves as a plausible stand-in until I can get around to doing waybills.

The final idea was to stagger the start times of the locals. Last session, it got a bit crowded in Saybrook with two locals in town at the same time, not to mention all the Shoreline trains going through. While that's perfectly in keeping with the prototype, it makes things a bit, um, "snug" in that area. Thankfully, it's also in keeping with the prototype to have the locals arrive in Saybrook at different times - which, in turn, means staggered starts.

But I've been hesitant to institute this innovation since it would require some folks to hang around waiting for their work to actually begin. But it turned out, since some of the guys were on the Reunion Dinner Train and arrived later in the evening anyway, we got to try it. It worked a bit to reduce congestion - but not as well as one-man crews will, I suspect.

So with all that as prologue, on to the session!


It was another really fun night with lots of laughter and a bit less stress than last time, due entirely to having the crews deal with each town agent via clipboard rather than in person. So I was able to enjoy the session a bit more - and even got to take these photos! As for the "laughter" part - well, I'll leave it to BillS to post his video of the Boston-bound Yankee Clipper. Let's just say, it didn't go quite as planned . . .

We had the usual minor glitches that every session seems to have - the occasional short (which, thankfully, was typically caused by human error and didn't shut down the layout), some confusion over the paperwork (I - admittedly - tend to have more of it than average), and some mechanical issues (mostly "prototypical" in nature - broken couplers, wonky engine operation, a derailment). But all in all - and at the risk of jinxing it - the layout is operating really well.

So, with all that in mind, here's my punch list/goals for next time:


I'll be hosting a guest ops session during the NER convention in November, so I'm hoping to get a LOT more operations under my belt between now and then. In the meantime, and as always, please feel free to weigh in with feedback/tips/suggestions!
Posted by Chris Adams at 8:21 PM