Yes, this here ol' blog is starting to ramp back up a bit. Counting yesterday's Wordless Wednesday (which I don't think I've ever missed, no matter how busy I've been), this will be the third post this week! So that's something to be thankful for - for me, anyway. Means I'm able to get back down to the basement. 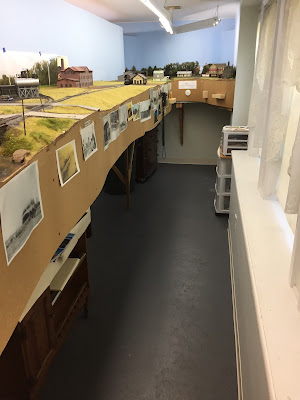 Compare this to yesterday's view and you'll see that I did, in fact, get down to the basement - if only to clean it up for a "Virtual Layout Tour" last night. Thankfully, after a months-long hiatus (including some scenery work), the layout fired up fine (no shorts!) and ran fine as well.

One definite effect COVID has had: we've all gotten VERY creative about how we get "together" for such things. It wasn't that long ago when an online, real-time layout tour would have been the stuff of sci-fi dreams. And now, thanks to the necessity of the current situation, it's become pretty common. 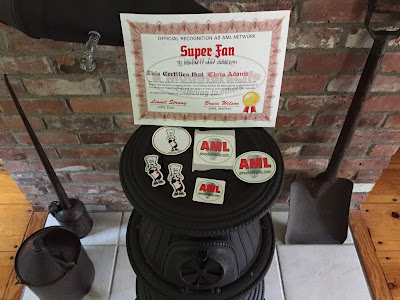 Another thing to be thankful for is a great virtual - which often evolves into in-person - model railroad community. Probably the largest one I'm part of is the AML group. I've mentioned "A Modeler's Life" podcast many times before, and sometimes they mention me too - yesterday "officially." I got the above certificate and swag in the mail just in time to share it with the folks on the AML's Patreon chat last night. 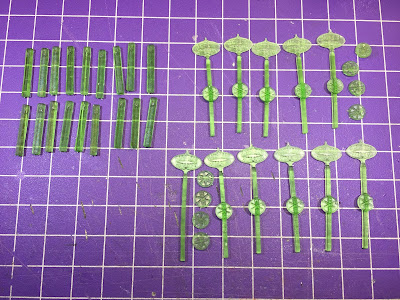 And thanks to my buddy ChrisZ, I finally got around to opening the latest package that he dropped off waaaaaay back on May 25 (right before I got distracted by house & car projects). Looks like I have more whistle posts to paint. And, yup!, those are the latest iteration of the "old time" RR crossing signs that aren't available anywhere else but here. These have the round sign included on the pole too - with and without reflectors(!) Frankly, on first look, I can even see the reflectors (I think on the prototype they're only 1/2" in diameter!), so he may not bother with them on future castings, but I'll hold my verdict until I paint them.

So LOTS to be thankful for lately!!

But now, some food for thought. I won't ever be thankful for COVID, but one consolation noted above is that it's really amped up everyone's creativity. From having more time for our hobbies to figuring out new ways to share our progress and get "together" (including virtual conventions and layout tours).

What about operating sessions though?? How are the larger layouts that require multiple operators going to fare in this COVID world? There had already been a trend toward smaller, more portable layouts, driven primarily by increased levels of detail, more attention to realistic operations, and increasing mobility of our society.

Now, on the one hand, it looks like that trend is an even smarter way to go in the future - building something you can manage either alone or with one other person (or two at most). Less chance of exposure that way. On the other hand, I suspect our society may get a lot less mobile as folks do more staying-at-home, "staycations" and such. They may even buy larger houses since they'll be spending more time there (and maybe even working there full time through telecommuting as well). But will larger houses translate to larger layouts - and more operators?

One thing that seems certain, at least for the short term: large operating sessions are on hiatus. Do you think they'll come back? Or is this the start of a "new normal" in model railroading?

The recent explosion of virtual meeting technology and experience has demonstrated that a modeler doesn't have to ever be a "lone wolf" if they don't want to be - no matter where in the world they live and no matter how much this or any other pandemic prevents us from getting together in person. A guy named Dave Abeles has even figured out a way to do remote, virtual operating sessions where his crew gathers online, from their own homes, to operate his large home layout - and he's the only one actually in the basement (you'll definitely want to check out his blog about it here).

Will that become the new normal?

At the other end of the spectrum, I know of another layout owner that's restarting his large ops sessions next month. I won't be able to attend (I'm rarely able to get there under even normal circumstances), but I'll be watching his progress and precautions with great interest. The reality is that many of our fellow hobbyists are part of the vulnerable population (including yours truly, thanks to Crohn's), and as much as we crave getting back to normal, we want to be sure to do so responsibly.

I guess what a lot of this boils down to for me is that, if I'd had a crystal ball during the winter of 2015, would I have decided to triple the size of the layout? At the time, I figured "expand the layout, increase the operators, maximize the fun" and that's proved true over the many operating sessions I've had since. But if I'd known that 5 years later it could possibly be dangerous to have large groups of vulnerable people together in a closed basement, I may very well have decided differently.

Heh - crystal balls are way overrated. Usually it's best not to know the future and just live your life.

But give some thought to what that means for the future of model railroad ops sessions - especially those at large layouts. And if you have some thoughts/recommendations/musings to share, I hope you will. I think we'll all benefit from hearing other perspectives.

So are socially-distanced ops sessions (or no big ops sessions at all) going to be the new normal or is this just a blip in the grand scheme of things? Weigh in below!