One of the pleasures of this hobby is collecting, and of all the things we can collect - whether locomotives, cars, kits, or whatever - my favorite, by far, is books. I've spent almost 40 years collecting railroad books, with a special focus (not surprisingly) on New England railroad subjects. And I don't mind admitting that I probably have every book related to the New Haven Railroad.

At least I thought I did.

But a couple of weeks ago, my buddy Randy started texting me about a particular book he got and how much great information it had on freight traffic to & from the New Haven through its Maybrook Gateway. Smugly, I mentioned that I probably had it already and went over to my bookcase to retrieve it.

Heh - suffice it to say, the Maybrook book I had was not the book Randy was so excited about and when I saw the cover, I realized that this was one of those rare New Haven books that somehow got past me. 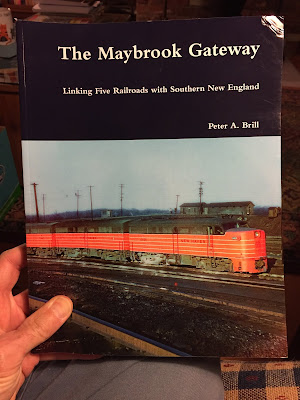 Thanks to the wonders of the internet (and to the chagrin of many second-hand book dealers, I'm afraid), I was able to find a copy of this book in less than 10 minutes online (and I've since learned that it's actually still available as a print-on-demand). I vaguely remembered coming across this book at one of the train show some years ago, but wasn't super impressed with the number of photos, so figured I'd pick it up "sometime."

Turns out the photos are really not the point of this book (though it turns out they're just fine - and include many that have never been published before) - it is an absolutely fascinating read and tells you everything you need to know about how freight traffic was diverted from the congestion and car floats of NYC and funneled through Maybrook, NY and across the famed Poughkeepsie Bridge into Southern New England.

I suppose it's technically a "New Haven RR" book since Maybrook yard was really a NHRR yard - and the Maybrook Line across the bridge and into New England was definitely New Haven. But the author goes into a lot of detail about all the railroads that connected to the New Haven at Maybrook, and tells the story of how the traffic developed and moved through this all-important, and sadly long-gone, gateway.

The book opens with a lament, heard all too often among politicians and transportation advocates these days that "it would be so nice if there was a way to get rail freight across the Hudson and into southern New England without having to go all the way up to Albany or having to enlarge the tunnels under Manhattan." Well, such a route actually used to exist and "The Maybrook Gateway" by Peter Brill tells the fascinating story of its rise and unfortunate fall.