Typically, "Throwback Thursdays" tell you about something that happened a long time ago. Well, this one is more in the way of making up for not having posted something in the past - namely, a report on my January, 2018 ops session.

Which is really too bad, because in a lot of ways it was a banner session:

I took advantage of the new year to start a new "week" of sessions. Even though I can run 3 different eras/years (1947/1948/1949 - each with different motive power) I've been focusing my era lately on October, 1948 for the best mix of steam (still have moguls and mikes) and diesel (PAs were delivered in September, 1948 & I can use my RS-1 and RS-2). During this era, the Valley Local operated on a Monday through Saturday schedule, going to East Berlin on M/W/F and to East Haddam T/Th/Sa.

So, I figured I'd start the 2018 operations year on the first Monday in October, 1948 and, according to my handy prototype (and original) calendar, that would be October 4. 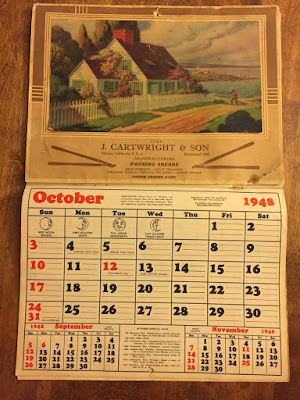 Unfortunately, as is too-often the case with ops sessions, I didn't get to take as many photos as I would have liked. Fortunately, other attendees were able to fill in some gaps.

Ah, a late, Indian Summer afternoon in October, 1948, sitting down by the station, watching the parade of trains going by. Could there be anything sweeter?

That feeling is what I'm trying to capture on this layout. Sure, I need to do a LOT more scenery and build/install a lot more structures in order to complete the illusion. But, thanks to Mike, Mel, Mike, Bill, James, Bill, and Kaylee, operating the trains, the layout comes to life for a few hours every month (or so) and, with the use of a little imagination, we can all enjoy a nice trip back in time.