When I was bike racing, my summers took on a particular, familiar rhythm of training and traveling and my modeling was very seasonal - mostly autumn, and a bit through winter (when I wasn't on the trainer). But since we're no longer spending summer weekends at races, and Connecticut's economic tough times continue to take a toll, we're doing a lot more "staycationing" these days. And the happy benefit of that is more time working on the layout.

So this past weekend - aided and abetted by September-like weather - I made some more progress in East Berlin. But first, there was a little regress . . . 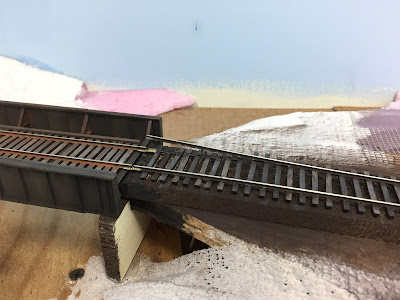 This is what happens when you get a little too, um, aggressive in trying to get rail heights to match. As you can (maybe) see, I have transition joiners here (Code 83 on the bridge, Code 70 main) and the code 70 was still just a little too low. So out came the pliers to pull up the rail "just a little bit" and SNAP! went the side of the joiner and up came the rail. ARGH!!

Of course this is the track that already has feeders soldered to it, is already nicely painted and weathered, etc. So I really didn't want to replace it. So, uncharacteristically, I didn't obsess about it too much and got out some spikes and did a little "handlaying"/spiking.... 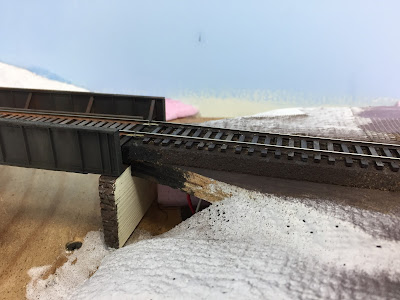 Literally 20 minutes later (no, I didn't time it - but I did compare the timestamps on both pics!), it's all fixed and working fine. And that little bump is gone >:^) 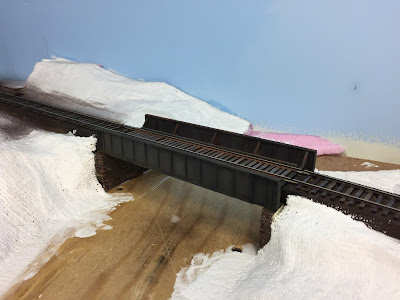 Once that bit of surgery was done, it was time to get out the surgical cloth and fill in around the abutments. Ground goop will be the next step here.

But not being quite ready to tackle that (and the riverbed, which I've never done before), I turned my attention to the end-of-track area - where the brickyard will be. Including a brickyard at this location is an admitted exercise of modeler's license. While there were brickyards along the Berlin branch, there were none at the end of track, but I had no other place to put one and want to be sure and have this important local industry represented. 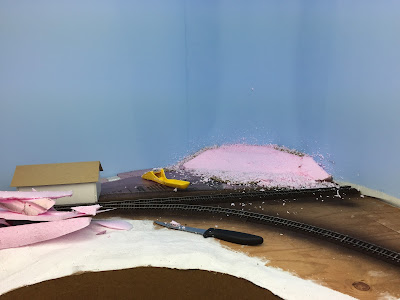 Problem was that the foam "hill" I'd put in the corner (primarily to cover a huge gap between the backdrop and the layout base) wouldn't allow enough room for even a tiny representation of a brickyard. So I started whittling it down . . . 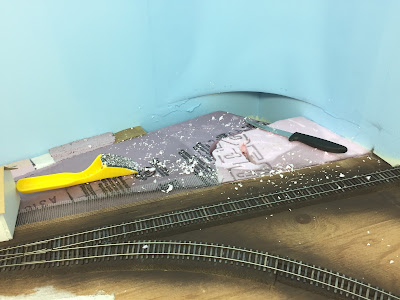 But ultimately, I decided to remove it altogether and deal with the gap another way (maybe cover it with a brick wall/flat?)

With the new clean(er) slate, it was easier to re-imagine the area. I know nothing at all about brickyards, but I hear that the kilns typically used in New England are much different than what's used out in the midwest. Unfortunately, there's not much online picture-wise to help either.

But as luck would have it, the mailman had just delivered Tony Koester's "Space Saving Industries for Your Layout" and there's just a little bit in there about the brick industry (his dad worked at a brickyard in Indiana). Turns out, all I really need is a place to dump coal (to fire the kilns) and a place to load boxcars. If I can come up with a reasonable facsimile of a kiln, stack and office I'll be in (the brick) business!

I decided to tackle the track problem first though, by adding a coal dump . . .

Again, I didn't want to remove track which is already painted/weathered - and it turns out that there's a support riser right under this spot (really?! what were the chances...) So I just took out my xacto, trimmed away the cork and voila! instant drop pit - sort of.

Next, I wanted to see how this track would accommodate the cars the industry would need. On the prototype, this track was the mainline that at one time continued to the Kensington section of Berlin, CT and connected with the Hartford-Springfield line. But by the late 1940s, the main had been cut back to East Berlin - just "off scene" to the right - and AFAIK was used for car storage, primarily for Stanley Chemical (the reason the line continued this far). I figured this historical fact would allow a plausible use of this track to serve the brickyard. 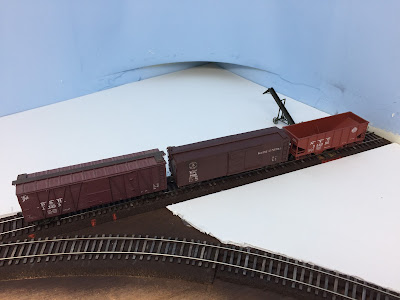 Maximum track capacity here is 3 - 40' cars, plenty for a small brickyard, and probably more than the typical traffic (1-2 cars at most). Here, I spotted the hopper over the pit to confirm that the cars wouldn't foul the adjacent siding for Stan-Chem. 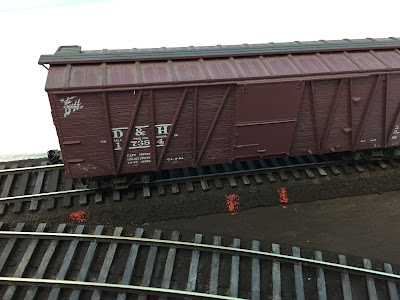 The red marks show the fouling point as well as the loading door area - marks which will be helpful in determining road and loading dock locations later.

Now I'm in the process of mocking up different structure ideas - with the caveat that I really don't have much of an idea of what should be here. The fun part (and I mean that sincerely) is that since this area is mostly freelanced, I can do pretty much anything that's plausible. And I might even be able to use stuff that I have on-hand. 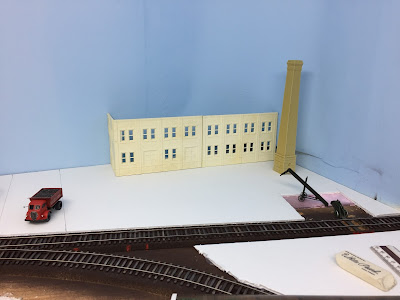 For example, I have this really cool stack that I got from Sylvan models years ago, and precious little chance to use it on a sleepy branchline. But here I think it'll work perfectly to exhaust smoke from the kiln. And you can see the enlarged pit area there on the right. 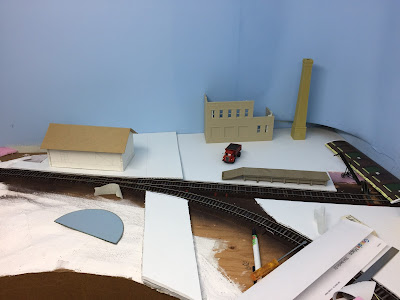 I'm still trying to figure out just the right type of structures though. The station on the left is pretty well set (and in keeping with the prototype, it'll be heavily weather-beaten/abandoned), and I'm liking that building with the two rooflines better than what I had in the previous photo. Over on the right (unfortunately fallen down) is a printout of a one-story brick building that is a stand-in for a kiln. Haven't decided how best to approach the kiln though.

But the loading dock pretty much has to go where I have it mocked up. The final model will be a concrete dock with the ramp going toward the back (into the yard).

And - after a LOT of vacillating (I know, shocker) - I finally finalized the street location. I had tried it at a perfect 90 degrees to the track, but that would have caused it to hit the back wall at an angle and would have reduced the area available for the brickyard. I also considered curving the road to the left behind the station - but that'd be unprototypical (I know, I've already breached that rule here, but I'm trying to be good!) and it'd still hit the wall at an angle. I finally opted for a straight road (per prototype) that hits the back wall perpendicularly. I think that'll be at least a little easier to blend than an angle.

So that's the state of East Berlin at the moment. I hope you'll weigh in with your thoughts, comments, and feedback. I'm pretty new to this stage of layout construction (heh - I have PLENTY of experience up through trackwork, but that's it!), so I'd really appreciate the benefit of your experience!
Posted by Chris Adams at 1:36 PM