As you can probably tell from my recent posts, I enjoy building benchwork. It's great to get down in the basement with my saws & drills and have some nice tangible progress to show for the time I spend. Ironically, if I do it right, it'll eventually "disappear," doing its job of supporting the layout unobtrusively and without any fuss.

The L-girder benchwork system I use makes the process much simpler and leaves a lot of room for adjustment along the way - and in the future too, if necessary. I'm no carpenter and I'm not building cabinetry, so this system is perfectly adequate for my purposes. But there *are* a few engineering-type standards you'll want to keep in mind while you're building. Fortunately, more experienced folks than I have come up with a handy-dandy reference: 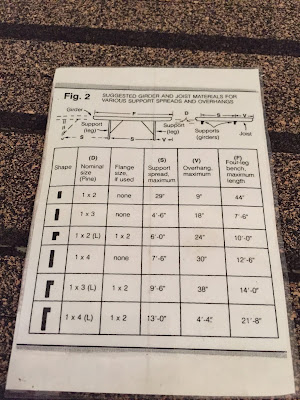 I copied this from "Basic Model Railroad Benchwork" (2002 ed) and laminated it with clear packing tape. I use it that often. It gives you a nice, quick reference to all the dimensions you'll need to keep in mind - maximum spreads & overhangs, sagging minimums, etc. I don't have it memorized yet, but until I do I keep it handy in my shirt pocket. So once I got some more of the right lumber (still can't believe I ran out), I could finish building the L-girders, splice them together, and start building the legs.

The maximum L-girder length (at least the maximum you'll want to handle) is 8', corresponding to the typical length of lumber. But your benchwork probably has sections far exceeding that length. In my case, my peninsula is just over 14' long., so I needed to splice L-girders together. 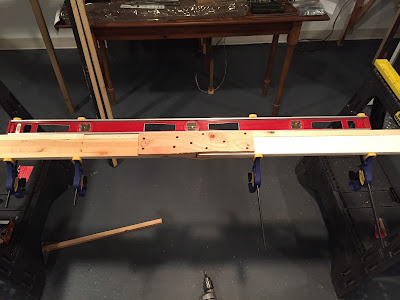 Here's how I do it: I clamp a 4' level - 2 clamps on each side of the joint - to insure that the girders are straight with each other. Then I screw a plywood splice on the back (non-flange) side. The recommended minimum length of the splice is 4x the width of the web. In my case, the web is a 1x3 so my splice is 12" long. Once that's done, I splice the other/flange side with thinner plywood or masonite. Anything thicker will prevent you from inserting screws through the bottom of the flange and into your joists. 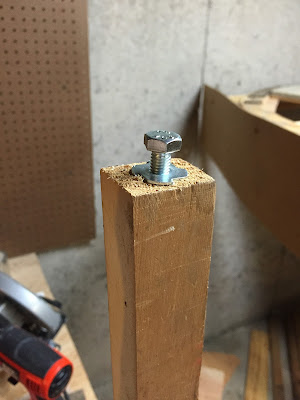 Next, I turned my attention to the legs. One of the things I always thought was overkill was using these T-nut adjusters, but I quickly changed my mind once I realized how easy height adjustments can be (no shims, and they allow the legs to go down without cutting!). They also keep the bottom of the leg from wicking up any moisture from the floor. They're cheap and easy to install - just make sure you drill the hole deep enough to accommodate whatever length of bolt you're using. 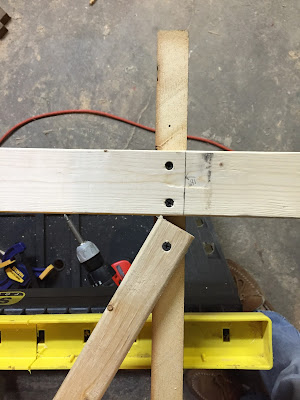 I thought I'd taken a picture of how I clamp/jig up the legs, but the process is pretty straightforward. You want the legs to be parallel with each other and at a perfect right angle to the crosspiece. That crosspiece will double as a joist later. I use a carpenters square clamped to the leg to help me set the joist at the right angle, then clamp the joist to the leg for screwing in. Repeat for the other side.

How far apart should the legs be? There are a few variables to keep in mind, but I think the most important is the "maximum overhang" measurement of the joists you're using. Referring to my handy card, I see that 1x3 joists can overhang a maximum of 18" and the maximum distance between the legs is the "support spread maximum" - 4'6". So, putting legs anywhere on that joist no farther apart than 4 1/2 feet and no further away from the end of the joist than 18" will be fine. So LOTS of latitude here.

In my case, I decided to put legs right in the middle of the widest part of the benchwork - the turnback loop at the end of the peninsula. The curve's radius there is 24" (remember, it's a freight-only branchline) so a 5' joist would support the loop and provide about 6" of scenery on the outside of the track (though I'll probably cut that back at some point to make my aisle wider. See? VERY adjustable).  5' joist - measure 18" in from each end - puts the legs at 2' apart. Just fine.

Once the crosspiece/joist is attached to the legs, I use 1x2s for the crossbraces. 4' long gives me two braces from a piece of lumber. Just remember to prevent the braces from interfering with where the L-girder will go. I forgot in the photo above - I'll have to cut off that little corner that goes past the leg. 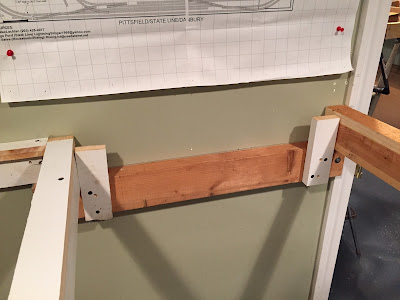 Making legs for the other end of the peninsula L-girders was easy. There aren't any. Instead, I just used scrap 1x3s to attach them to the 2x4 I'd installed on the wall earlier. 1x2s would do just as well, but even scrap 1x2s can be useful as risers for your subroadbed, so it's best to save them for later. 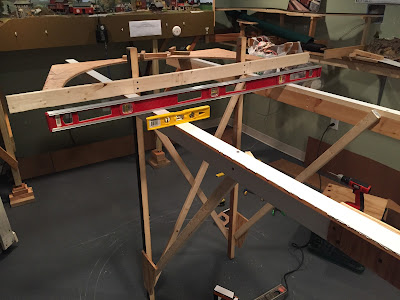 And here it is all together: 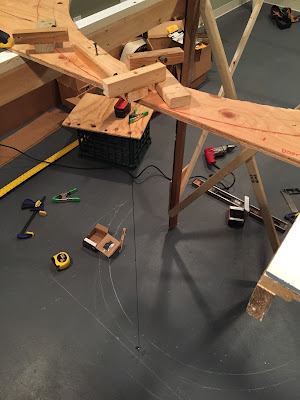 Here's a closer view of the giant plywood turnback loop template, with the plumb bob showing it's placed perfectly. Incidentally, the excess overhang of the L-girders will definitely be cut back to provide more aisle space here. 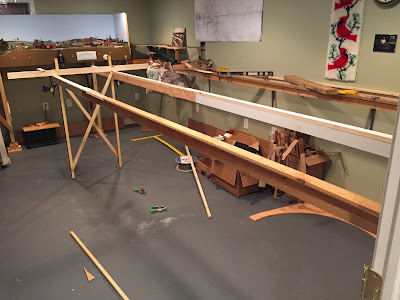 Overview of where things presently stand, literally. This view is as you come into the room - Essex will be in the foreground & Deep River will be on the other side (there'll be a backdrop down the center). 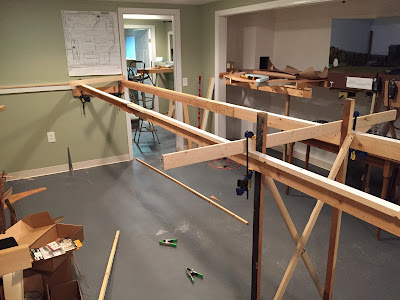 And this is looking back toward the door - an admittedly rare view, though you can clearly see the Shoreline turnback loop benchwork in the far background, and the Somerset module to the right of that.

So that's where things currently stand. Considering how easy this benchwork is to build, I'm a little surprised that I'm not further along. But I have to remind myself that I'm only spending a couple hours at a time on it (I could probably do it all in the course of a FULL 2-day weekend, but who has those anymore?), and there is a fair amount of thinking/planning that you have to do before cutting lumber and screwing it together. If "measure twice, cut once" is good advice, I'll add "think it through, THEN measure twice, cut once."

Thankfully, there's only one minimally complicated area to address in this room (I'm not counting the liftout between the Saybrook wye and the wall), and then I can make with the joists. That process goes VERY quickly and will not only show you just how it's all going to look in the room, but will give me a base to start actual track planning!
Posted by Chris Adams at 12:30 AM