Now that the drop-down across the doorway is finished, it's time to lay track. I already laid the cork roadbed along the "easemented" lines I'd created (click here for how I did it), and the smooth, long S curve looks great. But I think the track itself would really benefit from some superelevation - it'll be cool to see a long Air Line Local leaning both ways around the long S.

A quick search of my library led me to a trackwork book that had a section on superelevation. The author suggests using styrene strips of .010", .020", and .030" thick to gradually raise the outside rail, but the first step is to mark where the outside rail will be...


While the recommended practice is to have each strip be a standard car length long (12" for passenger cars, 6" for 40' freight cars), my curves weren't that long, so I fudged it a bit and used (much) shorter pieces. 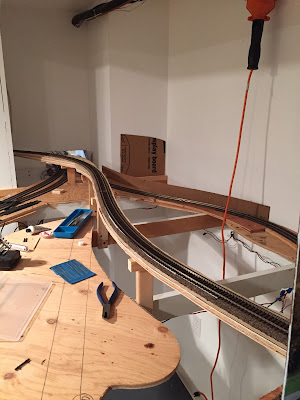 I don't think it'll end up mattering though - the elevated S curve came out great and works well. The only thing I'd change in the future is to go up to a .060" thickness. The .030" height doesn't make for as dramatic a lean as I'd hoped. On the other hand, considering how short these curves are, I wouldn't have been able to transition up to .060 quick enough without risking operational problems.

Tip: when you have a long curved section like this, you'll want to solder the track together first, even if it gets a little unwieldy. I tried to solder as I went along and found that to be even more difficult than handling one long piece of track. It might be different if you're working with a buddy, but working alone you just run out of hands. Add to that the fact that I wanted to glue the track down and things got really stressful for a bit, trying to do everything before the glue set up. As it was, I used track nails to hold things in place - most necessary when using Atlas flex (which is ultra bendy) rather than MicroEngineering (which you can bend to a curve ahead of time and have it hold). Another tip: if you're going to use track nails, pre-drill the holes and don't try to do that along with soldering and gluing. Save some stress!

After the S curve was done, all that remained was the simple matter of continuing the track across the drop-down bridge...


I hate to give Randy the satisfaction, but after a lot of hemming and hawing I finally decided to take his advice and extend this track all the way to the corner of the room, behind the backdrop that's already there (of course, that required some deconstruction). I was worried about access, but discovered that I could still reach the end of the track from underneath. It's not easy access, but it's doable and considering how tight things are, it's unlikely that anything will derail back there. But I may put a rerailer there just in case. AND that little extension gives me another 40" of tracklength - enough to allow the entire Air Line Local to be staged without being on the drop-down bridge at the start of the session. So I think the destruction deconstruction change will end up being worthwhile.

Now I just need to figure out how best to wire all this. I'm considering attaching the wiring bus to magnets so that when the bridge is in place and the magnets connect so does the power. BONUS: when the bridge is down, there'll be no power to the tail track. At least that's my thinking at this point - but I welcome suggestions, as always!
Posted by Chris Adams at 12:30 AM