(I've received some positive feedback lately on my "Wordless Wednesday" explanations, and I'll continue to do those in the weeks ahead. But this week, we'll change tack totally and have a decidedly un-wordless Wednesday...)

While the initial reason for building this layout was to replicate the operations of the New Haven Railroad's "Valley Local" along the Connecticut River (informed heavily by the memories of one John Wallace), I'd always intended for the layout to try and represent railroad operations in the CT Valley generally along the entire line from Hartford to Old Saybrook.

But as my research continues to enrich my understanding of how the railroad operated in this area, my focus has - um - "evolved." There was evidence of this evolution from the earliest days of the layout - e.g. I'd always planned to have the Air Line come in to Middletown, just as it does in Wallace's descriptions of the Valley Local. The Air Line plays an important - though only a bit - part in the Local's operation. And so it does on my layout as well.

Old Saybrook has evolved a bit, well, differently. I'd always intended to have the "Saybrook Scene" greet visitors as they come down the basement stairs.  Since I live in Old Saybrook, including the station area is especially appropriate - but only as a backdrop to the Valley Local. Heck, at first this scene wasn't even going to be operational.

By the time I broke ground for Old Saybrook though, I'd already decided "it'd be a good idea" to make the Saybrook Scene at least workable - again, only as a minor bit player - and have the south end Valley local (a.k.a. PDX-2, the Shoreline Local from New London) come from "somewhere." So I built some staging. 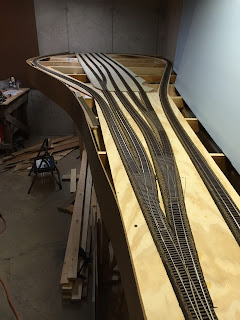 The Shoreline local would start here and head up the Valley Line. The other tracks would be for "generic Shoreline trains" that would run around a "generic" dogbone loop through the Saybrook Scene.

But then I did some more research and discovered that there were 71(!) trains through Saybrook in a typical day. And a funny thing happened: I started to actually care about those trains. The more I learned about them, the more I realized I wouldn't be content just having them being "generic" trains. I certainly couldn't represent all 71 of them, but I could at least have them come from the correct direction (eastbounds coming from the west and vice versa).

The final nails in the coffin of my complacency were my friends Randy and Tom who did a little impromptu ops session in Saybrook to see how the locals would interact. And while it was nice that the (mostly) prototype track layout in Saybrook operated (mostly) prototypically, "a few changes" were recommended. Worse, it became quickly apparent that the "generic" staging arrangement I had would have to be totally rethought and redone.

So, last Friday - when I thought I would push north to Essex, Randy and I instead ripped up most of the mainline in Old Saybrook and just-about-all of the "East End" (New London) staging.

The pictures tell (most of) the sad story... 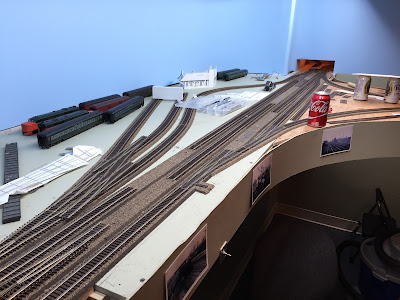 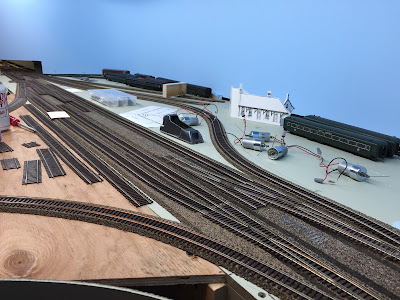 ProTip: If you're modeling a prototype railroad and want it to operate prototypically, do your best to have your track arrangement follow the prototype - even if you don't (yet) understand what all the tracks do. In my defense, I'd only intended for this area to be "generic" bit-player support for the rest of the layout. But now that I really want to operate it according to the prototype, my track arrangement has to follow suit.

In the case of Saybrook itself, we had to swap the two crossovers so their orientation would reverse and we had to add an additional crossover to allow eastbound trains to get to the proper tracks. That required almost all of the mainline track to be removed, reconfigured, and replaced. 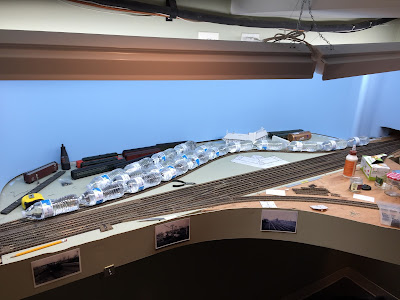 One consolation (other than the much-more-prototypical layout and operations): I finally got around to gluing down all the tracks behind the station (using my soon-to-be-patented weighting method). 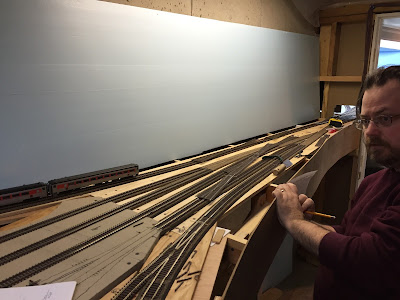 The staging yard is undergoing even more extensive surgery - the entire throat has to be reconfigured. Again, since it was just supposed to be "generic" staging "from the east," it just fed the westbound mainline tracks assuming the westbounds would become eastbounds as they went around the west loop of the dogbone and came back through the scene.

Now, the yard will be able to feed - and receive - from both east and west. And it will be a full and equal complement to the "west end" staging yard I just finished. 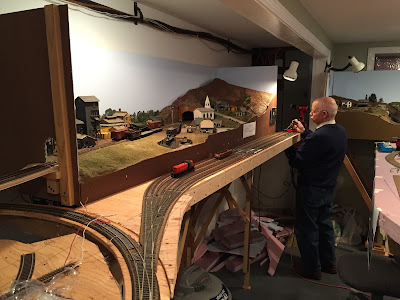 It really is finished - Pete came over Monday and wired it all up while I was working in Saybrook and (the other) staging and trying to repair all the damage that had been done on Friday get back to where I can operate again - this time, much more prototypically. 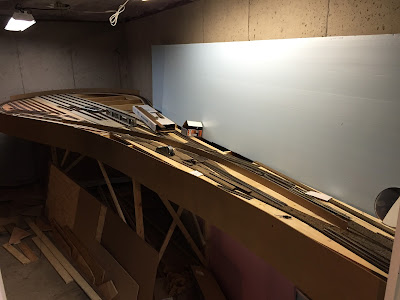 So this is the condition of the east end staging as of now. Still LOTS of work to be done. Suffice it to say that it won't be ready to operate by this Friday as I'd hoped. But, in the long run, it'll be worth it. And I only have to do this once, well, er, um, twice - right? 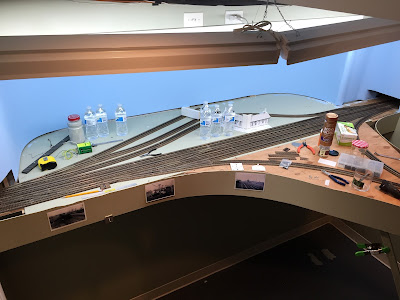 Saybrook is in much better shape. I finished redoing all of the trackwork Randy had started (a real pain considering all the precision required in locating turnouts and holes for turnout motor actuating rods), but I still need to rewire everything and reinstall turnout motors (Tortoise now, rather than MicroMark). And since I doubt all this (re)construction will have made it magically disappear, I still expect I'll have to address the shorting issue once everything's back together.

So, why take a perfectly good, large section of a layout and redo it? Well, if you're a prototype modeler you're not going to be completely happy if that section isn't as prototypical as possible - and operates as prototypically as possible. Besides, the real railroads change track arrangements all the time as business and needs evolve. So why shouldn't we?
Posted by Chris Adams at 9:00 AM