Ok, it's admittedly not quite that Zen. But almost. For Essex, I'm using the same process that I used for the rest of the layout. The benchwork is positioned and built according to where the aisles need to be and where the benchwork has to be to support the turnback curves. Click here for that process.

Once the benchwork is in place, I top it temporarily with masonite, cardboard, or whatever will support the large sheets of paper I draw on: 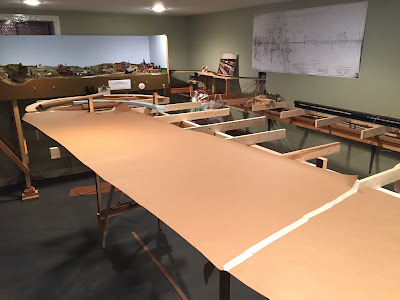 The above pic shows the paper in place and the pre-cut turnback curve plywood subroadbed positioned at the end of the peninsula. Now it's just a matter of connecting the end of that curve to the point where the track will go through the wall to Saybrook, drawing lines that represent track centers.

But how do I know where to locate the track? Typically, I'll use Sanborn maps to give me a good idea of the track layout. But even Sanborn maps aren't perfect, depending on your era and when the map was produced (click here for how I discovered that little tidbit). In the case of Essex, I have an additional resource - a scale map that Max drew up some years ago:

So, feeling fully prepared with reference maps, I was all ready to start drawing track centers with my Sharpie when I remembered all the track relocations I've had to do on earlier sections of the layout to accommodate structures. Sooooo...... my next step in "track planning" is going to be  . . . wait for it . . . Structure Mockups.

Yes, having an idea of what buildings you're going to want to include goes hand-in-hand with deciding what track to include given the space that you have to work with. And having at least a rough 3D version of those structures to plan around will also give you a much better visual sense of your space and how everything will look/work together. This step isn't that critical when you're talking about "hinterlands" like Rocky Hill (though even there I bumped out the fascia a bit to make more room for the station & freighthouse), but Essex has a lot of buildings - most of which are still around today - so it's critical to get it looking as "right" as possible.

So, before I do anything more in the basement, it's back to the workbench to build some buildings....
Posted by Chris Adams at 12:30 AM