Now that I've had some fun with stools and clamps, it's time to kick the benchwork into high gear. Not only do I have only 7 weeks left before my open house, all of my lumber is on the basement floor - and we were forecast to get a gullywhumper - and sometimes, when we get that much rain, I get some water in the basement. I needed to get that lumber off the floor and made into benchwork before it got wet(!)

But before you can build benchwork, you need to have at least some idea of what you need. And before you really know what you need, you need to plan your aisles. Trackplanning is very popular and for good reason - it's always great to dream. But once you have your dream plan, you need to get a good dose of reality. People have to run those trains and you have to have enough room for them.

So what follows is my process for figuring out aisles. Maybe you'll find a useful tip or two. 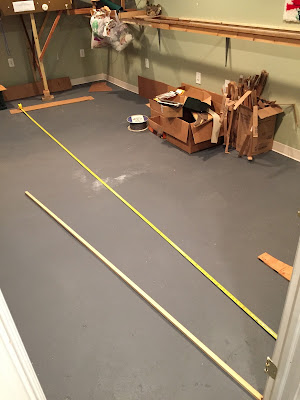 My first step, after having a rough idea of where I need the railroad to go, is to start mocking it up on the floor. This way you'll start seeing it in relation to what you already have in place, whether it's walls, or support posts, or - as in my case - preexisting sections of layout and benchwork.

You'll see in the pic above one of the existing modules (upper left corner) and the benchwork that will support East Haddam (upper right corner). The yellow tape is measuring the distance from the wall to (roughly) the edge of the module. That's my maximum L-girder length for the peninsula which will support Essex (near you & the doorway) and Deep River (which will be on the other side of a central backdrop, across the aisle from East Haddam). The stick on the floor roughs in where the front edge of the Essex side of the peninsula will be. 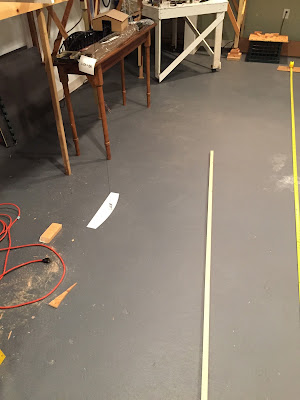 If you "embiggen" the photo (you can always click on a photo to make it larger), you'll see my handy-dandy plumb bob just above that white curve on the floor. Once I knew where the front of the Essex benchwork could be, it became obvious that I'd have a short choke point between it and the blob that represents "points west" on the Shoreline section of the layout. 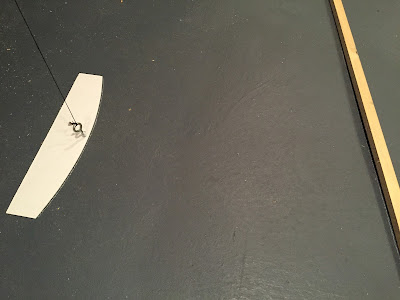 The plumb bob is attached to the farthest outer edge of the Shoreline benchwork and the white cardstock curve reflects where the fascia will be. Since the Shoreline loop is fixed and can't be any narrower (it's already at my minimum radius), I moved the stick until it was no less than 2 feet from the cardstock,

After operating the "north end" of the Valley line for a while now, I know that the choke point that exists between the Middletown blob and the Rocky Hill blob (22") isn't a problem since there's LOTS of space on either side of that point. So I figured 24" here between the Shoreline blob and Essex would be acceptable as well.

So, when you enter the room, you have ample (4 plus feet) of width before you get to the choke point, and after that - when you're in front of the Somerset module - the space goes back out to 3 feet or so.

The next potential choke point would be between the Mill Hollow module and the end of the Essex/Deep River blob/peninsula. 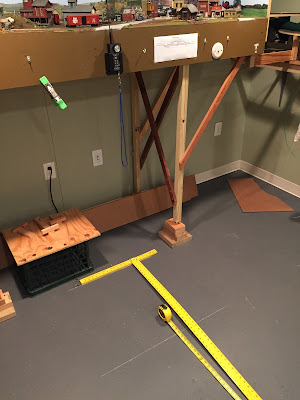 I again used my plumb bob (it's hanging from the green clamp on the left) to help me mark on the floor where the front of the module's fascia is. A large T-square made marking the parallel line (representing the end of the blob) easy, but you can certainly get by without it.

At first, I figured that I'd go down to 24" again - but after (lots of) additional thought, I decided on 30" because: 1) the width of the blob would make any resulting choke point that much longer, 2) there'd often be operators at Mill Hollow and having the blob fascia practically hitting one's back would make things feel cramped, and 3) 30" is about the width of a standard door - so should feel comfortable, or at least familiar to folks (and 36" would shorten Essex and Deep River too much).

The next choke point would be the "inside" of the blob - the 180 degree curve between East Haddam and Deep River. 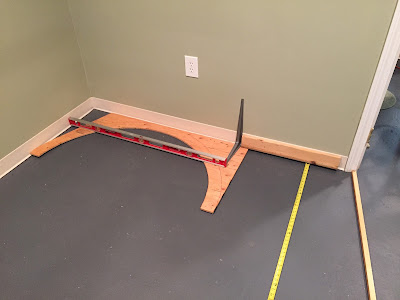 You can see that curve mocked up on the floor above. East Haddam will be along the wall to your left, Deep River will be roughly to the left of the yellow tape and on the opposite side of the aisle from East Haddam. You can see the doorway and the "Essex fascia stick" at the right. Standing on the inside of a 24" radius curve would definitely be snug, so I'm planning for the Deep River end of that curve to flare out a bit to make the aisle wider.

It occurred to me once I got this all roughed in that this area may get very crowded depending on whether the Valley Local and the Shoreline Local - which exchange cars in East Haddam - are in town at the same time(!)

Hmmm.... guess we'll have to see after a few ops sessions. There's not a lot of wiggle room - things gotta go where they have to go - but one of the many benefits of L-girder benchwork is that the aisle width is easily adjusted. So I'll see if I can widen the aisle here a bit, even if I have to sacrifice some foreground scenery in East Haddam and Deep River to do so.

My final step was to rough in the end of the peninsula a bit more and check clearances on each side of it, and I'd already determined its limit toward the Mill Hollow module. 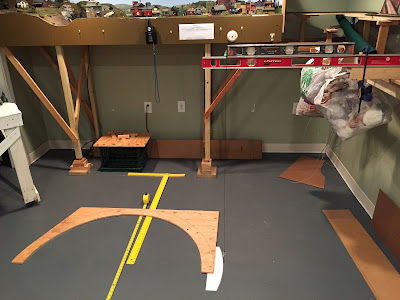 Boy, that plumb bob is hard to see in the pic above, but it's hanging from the level, 24" from the end of the joist there on the right. Again, the cardstock curve shows where the edge of the fascia would be and the plywood shows me where the track subroadbed will go. Fortunately, there's "plenty" of room on the left side of the blob (relatively speaking), so no need to figure a choke point there. 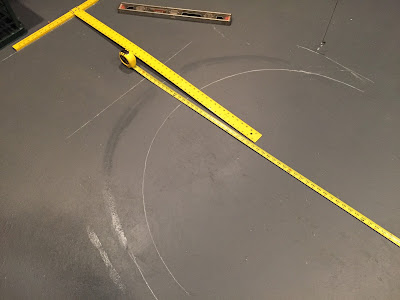 This is one of the funner parts of all this roughing in - seeing some "track" down on the floor - in this case, chalk lines showing where the subroadbed will go (bonus: just erase mistakes with a damp cloth, as I've done here). 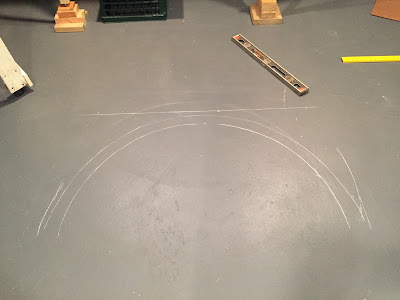 And heres - again, roughly - is where the end of the peninsula will go, having taken into account aisle widths on all three sides.

All this takes some time and some thoughtful work, but once you have your aisles figured you know the rough footprint of where your benchwork will go. And once you know that, you know much better how much material you need and what exactly you need to build (how many L-girders, how many legs, how many joists & what length). Remember: L-girder benchwork makes it easy to adjust things as you go - or even at some future time.

It's just important to get a good sense of where your aisles will go and to know where your choke points will be. Planning the aisles first not only prioritizes the people that'll be operating your railroad, it also is the critical first step to building your benchwork. 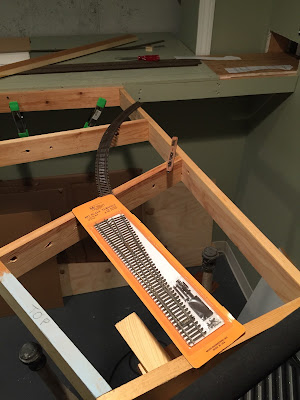 After all this though, I couldn't resist putting some real, actual track on the wye benchwork. Before finalizing the position of that benchwork section, I just wanted to confirm that the track could go where planned. Thankfully, it does. Whew!

Bonus: I can really start to see this area coming together - sure adds a great jolt of motivation to keep going!
Posted by Chris Adams at 12:30 AM