I don't know if it'll become as regular a feature as "Wordless Wednesday," but Throwback Thursday will give me an excuse to post some early construction photos - which will hopefully be especially interesting now that I've started some scenery and made some significant progress. Well, at least I'll find them interesting...

For my first TBT, here's a shot of the Rocky Hill/Wethersfield peninsula laid out on the floor: 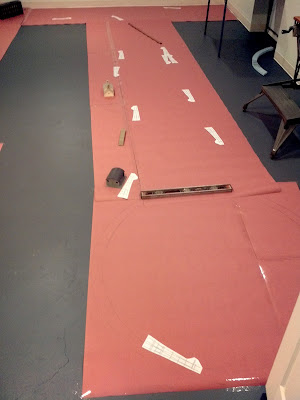 The Rocky Hill area is being mocked up at the left there. Early on, I thought I could have a turnout further back ("north") along the turnback curve to make a longer siding, but that proved unworkable. That quonset hut is a little "south" of where the station ended up being. And you can make out another turnout template - and loading dock - where I thought I could fit the foundry. But - alas! - I didn't have enough space.

But I think it worked out ok in the end. Here are a couple of shots from just a few days ago standing (very roughly) in the same location:

The difference is pretty amazing - and would be especially impressive if that first photo of the mockup hadn't been taken almost four(??!!) years ago (11/25/2011, to be precise). I clearly work in fits and spurts. Fortunately, I've been in a, um, spurt lately.

Speaking of that first photo - it may be the first time I've given any hint of how I go about track planning. Just briefly - I do some rough chalk sketches on the floor (mostly just the major curves and tangents) to make sure things have at least a chance of fitting as expected. Then I lay out paper on the floor and use turnout templates and a sharpie to mark out where the track will go. It's a long trial-and-error process to try and fit things. And, as you can see, not everything makes the cut.

Literally. Once I get the track layout settled, I cut it all out from the paper and use those cutouts as templates for cutting the plywood subroadbed. You have to be careful to label things well - especially where you have to cut across the track/subroadbed. Just be sure to label each end of the paper - and the plywood - so you can match everything up later.

I may go into my process in more detail in a future post (especially if there's a little clamor for it :^) but for now, it's just cool to see how much this area has changed. After doing so much historical research and seeing on the prototype how often things change for the worse or are lost entirely over time, it's neat to see an area change for the better - even if only in HO scale.
Posted by Chris Adams at 12:52 PM