(For a great & quick prototype overview of the New Haven Railroad's premier passenger locomotive - including LOTS of great photos - be sure mosey on over to this site. Ed Ozog has produced a fantastic and comprehensive website for all NHRR steam locomotives there.)

If you got the Broadway Limited Imports (BLI) model of the New Haven Railroad Class I-4 Pacific, Congratulations!!  It's an expensive model, admittedly, but well worth it IMO. The only other model that even comes close was done by Precision Scale and that retailed for around $1,500(!). This model has just as much detail and retails for less than half the price ($699.99). Yeah, $700 is nothing like what we "used to pay" for steam locomotives, but before you choke on your coffee, consider this: That $700 would be "only" $215 in 1980. And trust me, a 1980 vintage steam loco model would not look nearly as good or run nearly as well for anywhere near that price. Oh - and it wouldn't have sound, or DCC.

So if you haven't gotten the BLI I-4, do yourself a favor and get one. It's an absolutely exquisitely detailed model and quite a bargain (especially at the "street" price of around $550) - and it's the only way you're gonna have a just-about-perfect NH I-4 anywhere within reach.

Once you get it and take it out of the box, there are a few things you'll want to be sure to do before you put it on the track. Thanks to friends Joe Smith, Pete Luchini, Bill Shanaman, John Sheridan, and Paul Cutler for the following tips - they blazed the trail and show the way to I-4 operations happiness...

For some reason, BLI doesn't supply even a little bit of smoke fluid for its model and the smoke unit switch is "ON" by default, and even worse according to the Operator's Manual, you "will damage the engine" if you operate the smoke unit without smoke fluid.

So turn off the smoke generator before you even test run the engine. Here's how you do it: 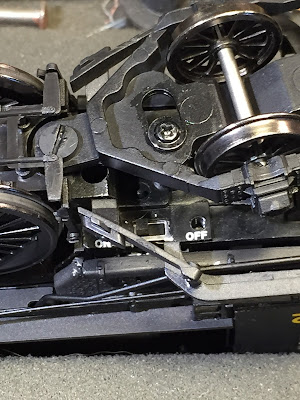 The switch is located under the cab, engineer's side. Turn the loco over (I put it in a foam cradle) and use a small screwdriver, toothpick or something to just move the slide switch over from "ON" to "OFF"

Alternatively, you could press F7 on your DCC controller, but that would require you to put the engine on the track with power. I'm risk averse - so I think sliding the switch is a better first step. F7 will come in handy when the smoke unit runs out of smoke, but you don't want to stop running the engine.
I admit I'm not so good at this. I really should make it a habit to check the gauge of all wheels of everything before it goes on my track. But I don't. It's really necessary you do so on the I-4 model though. There have been reports of drivers being out of gauge - rare, but possible. BLI is good about sending replacements, but if you run the engine without checking the gauge first and it's derailing - out-of-gauge wheels are the likely culprit.

Speaking of wheels, you'll want to be sure to check the treads and clean them if necessary (not the rear set of drivers, which has traction tires). Check the tender axles too, where the electrical wipers touch. Making sure all those points of contact are clean and free of oil-residue will make for much smoother running.
And speaking of electrical contact, make sure the plug that connects the tender (and its associated electronics) to the engine is FULLY AND COMPLETELY seated in its socket. If you don't you will experience erratic operation, intermittent power pickup, and - worse case - you'll hear the engine making sounds, but it won't move at all.

That's all I've heard so far that you want to be sure and do before you even test run this engine. If you've discovered other must dos let us know in the comments.

As for "nice-to-dos" - here are some additional tips you'll want to do pretty early on:

Once you run the I-4, you'll probably want to lower the volume because it's set at its max from the factory: CV133 = 128 by default. Setting CV133 to "32" or even "16" instead results in a less ear-splitting decibel level.
The operations manual covers this on page 10, but it basically refers you to your DCC system process. If you have DCC, you likely know how to do this already.
The bell sound is from a recording of an actual New Haven Railroad steam locomotive bell - reputedly from off an I-4(!). It doesn't look like you have a choice of bell sound - but you wouldn't want to change it anyway. If you want to change the ring rate though, modify CV180. Higher values result in slower ringing.

We model railroaders generally aren't a big fan of manuals/instructions - choosing to charge ahead rather than "waste" any time. But I highly recommend you read the BLI manual. While I've hit the most important stuff here, there's lots of other great information spread throughout that little booklet, including how to remap function keys (pp. 17-18), and a complete list/description of CVs as well as their default/factory settings (pp. 22-23).  I, for one, was intrigued by the "quillable whistle" capability - which I wouldn't have known about if I hadn't read to the end of the manual (p.26).

If you have any additional tips, advice, or cool CV changes to offer, I'd sure like to know about them - so be sure to leave a comment below!
Posted by Chris Adams at 12:30 AM