Should I Stay or Should I Go? - Bridging the Chasm

Now that my first layout tour is in the rear-view mirror, it's nice to get a little bit of a breather from the manic & intense activity of the last bunch of weeks - but I know that I'm most motivated when I have a goal to work towards. So the only question is, "what should I do next?"

Two alternatives present themselves immediately: 1) I could "stay" - which is to say, I could focus on consolidating the gains of recent months, scenicking and bringing the newly constructed areas (as well as the rest of the layout) up to the level of completion of the Rocky Hill scene; or 2) I could "go"  - push onward, and "northward," from Old Saybrook to Essex and beyond - building new areas as I go.

Your answer - or at least my answer - to this question probably depends on what excites you more. What gives you the most motivation? Which alternative will give you the most measurable progress? And - if you're operations minded - what will get the railroad to the point where it's fully operational as soon as possible?

In my case, the answer to all of these questions is to GO!

While I've had a few ops sessions already, starting way back in October 2013, they've been limited to just two locals (Valley Local - Hartford to Middletown & AirLine Local - New Haven to Middletown). But now that Old Saybrook and the Shoreline section is in (not to mention the Saybrook wye), I'm within striking distance of full operations - all 4 locals, plus mainline trains (well, once I build Essex to Haddam).

The only way to connect Old Saybrook and the Shoreline to the rest of the railroad is to bridge that chasm. So tonight I started to mock things up a bit to figure out how to go about it. 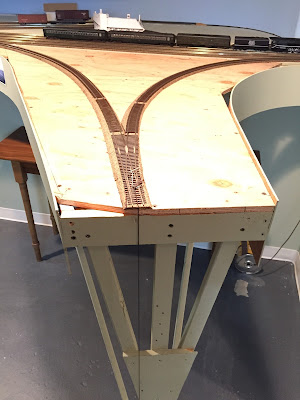 I tend to plan things full-size, right on the floor, so my first step was to transfer the location of the end of the wye to the floor. So I got out handy dandy plumb bob. You can see the string hanging down from the track centerline in the pic above. 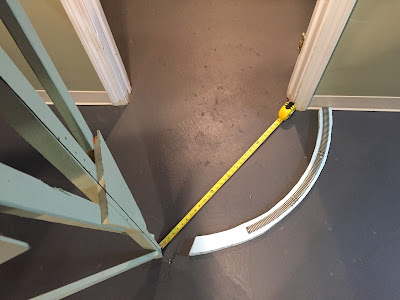 Here's everything temporarily in place, waiting for my chalk outlining. As you can see, the plumb bob shows on the floor where the end-of-track is, and I've placed my "subroadbed template" in place, with 24" radius (my minimum radius) track on top of that. The tape measures the 33.5" 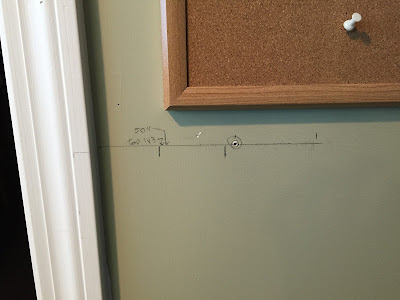 The plumb bob works both ways - you can also use it to transfer points on the floor up to where you need them. In this case, I marked the outer edges of the subroadbed template on the wall where the track will enter. As you can see from the markings, I'm leaving myself plenty of wiggle room for adjustment. In case you can't read it, the horizontal line is at the same height as the 1x3 at the end of the Saybrook wye benchwork. I marked it using a 4' level from the top of that benchwork to the wall.

I next had to figure out whether I wanted to do a lift out, swing up, swing gate, or dropdown (no way was I going to have a duckunder). I ruled out a lift out immediately since it would require too much time to put in and take out. I've also discovered (based on the liftout I have between the two modules) that it's hard to keep things lined up precisely over time, given all the handling. And I didn't want anything to swing up since it would be right in the way, in everybody's line of sight - and might even hit the ceiling. So that left a swing gate/door or drop down.

I'm really intrigued by the swing gate/door option. Doors have been around for a long time (duh) and the "technology" is proven. I could basically buy a cheap door, cut it down, install it, and build my benchwork on top of it. BONUS: it could swing out (just like a door) if anybody had to get out quickly.

Once I mocked things up though, the problem with this approach became clear: 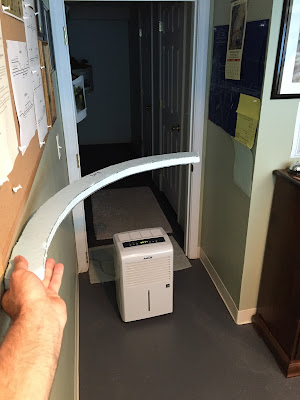 Even if I was able to get it really tight against the wall, it would still stick out quite a bit into the space I'm reserving for the Agent/Operator's office (not to mention obstructing whatever limited aisle space I have there).

So that leaves a drop down. A quick initial mockup was encouraging:

And the more I "tried" it (as much as I could under the circumstances), the more it looked like it might actually work...


Bill suggested a piano hinge, to keep everything lined up, and I found one that should work: 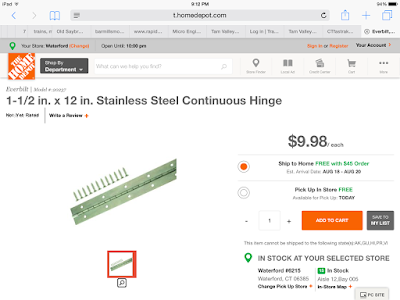 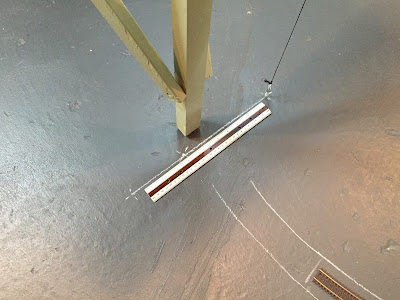 So, in addition to the track centerline mark, I used my plumb bob to add marks for the end corners of the Saybrook wye benchwork, and used a 12" ruler to show where the piano hinge will go.

The next thing I need to figure out is how best to secure the non-hinge end. Any suggestions?

For that matter, is there anything I'm missing? Let me know if you have another approach to bridging the chasm that you'd recommend, or if you know of any good articles/videos on how best to do this.

And if you see anything wrong with my approach so far I hope you'll let me know before I start building it! %^)
Posted by Chris Adams at 12:30 AM