As I contemplated bridging the gap between Old Saybrook and Essex, I seriously considered doing a hinged drop-down. I even bought the hinge! But after getting some more input from folks, it looks like the easiest and most reliable (though perhaps not the most convenient) approach will be to do a liftout instead. So tonight, I started plotting that out. 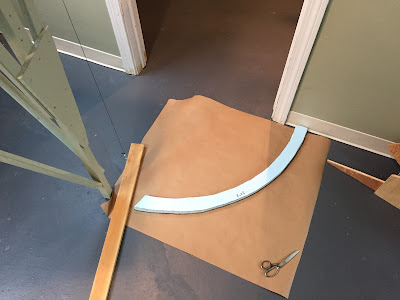 I thought the first thing I ought to do is make a template that I could use to cut the plywood subroadbed. The chalk marks I had on the floor wouldn't suffice, so I put down some kraft paper to mark up. Here you can see I lined it up with the wall, put my curve template down, and put a piece of wood down to mark the edge of the Saybrook wye benchwork. 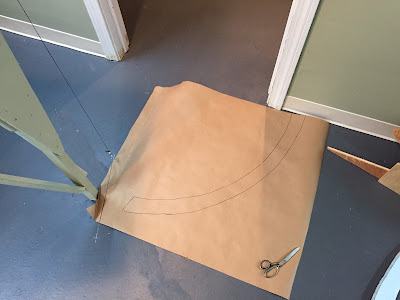 I then marked the outlines using my Sharpie. You can see the result above.

I thought at first that I would just cut out the plywood to fit and the attach the 1x3 supporting structure to it. But I realized early on that this was going about it backwards. Better to build the supporting structure first. So I needed to create a "lip" on the wall and on the end of the wye benchwork to give something for the lift out structure to rest on. 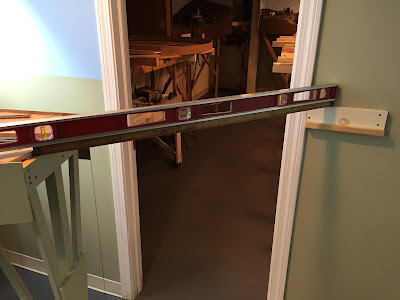 Here you can see the "lip" I attached to the wall. It's really just a short L-girder turned upside down. The vertical piece is a 1x3 to match the wye benchwork and the "lip"/flange is a 1x2. This support is just long enough to allow me to screw it into studs. In the photo above, I'm confirming that it's still level across the span. 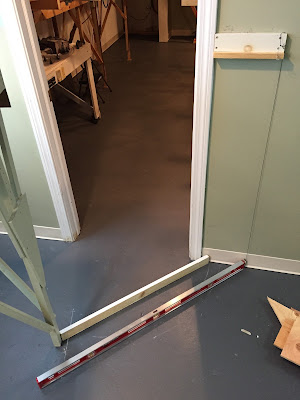 To get an idea of where the sides/girders of the liftout would go, I dropped my plumb bob from the end of the support to the floor and laid my 4' level down where a side/girder would go - it's lined up so each end would be fully supported by the lip/flange at each end. You can barely make out from the chalk marks the fact that the track goes outboard of the girder. The only way to avoid that would be to either have a much longer girder (and wall support) or have two 1x3s meet at a corner in the middle of the span. Not good either way. 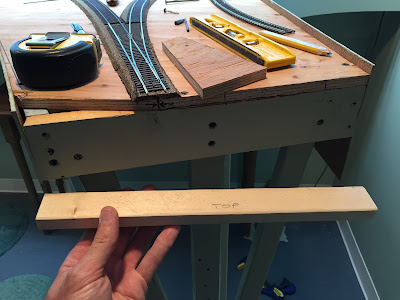 Oh - here's a 1x2 lip/flange about to be put into place at the end of the Saybrook wye benchwork... 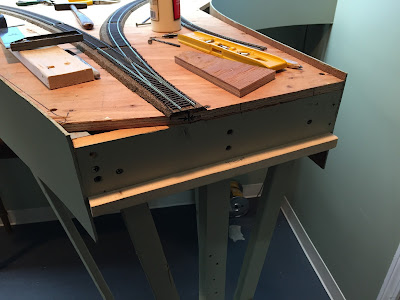 And here it is in place - glued and screwed.

After a lot of fitting and cutting, I now have the outline of the liftout: 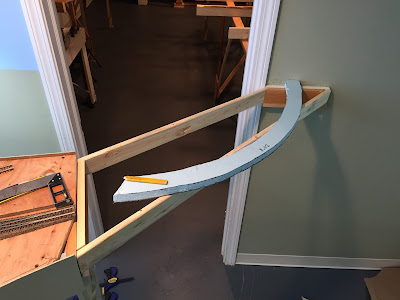 I put the curve template where it needs to be to get the track from the turnout to the wall at no sharper than a 24" radius. I'm not super happy with the track going outside the side girder, but I didn't want essentially to "break" that side girder into two pieces and have them meet at an angle/corner. I'm not too worried about supporting the subroadbed - I can put in a couple metal L brackets if necessary. And I can add short pieces of 1x3 perpendicular to the side girder to support a fascia which, if pushed out a bit from the track, would establish a buffer outside of that curve.

I don't have but an evening's work invested in this so far - and much of that time was installing the inverted-L-girder supports, which are necessary no matter what I do. So now that you can see what I'm trying to do, what do you think about this approach, particularly where the track/subroadbed is going to end up?

Your comments/input/advice is VERY welcome and appreciated!
Posted by Chris Adams at 8:02 PM