Backed Up at the Backdrop

While it's true that layout progress has lagged these past two months due to other projects, another (and maybe even bigger) reason is that I allowed myself to get stuck trying to create the backdrop at Wethersfield.  My problem is essentially that I know too much about the prototype, how it's supposed to look. And I don't have any photos that come anywhere close to that - nor do I have the painting or PhotoShop skills to make them up.

Maybe you can offer some advice that'll help me get past this roadblock.

By way of background (excuse the pun), when you're standing in the aisle looking at the Wethersfield scene, you're looking west. North (to Hartford) is to the right and south (to Middletown & Old Saybrook) is to the left. The Silas Deane Highway (aka "New State Highway" during my era; aka Route 99 today) runs parallel and to the west of the Valley Line anywhere from 200 to 1000 feet away, though typically around 500 feet away.

Adding to the challenge are 3 roads I model that cross the Valley Line and head straight back into the backdrop (and intersect with the highway). Going from south (left) to north (right) those roads are Wells Road (Valley Coal), Church Street (Gra-Rock & station), and Jordan Lane (Wethersfield Lumber & Ballantine's).

Here are a couple of maps showing the relationship between highway and road:


And here are a few recent photos to show you how things look today:


Now, admittedly, things are much more built-up now than they were in 1948. But the topography is the same as is the location of the highway in relation to the railroad.

By way of comparison, here are some shots from the other extreme - about 20 years before my era (and, incidentally, taken around the same time as the Sanborn maps above):


That's all the prototype/primary source material I have on these roads and backgrounds. The only other info I have are reminisces/memories from John Wallace & Dave Messer - that in the late '40s you'd see it a bit built up, with a smattering of commercial buildings, houses, and trees (though the trees weren't as prominent then as now). The only photo John had that was taken looking west from the highway was this shot of the (old) Wethersfield High School, just south of Church Street and west of the highway:

(edited to add): Thanks to Bruce Wilson over at the AML Nation, I was reminded that I also have this overall view of Wethersfield, looking north in 1938:

So far I just have a mockup of some backdrop photos that, while taken in Wethersfield, don't look anything like the area west of the mainline (or how I imagine it to look in 1948). 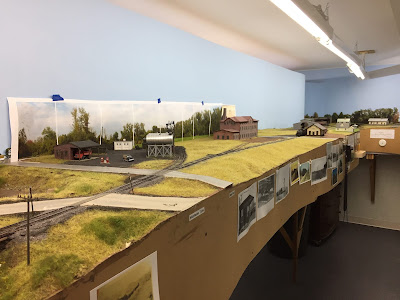 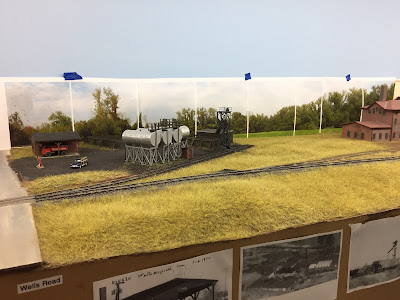 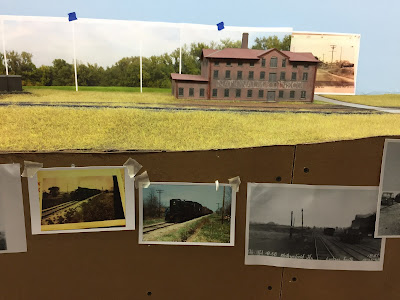 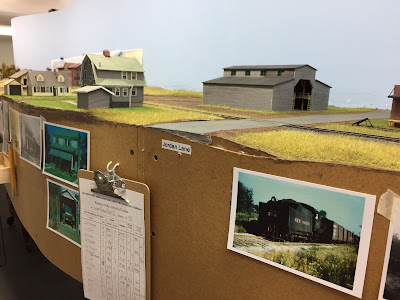 Note the photos on the fascia (click on the images to enlarge), many of which were taken around my era and give at least some sense of the right look and feel of the area.

Trying to figure out a way to reconcile all this information into a credible backdrop for Wethersfield is what has me well and thoroughly stumped. I even started trying to PhotoShop a background for Jordan Lane (using - incredibly - a screenshot from a color video of Cortland, NY filmed in 1960. Click here for the result of that experiment).

I guess the easy - and perhaps only - resolution would be to just put a low treeline on the backdrop, contriving it as screening the highway from view. But I still have to deal with those pesky roads heading straight into the backdrop, and the intersections with the highway that would be obvious to anyone familiar with Wethersfield. And of course there should be at least a hint of "something" back there - house roofs, commercial buildings - might even try somehow to include that nice color picture of the high school.

Oh to have a drone - and a time machine - to go back to 1948 and shoot the color photos I need from the height I need them!!

A guy can dream.

But I also figure I'm not the only one that's ever confronted this sort of challenge. If you're one of those folks, I definitely want to hear if/how you prevailed. Actually, I'd love to hear from anyone that has some advice for getting me past this obstacle.

In the meantime, the Missus came up with a temporary solution: "You have three whole rooms of layout in the basement," says she, "and there's a lot of it that is just foam and plywood - not even any ground goop or basic scenery. [ed. note: yes, the Missus knows about "ground goop"] You've made lots of progress doing that - why don't you do that on some other parts of the layout while you're figuring out what to do with the Wethersfield backdrop? At least you'll still be making SOME progress and your operators won't have to run trains over bare foam and plywood."

Yes, I married a smart Missus, for sure.

So, while I continue to mull the backdrop - and wait to receive what I hope will be lots of sage advice - I think I'll move on to the Dividend section of Rocky Hill. It's the next section south that's only plywood & plaster (and now foam) and I already have all the buildings that go there.

In the meantime, I hope you'll have some fun trying to help me around my Wethersfield roadblock.
Posted by Chris Adams at 7:28 PM