Thanks to all of you that have taken some time to comment on my Backdrop Backup, whether in the comments below, on The Valley Local Facebook Group, or by direct email. I really appreciate it and am enjoying feasting on all the food for thought. If you haven't weighed in yet, I hope you will. It's this sort of feedback that's such a big part of the reason for blogging in the first place - so thank you!

As promised at the end of yesterday's post though (prompted by The Missus, and confirmed by some of you), I'm turning my attention for the time being to the Dividend section of Rocky Hill.

In case you're relatively new 'round here, and by way of introduction, Dividend was the location of the largest industry on the Valley Line during the era I model - The Hartford Rayon Company.

Thanks to some research from my friend Bill Shanaman (who also models the Valley Line), I've learned that Hartford Rayon received tank cars of chemicals in Stauffer tank cars, pulp wood mostly in Canadian National boxcars (though occasionally MEC or BM cars) and twin hoppers of coal from the B&O (though I'm unsure where those were unloaded... Bill?). Finished rayon was shipped out in (probably/mostly New Haven) boxcars. The plant was especially busy during WW2 producing parachutes. But even after the war, with the post-war boom of consumer production & consumption (pantyhose, anyone?), it kept the Valley Local busy with traffic.

There's some additional detailed history of Hartford Rayon at this site and if you want a a really in-depth education about the rayon industry, check out this 1944 report prepared by the Textile Division of the United States Tariff Commission (courtesy Google Books).

But back to the layout - literally. Here's the Sanborn map of the area to orient you:

Unfortunately, if I followed this old map, my track layout would be all wrong for 1948 since John Wallace specifically described the switchback operations in his Shoreliner article (and was also confirmed by photos closer to my era).  During WW2, there was a bulk oil distributor further north on the tailtrack (which you can see at the far right end of the map), but that business went back to barges after the war so I won't be modeling it (and don't have the space for it anyway).  To the left (south) end, you see the "tank" track curving off to the southeast

Fortunately, much of the plant is still around. It ceased being a rayon plant after 1965 and was owned by Pratt & Whitney from then until 1997. I'm not certain what it is now.

Regular readers will know that since the photo above, I filled in the terrain with cardboard strips and plaster cloth (actually, I think my friend PeteL actually did that during a scenery blitz in July 2015 and here's proof!). But the last time I actually posted anything specific about modeling Dividend was way back in November, 2014(!) when I made the mockups for Hartford Rayon and I haven't done much there since.

So this Dividend is a bit overdue (ok - I'll try to keep the puns to a minimum).

After the mockups went in, here's how the area looked for about 5(!) years: 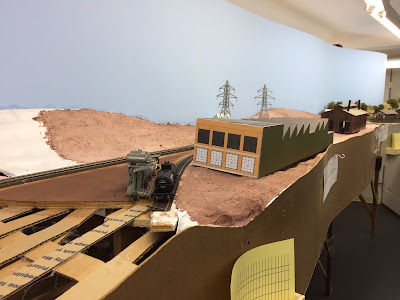 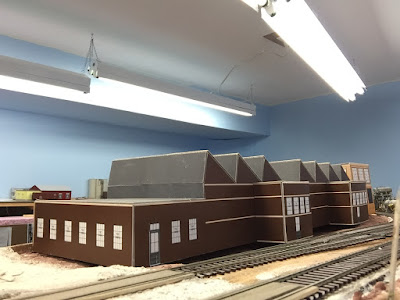 And here are a couple of photos of the current track arrangement, which is going to be changed based on some new research. 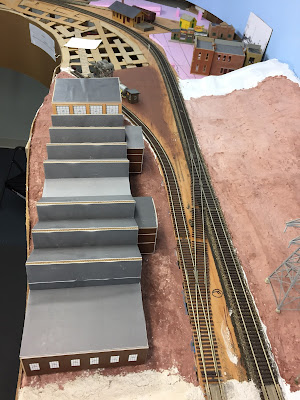 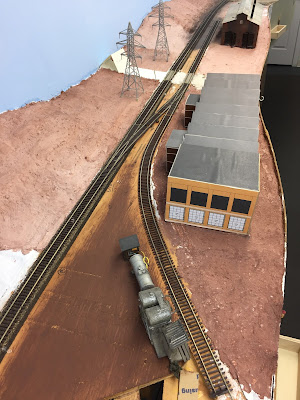 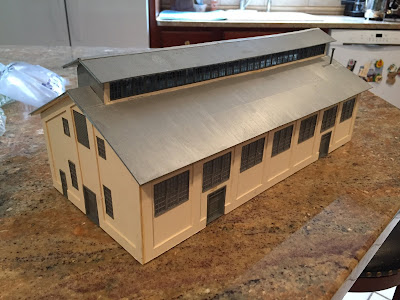 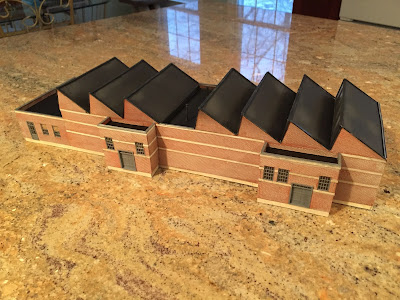 Eagle-eyed readers will remember seeing them shortly after they arrived last October. But at the time, I was doing a lot of posts about MARPM, "OP"toberfest, and up to my neck extending the Saybrook scene, filling in around the Air Line, and working on East Berlin. 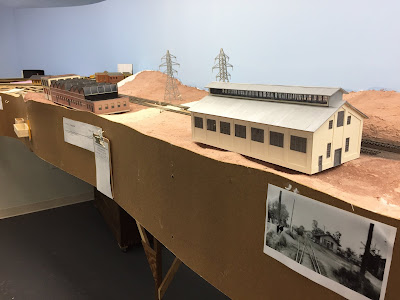 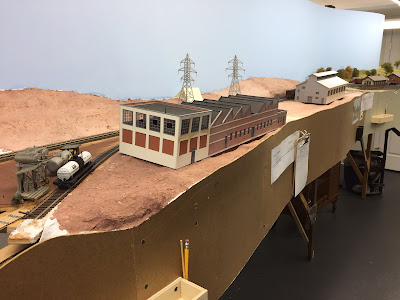 I did at least place them on the layout though, which was an immediate huge improvement over the stand-ins that had been there since Fall of 2014. But, like adding "just" a coat of fresh paint to a room sometimes leads to a total redecoration, these fine structures made it clear right away that my terrain was all wrong.

So during the first couple of weeks in December, I changed all that but never got around to posting about it. I'll remedy that in the next post.