One of my buddies has decided to upgrade his NCE DCC system by adding wireless throttles and some power management and he asked me for some photos of my setup. Since I'd need to explain the photos a bit anyway, I figured I'd do it here on the blog so maybe others could benefit as well.

There may be better & more highly recommended methods - and I'd sincerely welcome any input/feedback - but my setup has been working well now for over 5 years (on the fully built layout - 8 years from the start) now for whatever that experience is worth.

So, without further ado, here's how I do it: 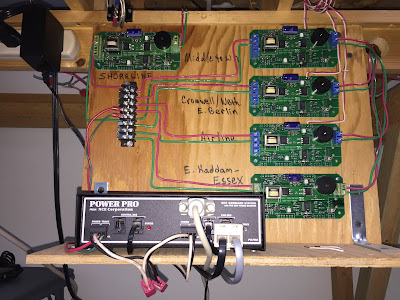 This is the main control center, centrally located under the layout at Middletown. I have just the command station with its built-in 5 amp booster distributing power to 5 different power districts, each through its own circuit breaker as you see here. I have no other power boosters on the layout and use approx. 10-12 sound-equipped locomotives which are all powered up and running during a session.

I also have about 250' of total main track (not including sidings/yards), but the way I've split the power bus, there is no length of power bus that itself is longer than a 50 feet. The bus itself is 14 gauge solid wire with 20 gauge feeders which are typically no longer than 12-16" long at the most. 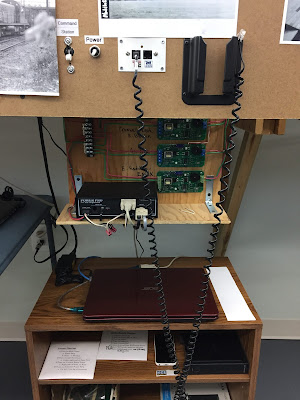 Stepping back for an overall view, you see the laptop I use for JMRI/WiFi Throttle capability, as well as the iPhone/throttle and router on the shelf below. The rest is standard: Power switch & circuit breaker between the wall power and the booster, as well as the first cab bus panel. I also have a section of track in Middletown that acts as a programming track and is wired from those terminals on the command station. 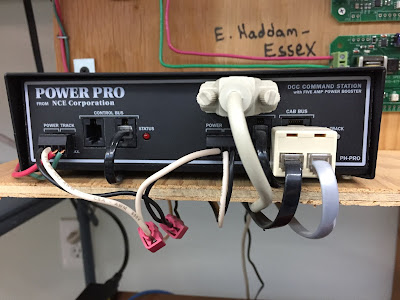 A closer view of the booster showing the first of many "splitter" phone jacks I use on the cab bus. This one splits the cab bus so that one cable (black) can go through the wall and to the "southern" portion of the layout (East Haddam down to Saybrook, as well as the Shore Line and the Airline), while the other cable (gray) heads up the Valley line from Middletown to Wethersfield. 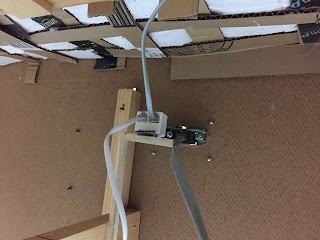 The cab bus and panels are daisy-chained according to the instruction manual. In the photo above, you see the next splitter, which splits the cab bus between the cable to East Berlin (the end of run), and a cable going up to the wireless transmitter (that wood brace holds the splitter up for good contact, despite the weight of the wires). 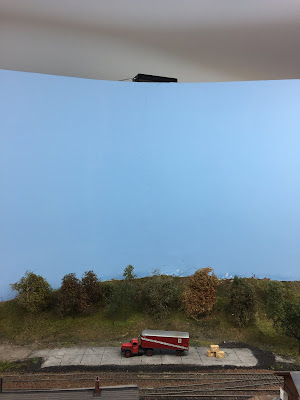 The wireless transmitter broadcasts the cab bus signal to throttles that have a wireless receiver (wireless throttles). It has to go at the end of a cab bus run (at least my circa 2003 version does) and best practice for best signal is to put it near the ceiling with the antenna pointed down.

I can attest to the fact that, despite the antenna being pointed down between the masonite backdrops, it still broadcasts a sufficient signal through stud walls into two of the other rooms. The only place I don't have sufficient coverage is at New London staging, which is located in the shop area of the basement behind a concrete block wall (so I have a cab bus panel and a non-wireless plug-in throttle at that location).

So that's the cab bus run from Middletown, up the line and terminating in East Berlin and at the wireless transmitter.

But what about the rest of the railroad? 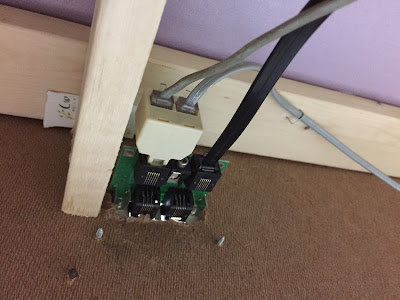 The photo above shows the black bus cable that comes directly off the command station and through the stud wall to a location under East Haddam in the other room. Here, I've used another splitter to split the bus into a run that goes under the Airline modules and one that goes south to Saybrook and the Shore Line. 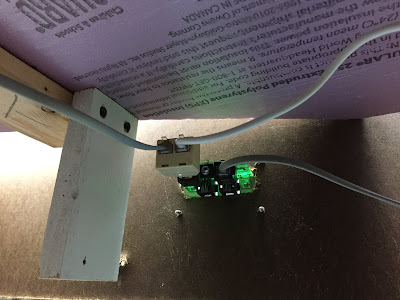 And yet another splitter - this one splits the bus so that I have a bus wire going back through the wall and terminating in my fast clock above the Saybrook control panel. 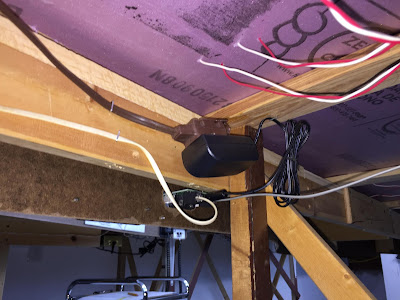 Since the run of the cab bus from Middletown to Saybrook & the Shore Line is so long, I needed to boost the cab bus signal by adding some power to the bus. The instructions that come with the UTP (Universal Throttle Panel, or cab bus fascia panel) recommends adding power every 40' of run. Fortunately, this is easy to do - you just add a "wall wart" power supply with the proper jack to the back of the panel. You can see how I did this in the photo above, and you can click here for more details. 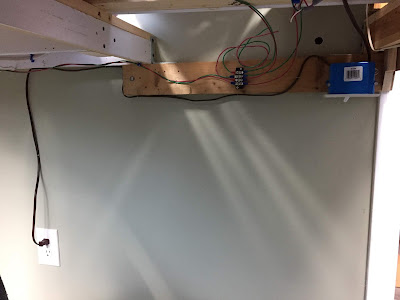 Fortunately, the panel I needed to power was at the 35' mark, located under Essex. Unfortunately, this panel was nowhere near an electrical outlet, and the wall wart/power supply cord wasn't long enough to reach. So used an extension cord, which I modified by adding an inline on-off switch. This way I can turn the power bus on when I turn on the layout, and - more importantly - turn it off when it's not in use. Again, click here for more details.

Of course, there's a bit more to all this, but this provides a brief overview. Like so many aspects of building a large(r) layout, the complicated things are typically just simple things repeated over and over - and sometimes modified a bit to address a unique situation.

But hopefully, even this cursory look has been somewhat helpful. If so, let me know if in the comments. And - even more importantly - if you have a different/better way of doing things, I'd love to know so I can try that out too.
Posted by Chris Adams at 2:25 PM