Taking my own advice from yesterday, to do more and - um - screw (around) less, I decided to forego reading much/anything about how to do ripples in water and Just Do It.

Well, to be honest, I did watch one video and read a few paragraphs out of one of my favorite scenery books before diving into water (effects) - figuratively, anyway. But that's a looooong way from my usual analysis paralysis.

I got started by using some of the new Woodland Scenics Deep Water Pour product (more on that in a future post) to create a "practice pond" on a whipped topping lid. 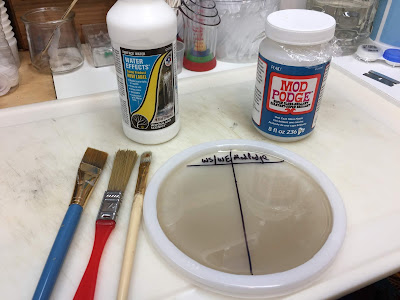 The "water" is murky looking cuz I used the "murky" version of the product. I then marked it in half, and experimented with WS Water Effects on one side, and Mod Podge Super Gloss Medium on the other side. 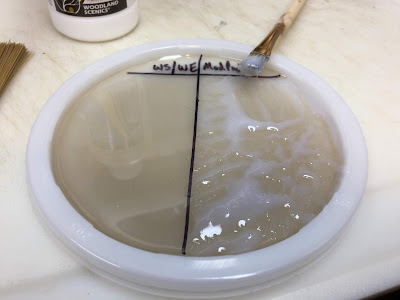 I poured on the Mod Podge first - and accidentally dumped a LOT on there. After I'd poured most of it back into the jar, I used a 1/2" brush to move the product around and create the best approximation of ripples I could imagine. 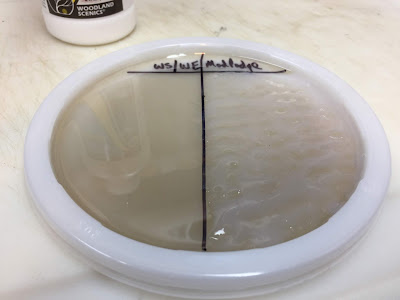 Here's the result, which looks pretty good! Unfortunately, it didn't stay that way.... 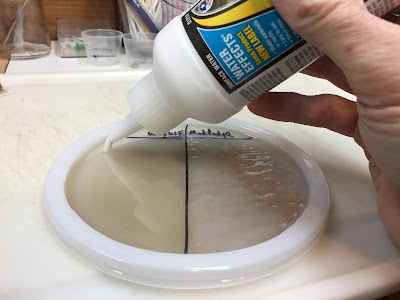 I next squeezed on some of the WS Water Effects . . . 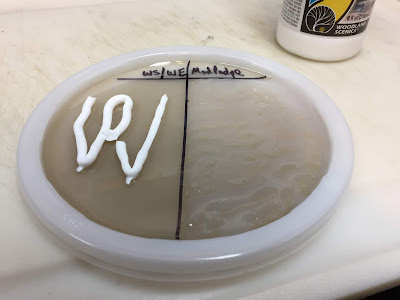 It comes out white and pasty, like your cousin Eddy. But don't worry - it dries clear. And you don't need very much . . . 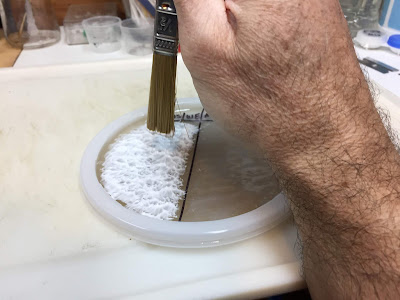 I then used a different brush to stipple the product into ripples/litte waves. 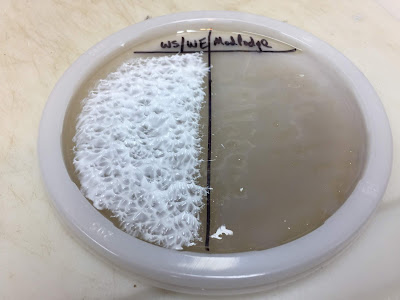 Again, looks pretty good! Unfortunately, you can already tell that the Mod Podge is beginning to level out a bit. 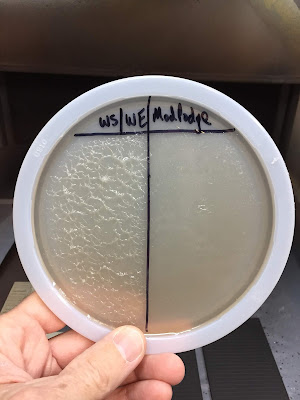 The Water Effects goes on white but dries clear, as you can see above (pic taken after drying/curing overnight). 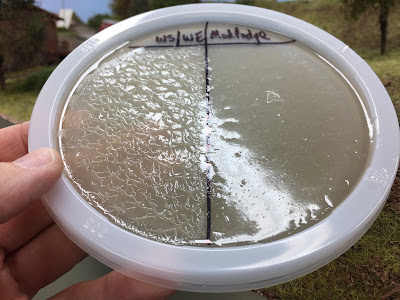 And, unlike the Mod Podge, the Water Effects holds its shape. 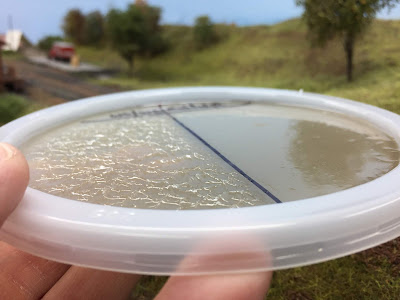 If my experiment is any indication, Mod Podge is NOT what I'd use for ripples/waves in the future. 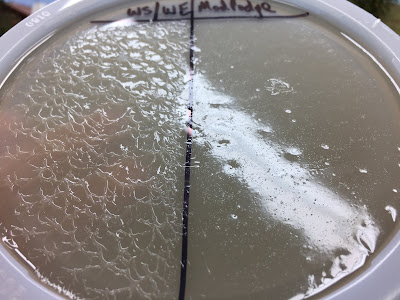 And as if that wasn't enough to convince me to use the WS product instead, look at all those thousands of tiny bubbles on the Mod Podge side. Admittedly, I didn't blow over the surface as I've read you need to do for EnviroTex, and I may have introduced many/all of those bubbles in the brushing/application process, but still. There's no comparison to the Water Effects.

I suspect in modeling water, you may get what you pay for. An 8 oz bottle of Woodland Scenics Water Effects retails for $18(!) compared to $7 for the same amount of Mod Podge. Yikes! And I readily admit there may be a different technique that works well with the Mod Podge - not to mention there may be a different, less expensive product that works the same, or as well as, the WS Water Effects (if so, I'd love to hear about it).

But if you're looking for something fool proof (insert self-deprecating joke here <g>), and you don't have a lot of water to do, I think you'd be hard pressed to find something that works as well right out of the box, er, bottle.

The main takeaway though brings us back to the beginning of this post - and echoes yesterday's: There's nothing like actually doing something - trying it out - to help you learn a new skill or technique. And if you don't want to risk experimenting on your layout, get yourself a Cool-Whip lid and try things out there. You'll learn a lot more by doing that than by reading reams of books and watching videos.

Now, I just have to figure out how to make effective ripples in a river, rather than a pond . . .
Posted by Chris Adams at 12:01 AM