Nothing like imminent visits by folks to come see the layout to keep me motivated! So I'm really trying to get this scene finished before Thursday and the Big Springfield weekend.

If visits are motivating, having to try something new can be very DEmotivating. Thankfully, one of the things I'm learning during this process is that experimenting helps you get over the hump of starting - and with little to no risk.

Case in point here is ripples on the water. I mentioned last week that I'd made a little "practice pond" to test out different ripple/wave effects. Well, the experimenting continues . . .

Neither effect is really capturing what I think looks right. Part of the problem though is that I'm not sure quite what exactly looks "right." The craft stick waves/ripples look more natural, while the brush ripples look - well - like brush strokes.

So, more research needed, but considering my New Years' Resolution, I figured I'd just try experimenting on the part of the river which will be behind and under the bridge. That way, if it's a fail, it won't be that noticeable. And being on the actual river, I'll at least get some "real world" practice.

I'm not sure how this is going to work out - especially since the "still" water looks so nice and reflective. And I fear that the edges of the ripples are too uniform - too much "in line" parallel with the banks. But at least the bridge will cover it :^)

While that was drying, I decided to try and finish up my road. I briefly mentioned at the end of my backdrop post that I made the road out of 3/16" thick foamcore board. That thickness matches up perfectly with Micro-Engineering Code 70 track. Just glue it to the same base that the track is glued to and trim it to match the ends of the ties. A quick coat of paint will getcha most of the way to "finished" but if you really want it to look good, you have to do a little more (but, surprisingly, not much more). 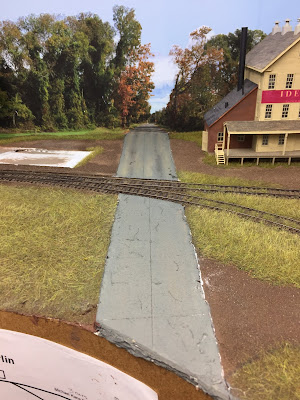 The first thing you'll want to do is peel off the top paper layer, revealing the white foam underneath. Luckily, the texture is very close to looking like concrete (to my eye at least) and, being foam, it's super easy to work with. I used a straightedge and made some "expansion joints" with an X-Acto knife - one down the center, then one crosswise every twenty-five feet. While I was at it, I also gouged in some cracks and potholes.

Next, I painted it with a gray craft paint which was a good match for the color of the road in the backdrop photo. But what really made things pop was when I took some brown and black weathering powders and matched the tire tracks & oil stains in the backdrop photo - "pulling" those colors from the backdrop and onto the foreground. 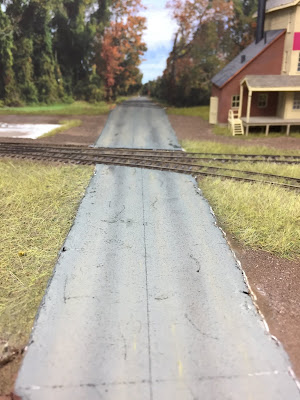 I really like how it turned out. My only regret - and I still am not quite sure how I managed it - is that the road isn't matched up and the expansion joints don't line up either. Somehow, the foreground section of road ended up narrower than the back section, and the centerline joint is off too as a result.

But would you have noticed it if I hadn't mentioned it? (hmmm.... maybe don't answer that :^) 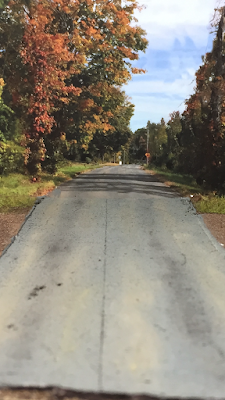 I'm certainly no Tom Johnson (click here for more of his work), but I think it came out pretty great. 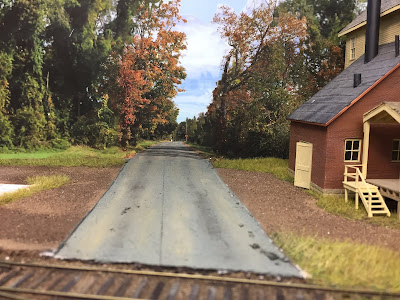 Next, I'm gonna have to figure out what to do about a grade crossing. But all in due time - at least I'm making progress!