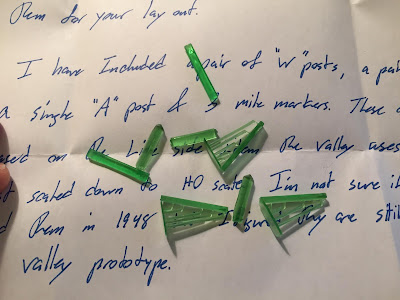 This photo may not look like much, but it actually represents one of the greatest things about being in this hobby.

A relatively new friend, ChrisZ, came over to operate The Valley Line for the first time last fall and, being a fellow employee of the real-life Valley Railroad (which operates over the same line), he took to it quickly and had a good time.

Fast-forward through the holidays and such, and I get a text from him out of the blue asking if he can drop something off. He didn't know whether he'd need to leave it in the mailbox, so he included a note. Fortunately, I was home so he was able to give me this in person.

What we have here are some lineside details (whistle posts, "Ring" posts, mile markers) patterned after the real-life Valley RR, shrunk down to HO scale. Yes, the "W" is recessed, and the posts even have beveled edges, just like the prototype!

But what we really have here is a great example of the camaraderie, thoughtfulness, and generosity of so many people in this hobby. Chris had gotten a resin printer for Christmas and just thought it'd be fun to create some "real world" details that are absolutely perfect for my layout. Just because he could.

I've often mentioned how lucky and thankful I am to have so many folks who have become friends through this project and who have so willingly spent some of their time and talent to help. I loathe to list them all, for fear of overlooking someone, but Bill Schneider, Dave Messer, Randy Hammill, Pete Luchini, Tom Derwin, Pieter Roos, Jim Dufour, Bill Maguire (via Greg Lane), Dick Otto, Mike Redden, Bill Chapin, Craig Bisgeier, Roman Daniels, Joseph Viener, Kaylee Zheng, and Lou Papineau have all - at one time or another - put time in on the layout. And of course, I wouldn't have even started without prototype inspiration from John Wallace's Shoreliner articles & photos and Max Miller's photos & support.

And there's no way I'm going to try and list all of the sources of model railroad inspiration - if you've followed this blog for a while, you know who they are.

Whether you've visited here and offered some feedback, tips, or advice - or you've taken the time to leave a comment or word of encouragement, I'm thankful and grateful.

But today, I'm especially thankful to ChrisZ for stopping by and reminding me again that, as many wonderful aspects there are to this hobby, the best part really is the people.
Posted by Chris Adams at 12:01 AM