I recently had my first ops session of the New Year, but this isn't going to be a typical ops session report.

First of all, it was one of my smallest sessions - just me and 3 other guys.

Consequently, we were down to 1-man crews, the Shore Line operators (John and I) had to operate our own switches at Saybrook Tower . . .

. . . and Bill operated two trains in succession - PDX-1, then PDX-2 (the Haddam Local). We even annulled the Airline local for the day, citing "crew shortage."

But despite the low turnout and the train we didn't get to run, I'll pronounce this session as one of my more successful sessions so far. Sure, John did an amazing job as a newbie on the Shore Line (we actually got to run a full schedule of trains), and I was able to test out some new paperwork (more on that in a future post). But it was the "after session" that really made this session stand out. 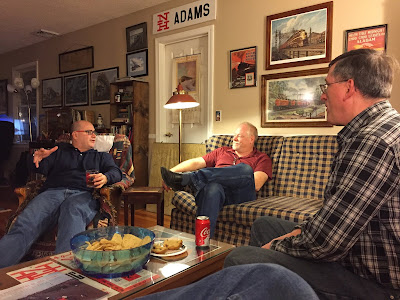 Since things were so informal and laid back, we all had (or perhaps made?) some additional time after the session to get a couple of drinks and snacks and head up to the train room (my remote-from-the-layout-"crew lounge") to visit and talk trains.

My ops sessions - probably like most of yours - typically end with a brief bull session. What went well? What needs some improvement? What changes are recommended? What changes have been made since the last session? Then folks head their separate ways. Sometimes, if we're lucky, we'll have arranged to hit a local pizza place afterwards to visit a bit (bonus: it happens to be a RR-themed restaurant in the old Saybrook freighthouse right along the Shore Line).

But folks are busy - everyone has tight schedules - and we're often (usually unconsciously) eager to move on to the next thing. So opportunities to just relax, visit, and enjoy each other's company are becoming more and more restricted.

Kind of like aisle space. It's typical to the point of cliche that, when you're designing a layout, it's all too easy to focus on getting as much railroad in as possible, while forgetting to allow enough space for the folks that will actually need to run the layout.

And sometimes, I wonder whether in our eagerness to operate our layouts we sometimes forget to allow enough time for us to actually enjoy the folks that come to run the layout.

If you're planning a layout, it's certainly best practice to be mindful of aisle widths - "Plan for People" is the useful mantra. But don't forget during that planning to also include some space & time for the folks when they and you are not actually operating.

Because sometimes an ops session is just incidental to getting to slow down a bit and spend some quality time with friends.
Posted by Chris Adams at 12:01 AM