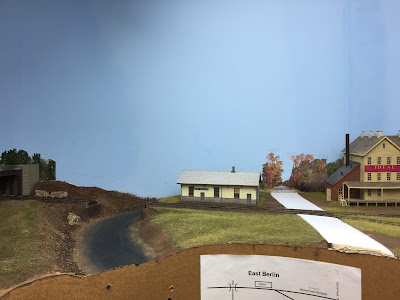 One of the easiest - and hardest - ways to add a LOT of depth and "scenery" to a scene is to install a photo backdrop. It's really hard (at least it is for me) to choose just the right photos for a particular area - and that's even more difficult when you're a committed prototype modeler and know how the area's supposed to look. Unfortunately, unless your modeling era is "the present" and you live close by where you can take photos of your chosen locale, it's hard to get the perfect photos. Heh - in 1948 everything is black and white, and very little looks the same nowadays anyway.

So, unless you want to wait to find photos that probably never existed, you have to be willing to compromise - to use photos which look as close to what you think the scene should look like as possible. In the case of East Berlin on my layout, I know that Berlin Street went up a slight hill and that there were (and are) homes up on that hill behind the station. And unfortunately, there's no way to get photos of any of that from a proper vantage point. Besides, did Berlin Street look in 1948 anything like it does today? I also have to try and blend in the right end of the Rt. 15 overpass, which on the prototype is MILES away - but has to be located here due to my space constraints.

What I do know is that there were at least a few trees behind the station and in front of those houses. So I figured a "treeline" backdrop along with a road "going off in the distance" would suffice. Fortunately, I have a bunch of treeline photos I've taken during Septembers and Octobers past (I model early/mid Autumn) and I even made it a point to take a few "roads into the distance" photos during those same time periods.

Unfortunately, finding/taking suitable photos is only the first step (although it may be the most difficult). Next, you have to get them into backdrop form. That means not only stitching them together (relatively easy, if you have enough photos of the same long scene that you took in sequence), but also photo-shopping them as needed to blend together photos that weren't taken together (as in the case of my "road" photo which needed to be blended with my "trees" photos). Oh, and you need to remove any anachronistic details - especially power lines.

There's a reason some folks command good money to do this work. You're a lucky guy/gal if you have a friend that'll do it for free. I'm lucky to have a couple such friends, but I fear relying on them too heavily, so I decided to try to learn to fish a bit myself instead of always having to ask for a fish. The photo-shopping process is way beyond the scope of this post, but suffice it to say that it wasn't quite as difficult as I thought it would be. 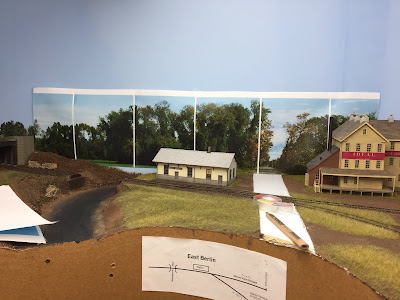 I started with a total of 6 photos. The left-most four were all part of a sequence that I easily stitched together. The fifth one was the road photo (a version of which I'd been using in this spot for a while - see the photo at the top of this post). The sixth/last photo on the right was another "treeline" photo, chosen since it was close to the same look as the right side of the road photo.

I'm not sure how long it took to blend everything together since I did it off and on over a few weeks and didn't keep track of time. My biggest tip though is to Save Many Versions of your work along the way. That way, even if you screw up something and don't know how to fix it, you can go back to a previously saved version and pick up again from there.

The photo above shows the six photos, printed out on my home printer on regular sized paper, and taped together to check scaling and coverage.

Here's another tip (though maybe I'm just not doing it right....): I couldn't figure out how to get Photoshop Elements to print a "banner." It kept printing out just the center of the image I'd created. The only way I could get the pages printed out to tape together was to save the image as a PDF and then use Adobe Acrobat to print that PDF version of the image as a banner. Acrobat divided up the image into the regular-sized paper and I was able to get my test print for sizing/scaling.

Now here's where folks that have read this far get the payoff....

Once your test print is the size and scale you need, save it again as a PDF (maybe include the word "final" in the filename) and take it to your local Staples store (or equivalent) on a thumbdrive. They print banners all the time and, at least in the case of Staples, will give you at least two choices of vinyl - indoor or outdoor.  The outdoor is thicker, but the indoor actually looks clearer to me (less distortion from the texture/thickness of the paper itself). BONUS - the indoor is less expensive as well, especially if you choose the matte polypropylene (which is all you really need). Comes to about $3.50 per square foot and is done while you wait (you may be able to get it a little cheaper if you wait overnight). 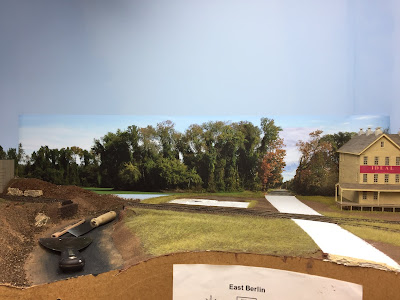 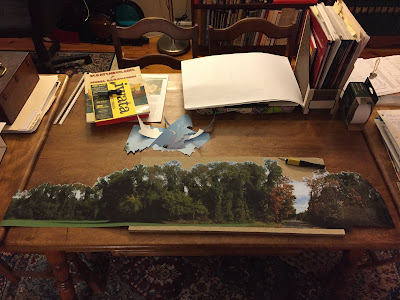 Once I confirmed all was well and fit as planned, I cut out all the sky - leaving a bit over the road for depth (my cut followed the top edge of a cloud). 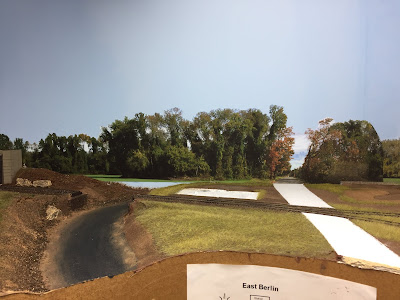 I've used glue stick to adhere previous backdrops, but those were smaller - and it was still a bit messy. This time I decided to use vinyl wall adhesive typically used to secure wallpaper seams. I temporarily taped the backdrop to the wall and made some light pencil marks on the wall along the top edge. I then brushed the adhesive directly on to the wall, keeping short of those marks. Once I placed the backdrop onto the wall and smoothed it out, where ever I needed a bit more adhesive along the top edge, I just applied it to the back of the paper with a small brush.  Keep a damp cloth on-hand to clean up any adhesive that may squeeze out. 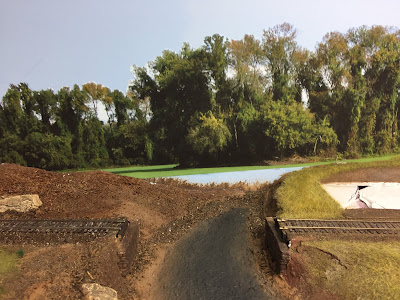 One challenge I had was that my backdrop didn't go low enough to meet my riverbank. And if I'd made the backdrop image that low, I'd be wasting lots of image hidden behind the scenery base. No worries - I just painted this blue area to match the surrounding scenery (which you'll see in a later photo). 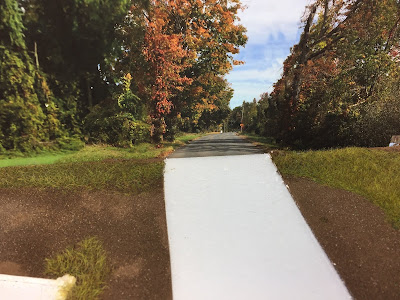 Another challenge - figured out during the testing/fitting process - was to make sure the road on the backdrop matched the road on the layout. Some work and patience paid off here. By the way, my road is a piece of foamcore - and I just peeled off the paper revealing the foam (and its great "concrete" texture). 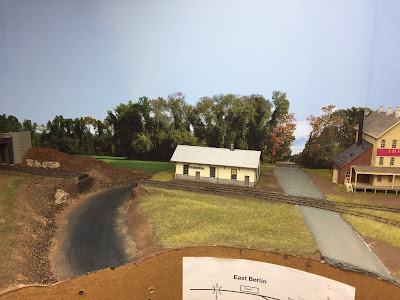 If I don't say so myself, you may want to be sure to click on this image to enlarge it since I think it came out pretty nice. I painted the foamcore with acrylic craft paints to match the color in the photo (I still need to to a bit of shading/weathering to match it perfectly), and as I mentioned earlier, I painted that strip of blue above the river to match the surrounding scenery. Covering this area with brambles and bushes will make that seam even harder to see.

As I said way back at the start of this post - adding a photo backdrop is the easiest way to add a lot of "scenery" and depth to a scene. Yes, it'll take some work - maybe a lot of work - but I daresay the result is always worth the effort.
Posted by Chris Adams at 12:01 AM