A Few Words About Wordless Wednesday #130 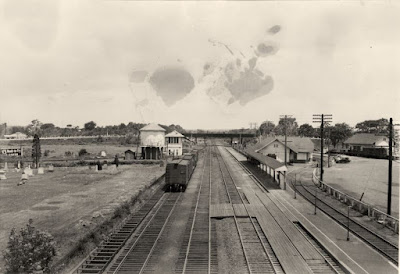 Sharp eyes will recognize this scene as Old Saybrook (aka Saybrook Junction) and was taken in June, 1939, according to the notes on the photo. Despite the degradation in the sky, it's an amazing photograph - made all the more impressive by the fact that it could only have been shot by climbing to the top of the signal bridge that spanned the 4 main tracks.

Of course, what makes it most wonderful for my purposes - since I plan to model this scene as closely as possible - is all the "modelgenic" stuff you can see in it (which you can see even better if you click on it to enlarge). Here's what I noticed:

Whew! the list above is just scratching the surface - there's a LOT to see in this photo! And it's All So Modelgenic. I just hope my skills are up to the challenge of recreating this scene in HO scale. Thankfully, I have some pretty talented folks helping me out.
Posted by Chris Adams at 12:30 AM