When last we left off, I'd laid the track for the extension right over the hinged drop-down across the doorway. Now I need to cut the rails and wire everything up. 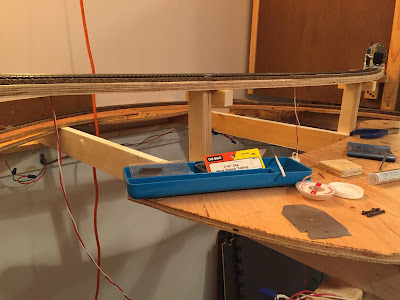 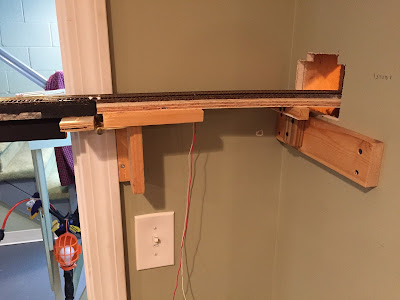 TIP: Make sure that you connect your feeders to the proper bus wire and not the most convenient one. In the first pic above, the bus wires for the Shoreline (the loop on the lower level) were already there and right next to the new Air Line feeders. Resist the temptation! Otherwise, part of the Air Line would be on the Air Line circuit breaker (power district) and part would be on the Shoreline circuit. It would operate fine, but a short circuit on that section might be difficult to track down.  So, yes, I ran an entirely new/separate Air Line bus to connect the feeders to.

Next, I ran bus wires across the drop-down bridge, testing as I went. Another tip: I use a simple buzzer to check my wiring as I go along - see below:

The bus goes right across the hinged end - solid 14ga bus to the terminal strip, and stranded wire from there for flexibility . . . 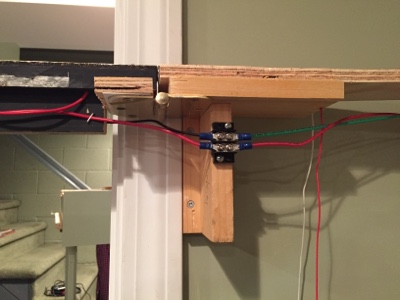 But the other - dropping - end needed a plug. I'd considered using magnets, but this was a lot more simple.

TIP: Be sure to get a polarized plug/socket - it's the one with one wide spade. That way you're sure to plug it in with the correct orientation every time.

I did all of this before cutting the rails because 1) I wanted to keep everything as rigid as possible during all this jostling around, and B) once you cut the rails there's no turning back.

There's really not much to say, provided you have a Dremel with a cut-off disk. But what I WILL say - and will strongly stress - is be sure to use eye protection!! Eyeglasses are NOT sufficient eye protection. Thankfully, I got past the first cutting with no problems - but only cuz I was closing my eyes toward the end of the cut(!) Who knew that the cut-off disc will grind sideways as well as cut vertically(?!)


So that pretty much completes the extension. Buddy Greg installed/connected feeders on the long tail track, and I still have to finish connecting the other feeders to the bus. But soon the Air Line will be back in service and ready for trains again!
Posted by Chris Adams at 3:31 PM