This past Friday I had what I hope will become an annual pre-Springfield tradition: an operating session to kick off the Big Train Show Weekend! I sent out the Crew Call the night before, and this particular Friday would be "Friday, October 5, 1948". . . 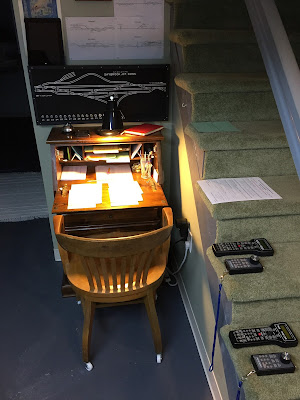 Unlike last time, I had everything prepared well in advance - including all the paperwork. And, since I got my Powercab, I even had a full complement of throttles! Good thing, since I couldn't get the WiFi throttle to work (JMRI was communicating to the phones, but not to the command station). 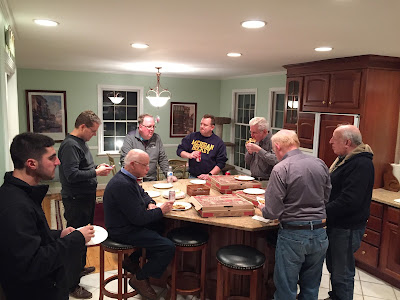 This was, by far, my largest operating session to date - an even dozen guys, including me. Marty, Bernie, & the-sadly-blogless Stic were up from the DC area, BillC was up from NJ, and Darren made it down from Canada. All were in the area for the Big Show and I'm psyched they were able to join our happy band of regulars Randy, Roman, Mike, Dick, Pieter & Pete. 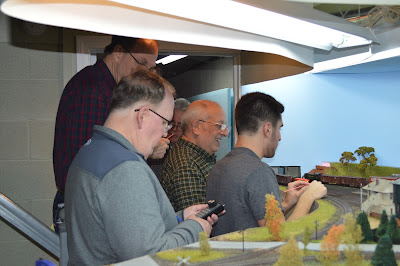 Things went very smoothly, thankfully - and likely due in no small part to the experience of the operators. But there was one unanticipated drawback of having so many operators - it was CROWDED! Huge contrast to last month's session which was all but snowed out. You can see above what happens when you have PDX-1 (eastbound Shoreline local, operated here by Roman and Mike), PDX-2 (westbound Shoreline local, operated here by Bill and Marty), and Shoreline trains (operated by barely-visible Dick) all running through Old Saybrook At The Same Time. 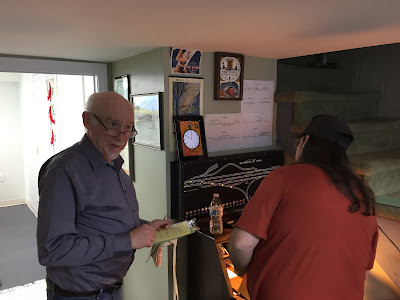 While it was pretty crowded, one of the benefits was having Randy take over my duties as AO so I could roam around, visit, and take some pics (thanks to Darren for help with that!). Here he is getting paperwork for the Valley Local's conductor. 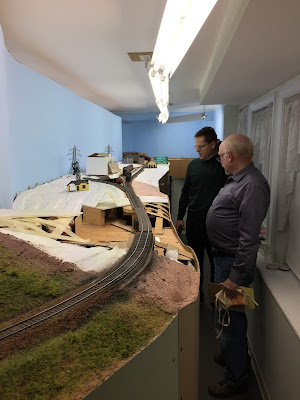 The Valley Local was crewed by Pieter and Bernie - that's them above switching Wethersfield. 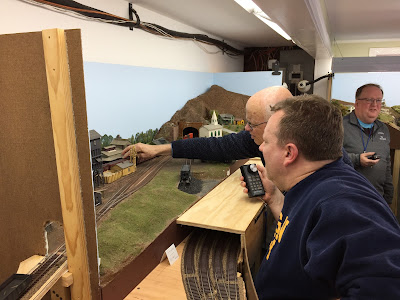 HDX-12 - The Airline Local - was crewed by Pete and Stic. They're doing some switching at Somerset while Marty looks on at Essex.

This was probably one of the most - if not the most - successful operating sessions we've had on the Valley Line so far. Everything ran great, any shorts (which were fewer than ever) were only the result of misaligned turnouts, and there were no major issues (other than the JMRI/WiFi throttle not working). Couplers on a couple of cars (and one caboose) need to be adjusted/replaced and the I-5 decided it doesn't like the curved turnout at the entrance to west end staging. Oh, and the verdict on my patented custom uncoupling tools was, um, not quite unanimous either way.

Other than those punch list items, I continue to try and enhance the operator's experience. I may try adding bill/switchlist boxes at each town so crews don't have to make the trip to "report to the agent" - especially helpful for avoiding the duckunders. And now that I've seen what a FULL staffing of the Valley Line looks like (a bit crowded), I may consider throttling the number of folks back just a bit.


With regard to the biggest choke point - Old Saybrook - there is fortunately some prototype evidence that the two locals weren't always in town at the same time ("schedules" for extra trains are notoriously optimistic) so next time I'll probably wait until PDX-2 has headed up-river before clearing PDX-1 into town. And until they report for duty, I may have the PDX-1 crew stand off to the side and run the "background" Shoreline trains instead of having a dedicated Shoreline crew doing that. Still considering.....

But the real the fun of all this - having friends over, both old and new, running trains and having a good time - wasn't diminished by being a bit, um, "cozy" - I just want to see if swinging the pendulum back ever so slightly will hit the sweet spot crew size wise.

I wouldn't have even been able to see how all this would work without having such great folks being willing to come over and provide a full crew. So THANK YOU to all the guys that took some time out of a very busy train weekend to run some trains on the Valley Line. With your help, it wasn't hard to imagine that we were a part of the post-war transportation network in southern New England.

Hope to have y'all visit again soon for another trip back in time!