I can't believe it's been 3 weeks since I mentioned BillS and I had started to rework the south end of Wethersfield, around the Valley Coal siding. Such is my life this time of year. Between work and either recovering from work (late nights) or catching up on stuff (deferred chores and "life" stuff), there's precious little time for the layout. But yesterday I was able to help out my friend Bruce with his layout - made all the better because it started out as Bill's layout - and Bill and Randy were able to join us to help too. Made for a really fun day.

Today, I got my I-5 tender repaired (thanks to Pete's loaner and the fact that my local hardware store actually had the right teeny, tiny screws in stock), I puzzled over why a certain pair of DL-109s keep losing their consisting (and addresses), and I used said I-5 to diagnose - and then spent an inordinate amount of time trying to repair (without success) - some faulty trackwork that's causing it to derail.

But after giving that up, I was finally able to get back to Wethersfield - and Valley Coal.

Here's where we were last time we were here:


After ripping out the cardboard lattice and plaster cloth that was there, it was time to backfill with foam. Unfortunately, I forgot to take a picture of my ingenious (well, not really) splice. At first, I'd planned on keeping the siding, including the plywood subroadbed, so I cut the foam to fit around that. Then I decided that it would be MUCH easier to cut the coal dump pit out of foam, rather than plywood (not to mention, the cut would have totally severed the plywood and require new and additional bracing/support). So I had to replace the foam I'd cut out - but now it had to be spliced. You can just make it out in the photos I took. 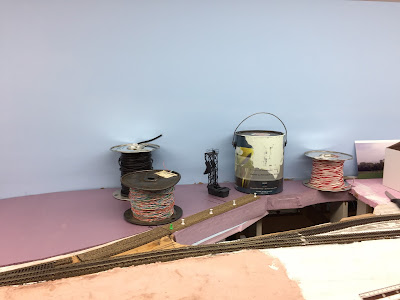 It took me a while to level everything up (yes, I know that the world ain't level - and the terrain in this part of Wethersfield actually slopes up - but it's always good to start with a good foundation for track), but then it was just a matter of applying some foam-friendly adhesive to the tops of the supports, fitting the foam, pressing it in place, and weighing it down - as above. I even glued down some more cork roadbed for the siding. 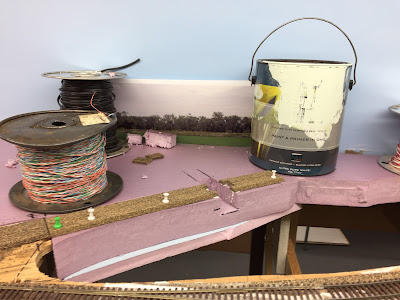 After taking so long to get back to Wethersfield, and still having some time left, I didn't want to leave - so I went ahead and cut out the pit for the coal dump. It was a little tricky, since the glue under the cork was still wet(!) 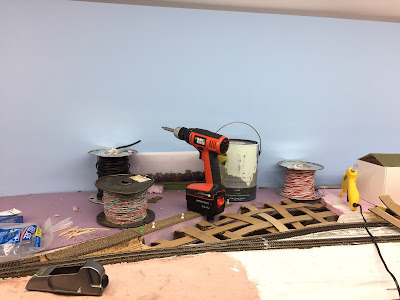 I even got the glue guns heated up and (re)did some cardboard lattice to fill in the big gap. This will be a low-lying area, just like on the prototype. And yes - glue gunS. I use an industrial strength gun for construction points (e.g. cardboard to wood), but a low-temp Woodland Scenics gun for attaching anything to foam (the glue from the other gun just melts the foam!). 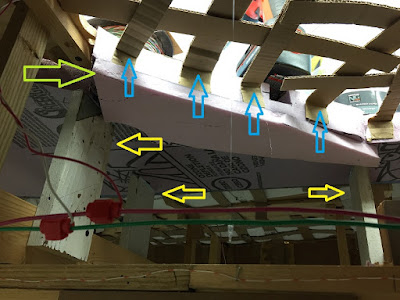 While that was all curing, I thought it'd be fun to take a seldom-seen view of the layout. Here we see the supports for the foam board (just scraps of 1x4, indicated by the yellow arrows), how I attach the cardboard lattice strips (blue arrows), and the splice (green arrow). 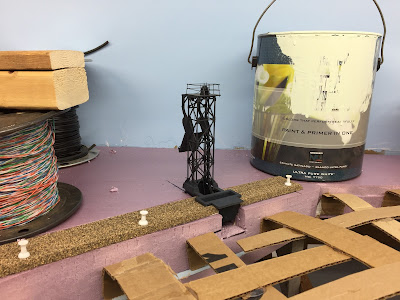 I couldn't wait to see how things would eventually look, so I placed the coal dump in place (see here for how I modeled it - yikes, over 2yrs ago!).

Not quite what you see here in the prototype photo, but it's on its way . . .