Like many of you, I have a "few" (well...) engines that aren't yet converted to DCC and lately I've been on the lookout for out-of-production New Haven steam locomotive models which rarely have decoders already installed. So, instead of being limited to just a short test track to run these on, I decided to make the "Air Line" dual-mode: I can easily switch from DCC to DC and back again at the flip of a (couple of) switch(es).

Long-time readers will recognize the "Air Line" as two 2x8 modules/towns that I use, operationally, to represent the Air Line of the New Haven that started at Cedar Hill Yard and went northeast through Middletown, across the Connecticut River into Portland, through Willimantic, Putnam, and ultimately to Boston. By my era, it - like the Valley Line - was relegated to a not-so-lowly branch: it was a popular haunt of many late-steam-era fantrips, not to mention the famous Ghost Train.

But that's all a story for another time. Click here for a quick tour of the fictional towns of Somerset and Mill Hollow on my Air Line stand-in. Read on for my dual-mode switches. 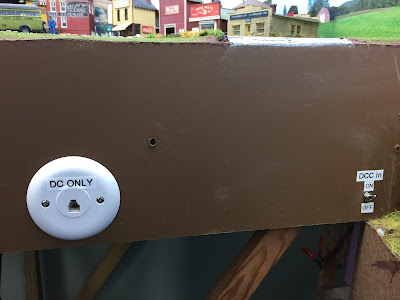 Fist, it's important to note that the Air Line is an electrical branchline too - it's "dead-end" electrically. The main bus wires come from the command station under Middletown, run the length of the two modules, and then end.  So all I had to do was cut-in an on-off (DPDT) toggle switch into the bus. That was a simple matter of soldering four wires to the switch, cutting the bus wires, and joining the wires with wire nuts. Other than the wiring, the most important part of this install is to clearly label this switch so you know what it does - this switch cuts out the DCC (which I discovered was necessary even if the DCC/command station is off. Something about back-feeding electricity or something...). 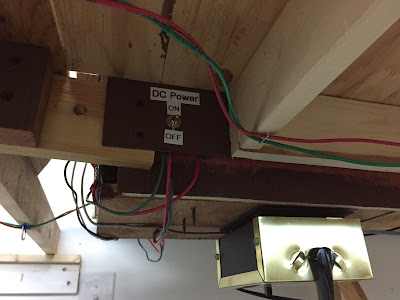 The switch above was installed the same way, but it's in-line between my DC power supply (a Control Master 20 on that makeshift shelf) and the bus wires (incidentally, that smaller gold power pack supplies power to the turnout in the tunnel at Somerset. The AC terminals on the CM20 power the structure lights on the modules).

So all I have to do to change from DCC to DC power on the modules is turn off the DCC at one switch, and turn on the DC at the other switch (and turn on the CM20 of course). Easy! 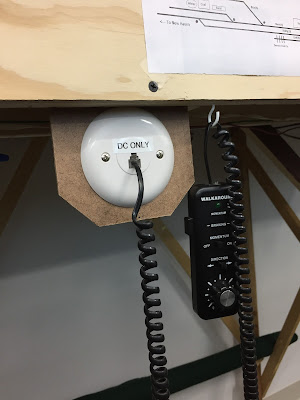 Lastly, the CM 20 allows for walk-around operation using regular phone jacks/cords. Pretty innovative for the time. Only problem is that my NCE cab bus also uses phone-type jacks. There are only two CM20/DC jacks (one on each module), but a little bit of labeling keeps folks from getting confused (thanks to Roman for the labeler!).

So I gotta know - does anybody else these days even bother to have DC along with their DCC? If so, do you have separate layouts, or did you do something similar to what I did?

If you want to have your cake and eat it too, give this approach a try - and if you do, be sure to let me know in the comments!
Posted by Chris Adams at 12:01 AM