Way back in 2003, I purchased a state-of-the-art wireless DCC system - the NCE ProCab. 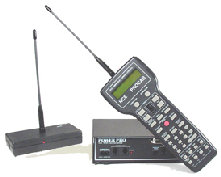 It's worked well over the last dozen years - as much as I've actually used it, which hasn't actually been all that much. I've done much more layout construction (and moving) than operating over the years.

But one day I got invited to an ops session at Craig Bisgeier's Housatonic RR and - bonus! - Tony Koester was going to be there as well and I was looking forward to meeting him. Craig was an awesome host, and the ops session was great (well, until the "burning booster" - but that's another story). But one of my first conversations with Tony still haunts me. . .

At one point during the session, we were chatting and Tony noticed the wireless NCE ProCab I'd brought along to use. Like the photo above, it had the long whippy antenna. "Wow - haven't seen one of those in a while. Be careful you don't poke your eye out."

Alas, my ProCab still has that whippy antenna, but I hear tell that there is a "fix" - some way you can do without this antenna and connect/route some antenna wire internally. I'd really like to do that - especially since it's more likely the antenna will knock over trees or other details rather than poke somebody's eye out (though you never know).

Have any of you done this conversion? How well does it work? If you have any info on how to do it - or, ideally, know where I can find a step-by-step article - lemme know!

(edited to change "antennae" to "antenna" where appropriate. Ooops!)
Posted by Chris Adams at 7:00 AM