I thought all the terraforming was done, now that I had finished the lumber siding relocation and the dirt scenery there. But before applying the static grass, I wanted to raise the height of the Gra-Rock Bottling Co.

Oh, and I had totally forgotten to plan for & install headblocks on my turnouts - but we'll get to that in a bit.

Using cork roadbed beneath your track becomes a slight problem when you want to model that "buried in the dirt" look of a siding. And the issue is just amplified when there is an industry alongside the track. That's the problem I confronted with the Gra-Rock building.


Now for the headblock fail & recover...

I'd finally decided on a ballast to use for the mainline between Hartford & Middletown (which had been newly-ballasted during the summer of 1945) and had just started applying it when I noticed that something didn't look quite right . . . 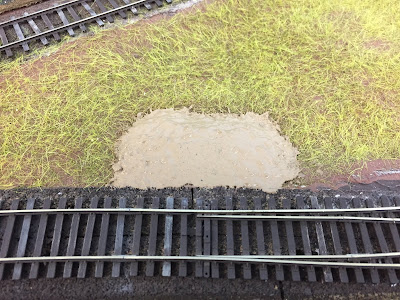 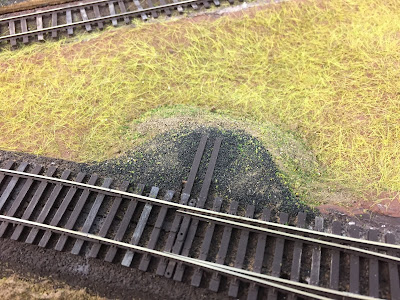 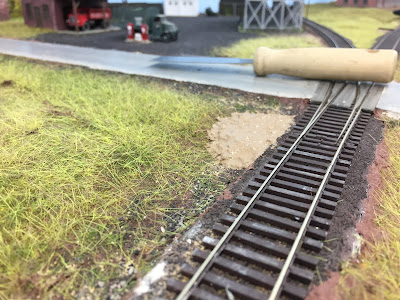 Of course, it would have been much better if I'd remembered to plan for - and then install - the headblocks right from the start. But the important lesson learned here is that there are few things that can't be redone and/or fixed - especially when it comes to scenery and scenic elements.

Hopefully, that will reduce some of the anxiety you might feel to even get started. I know it's helped me - but it's a lesson I apparently have to relearn over and over again.

As we continue to try and get the blog caught up, be sure to check in tomorrow - yes, there'll be a special Sunday edition where we'll start some static grass(!)
Posted by Chris Adams at 12:01 AM