Seems I can only make manic, sporadic progress on the layout lately. Sometimes I'm working in Essex, sometimes I'm in Wethersfield, and lately it happens that I'm trying some new things in E. Berlin. The last time I was there, I was working on a brick building to represent the Stanley Chemical Co. But since then, I acquired a number of wonderful structures from Bill Maguire that I want to be sure and use.

So that's required a bit of rethinking of how to proceed in East Berlin.

Considering all my prototype angst around Wethersfield Lumber, you won't be surprised to discover that I'm relaxing my prototype rigidity just a bit. In locations that aren't well-known or photographed, I'm allowing myself to "imagineer" a little. Thankfully, that gives me just the opportunity I need to be able to use some of Bill's structures. 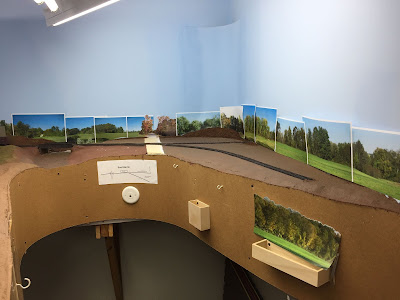 The photo above shows where I left off (click here for the details). The plan had been to use a brick station to the left of the road, and the Walthers modular brick factory (of my own design) between the wall and the track on the right. That would be Stanley Chemical. The track at the back, going off to the right into the wall, is the old mainline to the Kensington section of Berlin (and a connection with the New Haven-Hartford main) which was cut back to this point around 1917. I had a rough plan for a brickyard - or at least a concrete ramp for brick loading - along that track in the back. 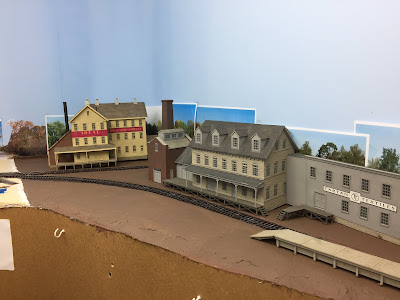 But here's what I'm going to use here instead - two of Bill's beautiful scratchbuilt structures. The only problem is locating them effectively. You might not have noticed in the previous photo that there's a little hill in the corner which pushes the yellow building toward the main. And the depth of the gray building pushes it up the siding toward the curve in order to fit.

First things first - I removed the little hill to create some more space in the corner . . . 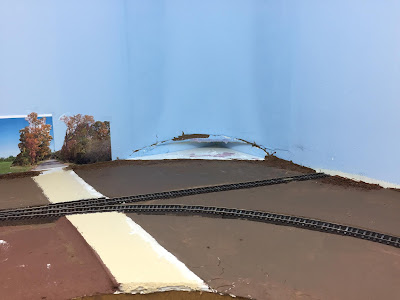 And since I wanted the foam board to go all the way into the corner, I hotglued a piece of foam to the wall for support . . . 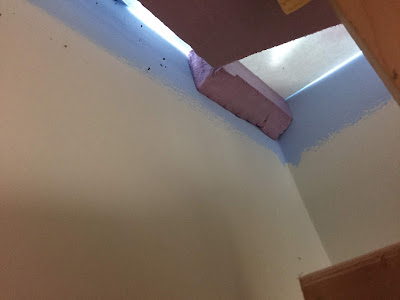 And then painted everything a uniform color . . . 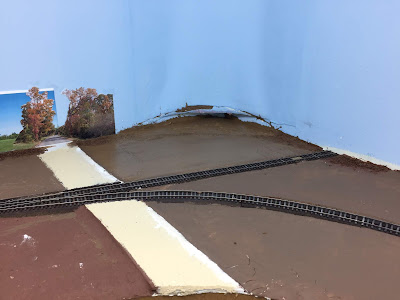 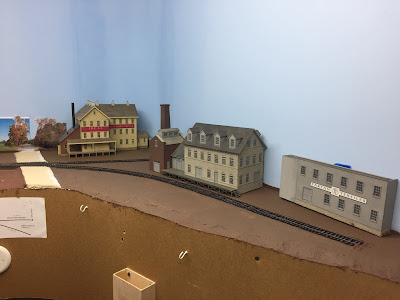 So that allowed the yellow building to scoot back toward the wall and away from the track, which allows room for a loading dock and a truck turn-around area. But here I'm still fussing around with the positioning of the gray building - even considering separating the two sections. 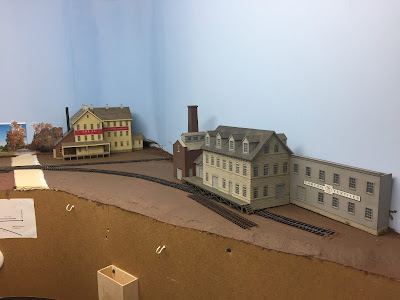 Playing around with the gray building's position some more, it looks like I may be able to move the siding further away from the wall to create some room, which will in turn allow both parts of the building to move down toward the end of the siding and allow more space between the two industries. 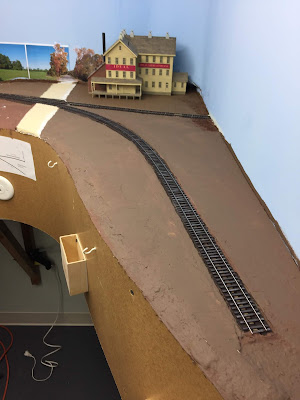 So "all I gotta do" is move the siding. And the first step to that is to get a sense of where the plywood subroadbed ends (which, in turn, will let me know whether I need to add more subroadbed under where the siding has to go). 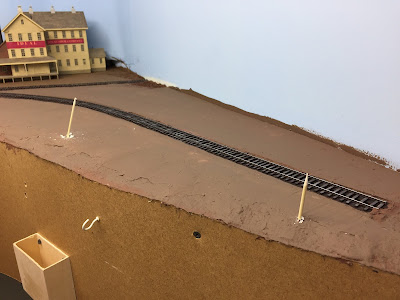 I pushed some bamboo skewers from underneath through the plaster cloth & ground goop to show the edge of the plywood. Looks like I may have enough subroadbed to move the siding further from the wall toward the aisle.