The recent mugging diversion was a good exercise for a number of reasons, not the least of which - it's prompted me to think more strategically about the backdrop in East Berlin. Here's an overview of where things left off once the track dried (and I removed all those bottles weighing in down!): 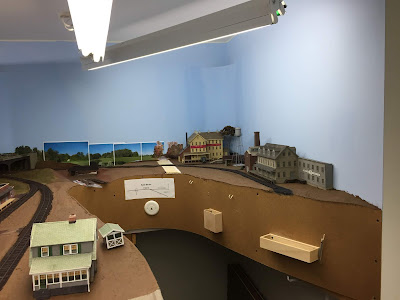 Based on the station photograph I found (and my subsequent reasoning for how to handle it), I'm going to rethink the backdrop that I've temporarily mocked up behind the station area and Mattabessett River bridge (to the left of the road) and turn my attention to the backdrop behind the new-to-me structures.

A while back, I sent some of my background photos to my friend (sadly blogless) PeteL for him to use. He in turn sent them to a company who stitched them together and printed them on a seamless 6' length of vinyl. Unfortunately for him (but fortunately for me), the scale of the trees on the resulting backdrop print didn't work for his space - he needed them smaller/further into the distance. So, he couldn't use said backdrop and offered it to me. After trying it unsatisfactorily in a few locations, I decided to try it in East Berlin . . . 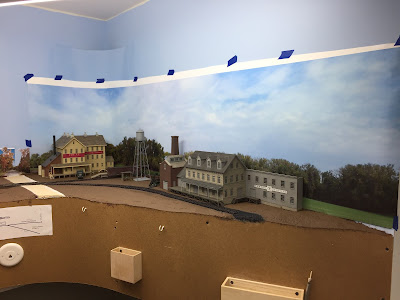 Not for nothin' - and I know it's not "perfectly prototypically accurate" (one can know too much about one's prototype area...) - but DANG! I think it looks pretty great here. And Bonus: the right edge of the print is even with the corner of the wall and with a minor shortening I can hide the the left-end seam behind the IDEAL building . . . 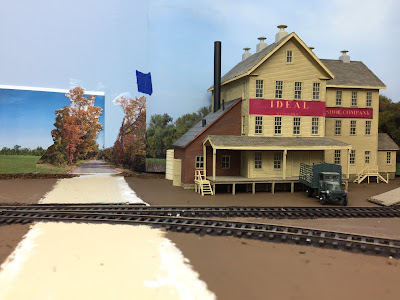 And in a stroke of total luck, much of the sky in the print actually matches the color blue I used to paint the walls(!) Check out these grab-shots: they're not PhotoShopped and the scale of the trees looks pretty good to me. Whattaya think? 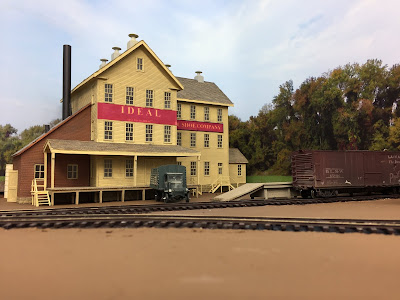 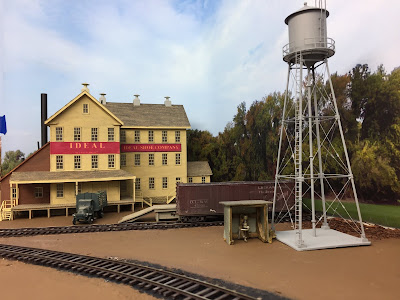 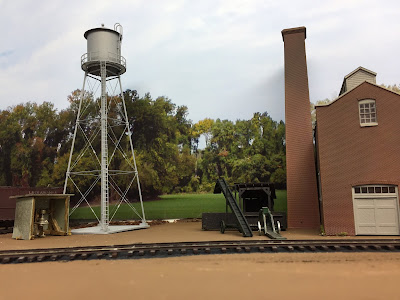 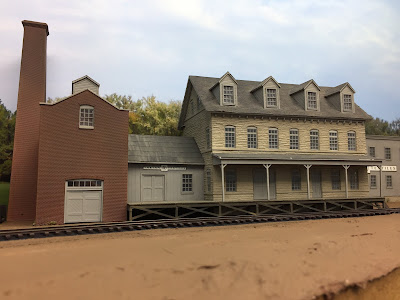 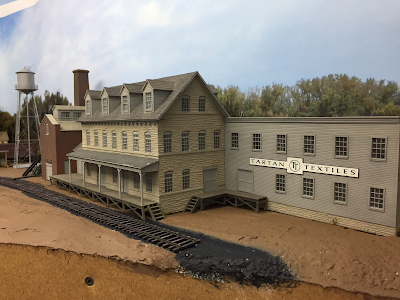 The sky looks SO good that I'm considering following Bill's suggestion to keep it, rather than trim it down to the top of the trees (as most of us do with such prints). I'd of course trim off that white border and might even do a wavy cut line to disguise the top edge. I may also try using some of my backdrop/sky paint - along with some flat white - to try and blend in the edges of the print.

Have any of you tried that sort of blending? Do you ever keep the sky or do you always trim it off?

For the time being, I'm just going to admire how it looks!
Posted by Chris Adams at 12:01 AM