Long-time readers will recall that I'm willing to redo things on the layout to make things more prototypically accurate - including removing & reconstructing trackwork and even redoing a backdrop to better match the prototype topography. But I may have reached the limit of my willingness to toe the line of prototype fidelity with the Wethersfield Lumber Co.

As with all things having to do with "prototype modeling," we of course consult the prototype. The older your chosen era, the harder that is - and you're limited to photos and maps (and the memories & recollections of those who were there... but more on that later).

In the case of the Wethersfield Lumber Co., I've got one not-so-decent photo. . .

. . . and one relatively accurate map: 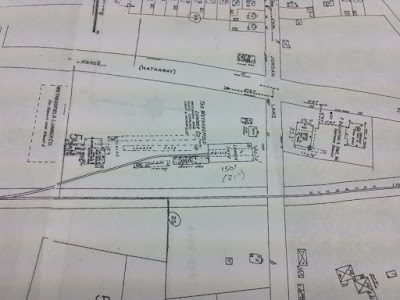 For the longest time, I just had the siding branching off the mainline, all loose and whatnot - waiting for the day I got some additional information. Well, once I saw the photo and saw that a Walthers kit would make a reasonable stand-in, I built the kit and started roughing in the scene.

Unfortunately, given my space constraints and the size of the lumber shed (already WAY shorter than the 21" long a true-scale model would be), this is the scene that resulted and how it looks today: 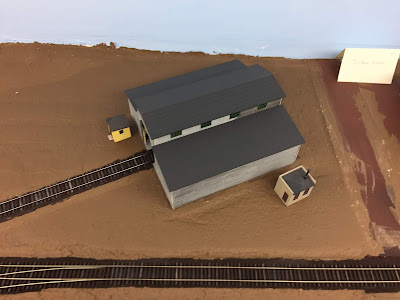 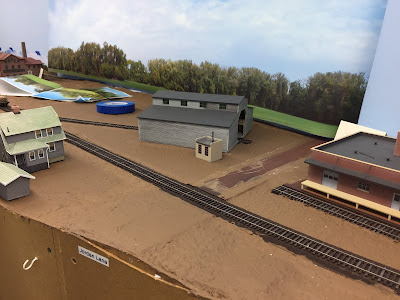 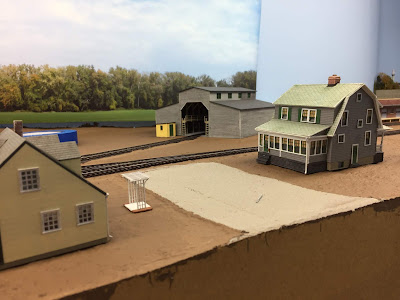 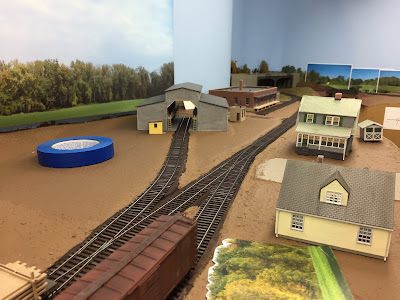 Eagle eyes (such as those possessed by my friend and structure builder DaveM) will notice right away that something is amiss. Namely, that the lumber company siding is not parallel to the mainline(!)

There are a few reasons for this, all having to do with the space constraints alluded to above. Primarily, I wanted to maintain some space/distance between Wethersfield Lumber and the Fernwood Street scene (a focal point, since John Wallace's house is there - more on that in an upcoming post). On the prototype, there's over half-a-mile between them, so I wanted them to be visually separate.

Also, there is the matter of the siding and surrounding area all being thoroughly gooped in... 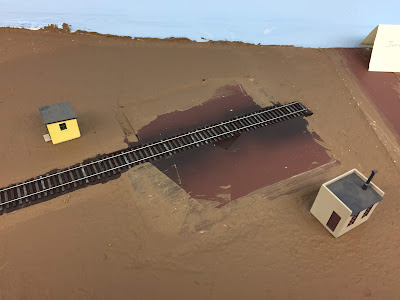 Nevertheless, not being bashful about doing major changes for the sake of prototype accuracy, I decided to at least mock-up what a change would look like . . . 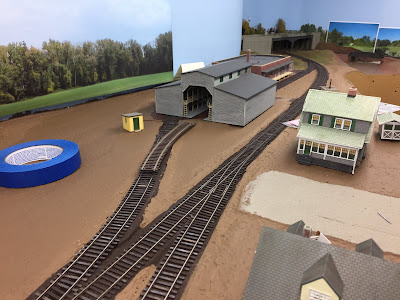 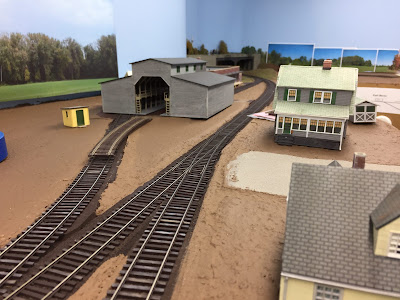 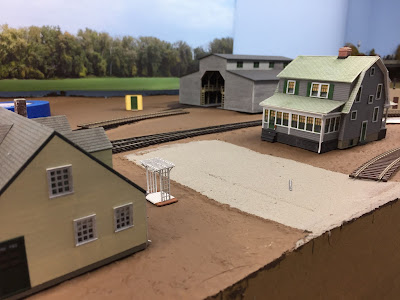 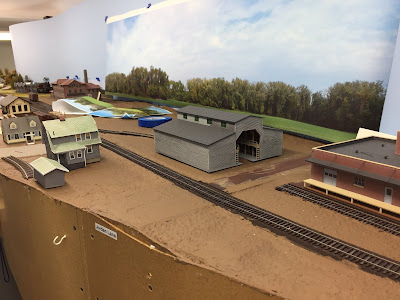 Changing things so that the siding & shed are parallel to the mainline (and, incidentally, perpendicular to Jordan Lane - seen between the shed and Ballantine's in the pic above) would require chiseling out all the ground goop, risking damage to the subroadbed (in this post you'll see that the area is built on a combination of plywood and foamboard) and, of course, prying up & moving the track. I'm up to the task, but I'm not convinced the work would really be worth it. Sure, the siding and shed would match the Sanborn map, but it starts to crowd into the Fernwood neighborhood a bit.

All prototype modeling is a compromise of accuracy within the space available. But the "best" examples of prototype modeling strike the balance in such an effective way that you hardly notice any compromises made. In the case of (finally) locating the Wethersfield Lumber Co., the "best" location may be what makes the scene look right overall, especially when there's nothing but one blurry photo and an insurance map to tip my hand.

Well, that and the razor-sharp memories of a certain couple fellas that grew up in the neighborhood during the era I'm modeling!
%^)

What would you do? How far are you willing to go in the pursuit of true prototype fidelity? How do you balance space constraints with prototype accuracy?

Weigh in in the comments below!
Posted by Chris Adams at 12:13 PM