"No plan survives contact with the enemy."
-paraphrased quote by Helmuth von Moltke

Building a successful model railroad shouldn't be likened to going into battle, but it sometimes seems that way. Despite the most-detailed plans, Harsh Reality (the "enemy" in our little metaphor) has a way of at least modifying said plans, if not totally laying them to waste. You can fuss and fret all you want, but the path to success is being flexible enough to accommodate/overcome/go around the inevitable hurdles reality puts in your way and confront them head-on.

The most common hurdles are planning curve radii which won't actually fit, or turnouts that turn out to be much longer than expected. But sometimes, the hurdle is the result of an unanticipated opportunity. Case in point: the Dickinson Witch Hazel Warehouse in Essex. 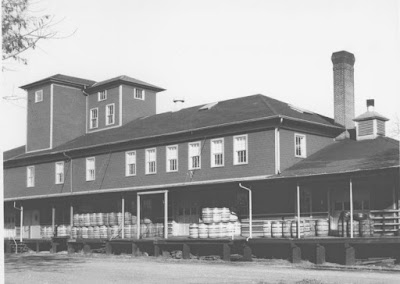 Ain't she a beaut? And she still exists today... 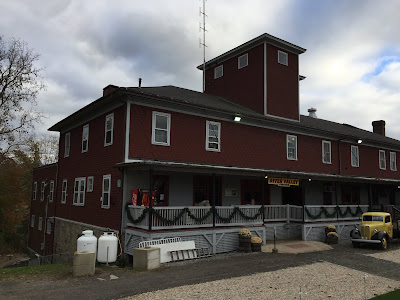 Other than the station itself (actually, the freight house in my era), the Dickinson warehouse really establishes & anchors the entire Essex scene. So there was never any question that I would have to include a model of it on my layout. 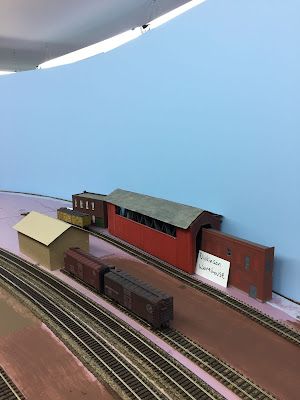 For the longest time, I just had this as a temporary mockup. I figured the 3" or so between the track and the backdrop would be enough space for a deep-relief flat version of the warehouse. 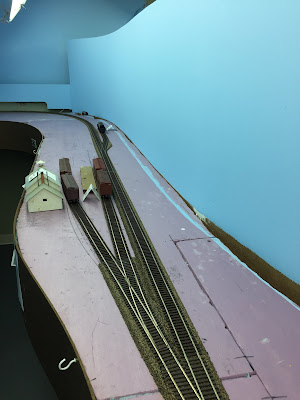 And a flat would be just about all I'd be able to accommodate since Deep River is directly on the opposite side of the backdrop - and, as you can see, it's already a bit snug there (especially down by the transfer siding in the distance). No worries though - all that's on the backdrop side of the track here is a riverbank - and the river itself will be on the backdrop.

So that was my rough plan - a 2" or so deep flat version of the Dickinson warehouse. Then reality hit in the form of an unanticipated opportunity courtesy Bill Maguire. 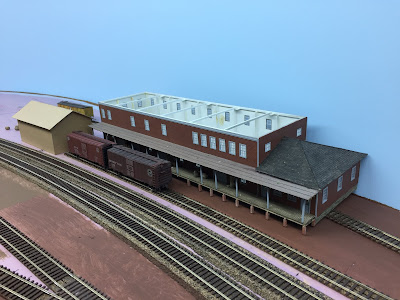 Yup, that's a full-scale model of the Dickinson warehouse that Bill built and gave to me when he dismantled his layout. That's the good news. The, um, not so good news is - well, you can see how it fits . . .

Now, there was absolutely no way I was going to cut or in any way modify such a gorgeous model, so I moved it down the siding until it actually fit . . . 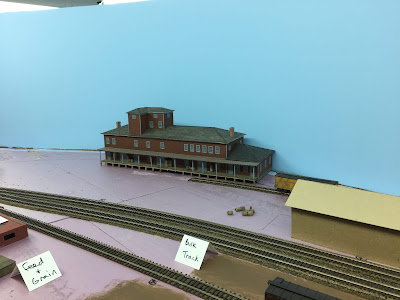 It "fits" but certainly isn't located where it really needs to be. So next I decided to see what I'd need to do in order to get the warehouse to fit where it's supposed to go. 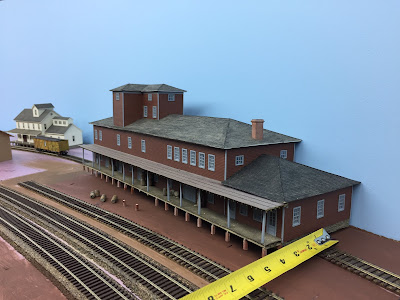 Turned out, I needed about 4 more inches(!) between the track and the backdrop in order to get the warehouse to fit properly. Ugh! 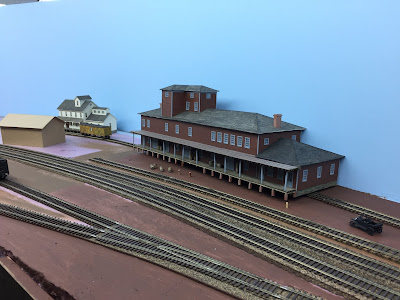 I pushed a long bamboo skewer through the foam to mark the corners of the building. In this overall view, you can see how much track would need to be moved in order to create enough space. Moving all that track was a non-starter. I'd end up losing the sidings closest to the aisle, not to mention creating unrealistic - and probably non-working - big S curves at each end of the scene.

So, if I couldn't move the track, the only other option (other than cutting the building, which was another non-starter) was to move the backdrop. So that's what I did. 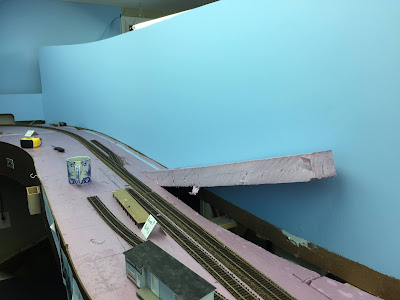 My friend RonD has often said that "the toughest aspect of  any modeling action is the first step" and, once I'd decided to move the backdrop, things progressed pretty quickly. It's amazing what you can do with a sharp steak knife, despite the foam being 2" thick (based on a previous experience with BillS, I decided against burning through the foam with a hot knife). 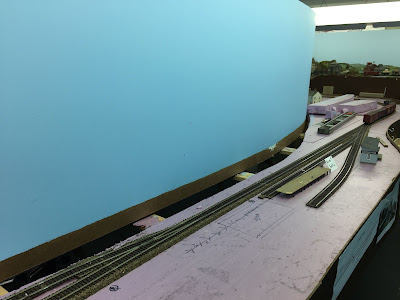 Fortunately, the backdrop rests on the slats and within a slot that had been cut into the foam (with said hot knife), so I figured "all I have to do" is remove more foam and push the backdrop over enough to make space for the warehouse. 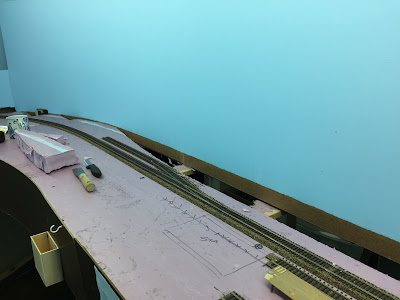 Well, that was mostly correct. Unfortunately, I'd forgotten that I did install one vertical support to hold things up . . . 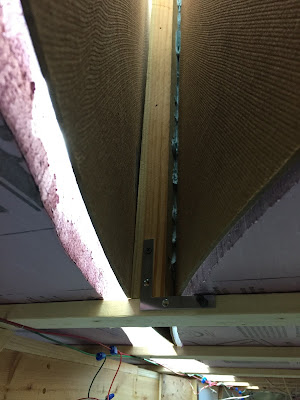 And, also unfortunately, when I went to move the backdrop toward the Deep River side of the peninsula, it got hung up on this L-bracket. It took me longer to get in there with a screwdriver and move the L-bracket than the whole rest of the moving project did (and I never did get the bracket totally removed). But at least I got it unhooked and was able to move the backdrop just enough. 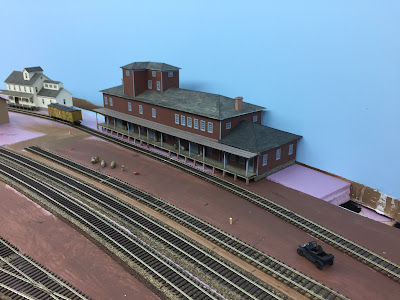 A piece of foam, wedged in the gap on the Essex side, is enough to hold the backdrop at bay. Voila! There's enough space (finally!) for the Dickinson warehouse! 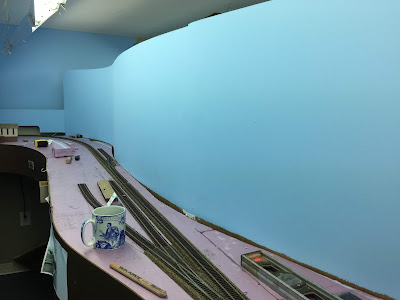 But the Deep River side has suffered a bit, admittedly. See how close the bow in the backdrop comes to the transfer siding? 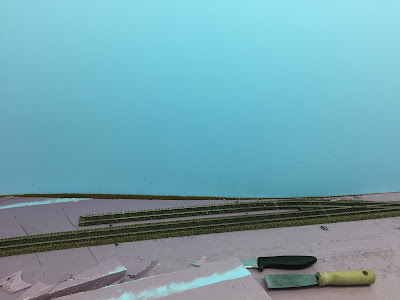 There's enough clearance to get cars past there, but it doesn't look that great. There's going to have to be some creative sleight-of-hand scenery-wise to disguise this. And I'll probably move the siding a bit further north (left) as well. 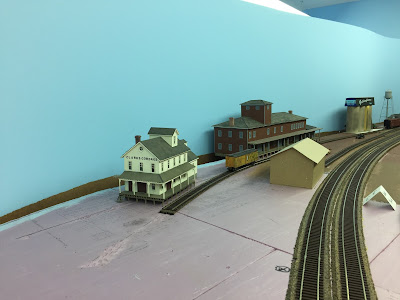 But, in my mind at least, that's a small price to pay for such a signature structure in one of the most important towns on the Valley Line. 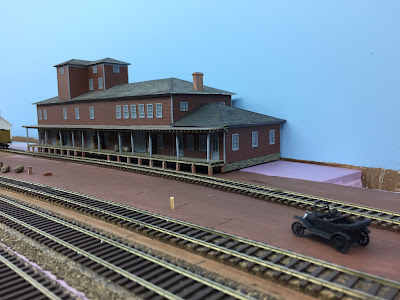 Whattaya think? I know everyone has their own "givens & druthers" and you may have decided differently. How do you tend to confront the inevitable obstacles you encounter during layout construction? Any helpful tips or suggestions? Weigh in in the comments below.

And thanks again to all of you who either posted here or emailed me directly about Wethersfield Lumber. I really appreciate your taking the time to write and share your thoughts and perspectives. Stay tuned for more progress there. For now though, I think I'll give the Essex scene a rest.