Modeling Monday - Back to Berlin

East Berlin, that is - and the Stanley Chemical building. 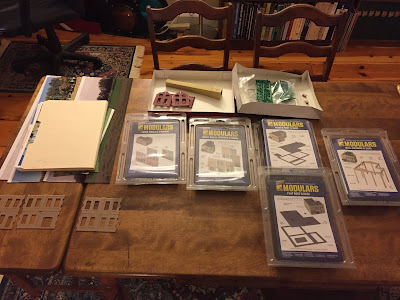 In keeping with the cruelty of April Fool's day, I just realized that I actually started this project way back on February 11 and still haven't finished it. I clearly have my priorities misplaced (and, due to some early spring-like weather, I've been distracted doing Mustang things).

Click here for the introduction to this project, where I set up different mockups and ultimately decided to go with Walthers Modulars. And now, it's time to bring you up to date with what I have been able to accomplish so far - despite the weather...

Here's where we ended up last time: 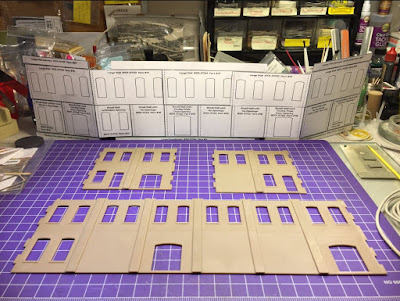 The mockup is in the background and I've assembled the walls to match, using liquid styrene cement applied on the back. Even before doing that though, I made certain any flash/parting lines were removed and I sanded off any blemishes left by removing the parts from the sprues. 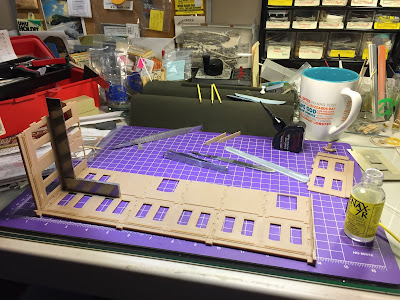 In the pic above, you can see I already shrunk the right end wall down to just one wall width wide. And I'm test fitting the larger end wall to be sure that the corner cornice is perfectly square. 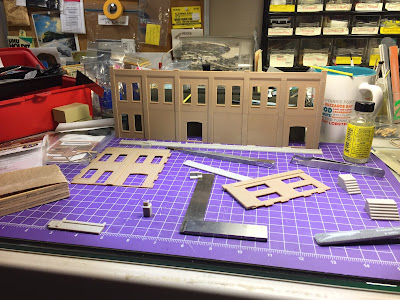 Next, I figured out what parts I needed for the foundations and put those together. 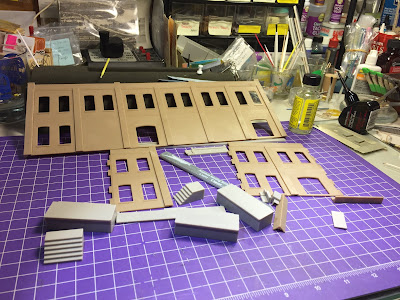 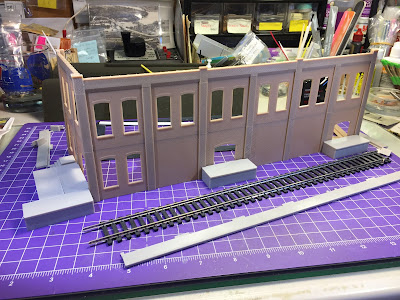 But I finally came up with an arrangement that I think makes sense. Since there's no longer any loading door the the right end wall, I contrived a third car spot by adding additional dock space by the front/office door on the left end wall. This loading dock will be able to serve trucks as well as rail cars. 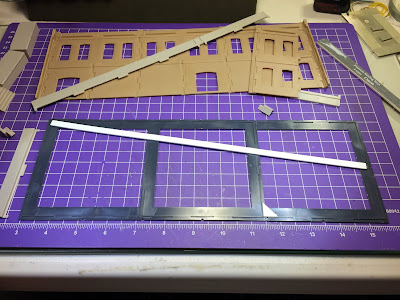 Next, I turned my attention to the base. In order to accommodate such a long building, I had to splice on an additional "square" of base material. I just butted the ends of the addition to the edge of the other base and added liquid cement. But that alone wouldn't be a strong enough joint, so I added the triangle brace/splice you see above and, using my end walls as a guide/template, I figured out where the bottom of the back wall would be and added another long strip of styrene as an additional brace. 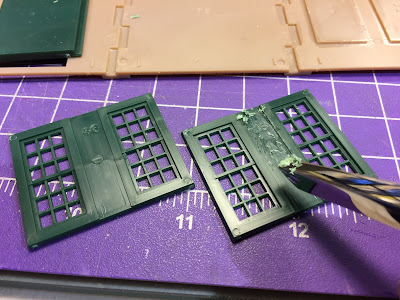 Figuring out the windows and doors was an easy matter of matching what I had to what I needed. The only note on these (other than the usual sanding away any sprue gate blemishes) was to carve off the part numbers from between the windows. This is the area that's glued to the back of the wall so I wanted to be sure it would mate perfectly. 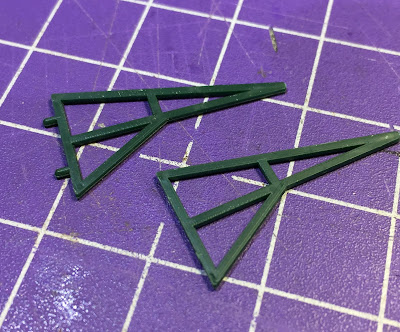 I wanted to get as much done before painting as possible, putting things together in subassemblies and sorting them into different boxes by color - rusty red for the brick parts, black for the roofs and supports, green for the windows & doors, concrete color for the foundations/docks/stairs. One of those subassemblies was the loading dock roofs, supported by these cool triangular parts. They come with locating pins, but there are no holes pre-drilled on the walls and I didn't feel like drilling all those holes perfectly vertical and the perfect distance apart.

So I just removed the locating pins. I'll use some thicker, slower glue to attach these to the walls. That way, I can move them into perfect position when I attach them. 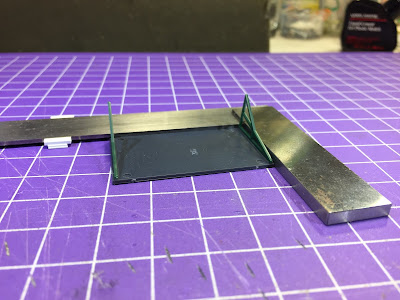 To actually assemble the loading dock roofs, and make sure the supports were as perfectly perpendicular as possible to begin with, I used my handy-dandy "Square Leveler (tm)" :^) In fact, it was this little step in the assembly that prompted the creation of that tool to begin with. 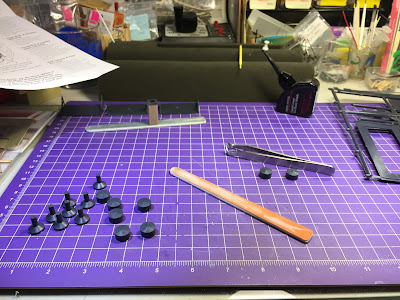 Assembling the chimney was pretty straightforward (four sides with beveled edges), but I did sand off the locating pins since they actually prevented the corners from fitting tightly. Then I cut out all the parts to do the exhaust fans and cleaned those up. Interestingly, those little buggers actually ended up being a bit frustrating to assemble.

But I'll save that little saga for next time. For now, I'm trying to get as much of this thing together as possible - if only because I'm procrastinating on painting %^)
Posted by Chris Adams at 12:01 AM