Since the major structures are close to being done in Wethersfield (and it seems like I'm still waiting for that ground goop to dry), I decided to shift over to the end of the East Berlin Branch and come up with something for the Stanley Chemical Co.

By way of background, the East Berlin Branch heads north from the north end of Middletown yard to serve brickyards along the way and it terminates at the Stanley Chemical Co. - producers of paint - at the end of the line. The line had originally extended all the way to the Kensington section of Berlin for a connection with the New Haven's Hartford-Springfield line. But the line had been cut back to East Berlin in 1940 and the rest of the branch was abandoned back to Middletown in 1961.

East Berlin was also the site of the Berlin Iron Bridge Company. Unfortunately, it was gone by 1948 but the Valley Local still serves StanChem and the brickyards - even if it has to back all the way caboose-first over sketchy track at no more than 10 mph.

Unlike much of the rest of the railroad, I don't have much in the way of photos of the area. And, considering my existential angst, this is a good thing. I can do a little proto-freelancing and come up with my own version of what I imagine StanChem, circa 1948, to look like.

I started out by mocking up some DPM modular wall sections. 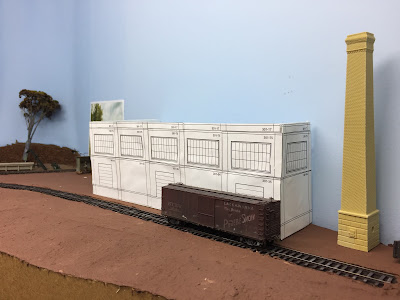 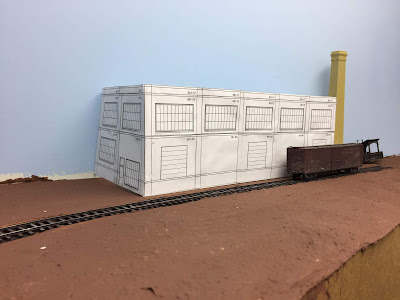 The good news is that it looks pretty good and it'd fit nice. The bad news is that, despite having a pretty good collection of DPM parts (thanks to friend Pieter), I don't have enough of the correct ones to actually build this building. I'd have to make a pretty large order, and I'd rather try and use what I have on-hand. 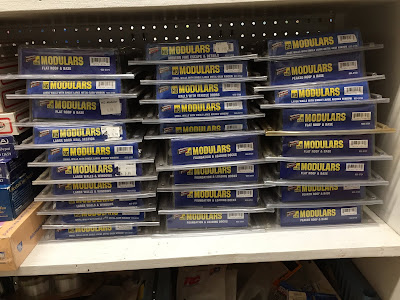 Thanks to friend Peter (not to be confused with friend Pieter...), I have a good collection of Walthers modulars. The pic above isn't my collection - I took it at a local shop for reference to see what, if anything, I might be missing. 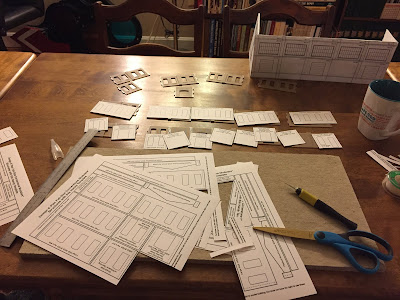 The Walthers modulars come with a template you can copy/cut/paste/tape into a mockup to plan your building. And here's what I came up with: 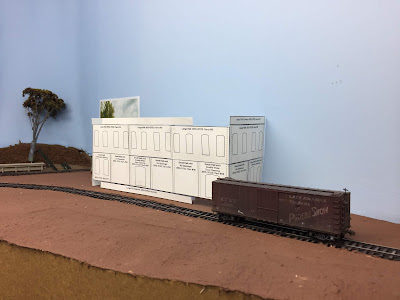 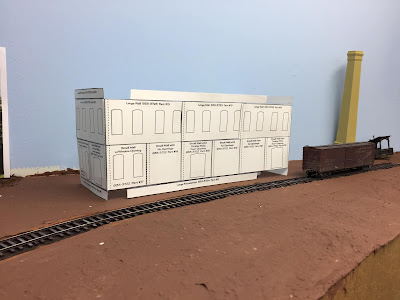 Compare these photos to the DPM mockup above. The Walther's mockup is a bit shorter and a bit deeper (requiring it to be moved further up the siding toward the turnout), but I think I can make a nice dock area at the back (right end) of the building to serve an additional car.

Also, for my birthday, I got a Walthers "Commissary/Freight Transfer" structure kit and an "Armstrong Electric Motors" kit. These are low-relief buildings, so I mocked them up to see how they'd look: 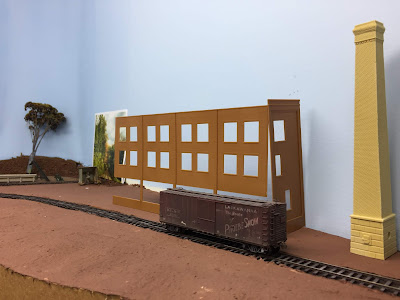 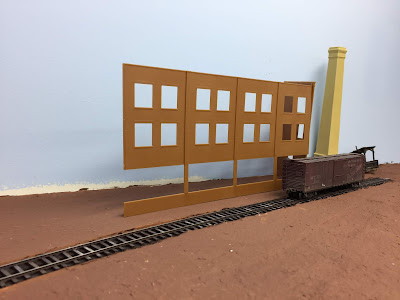 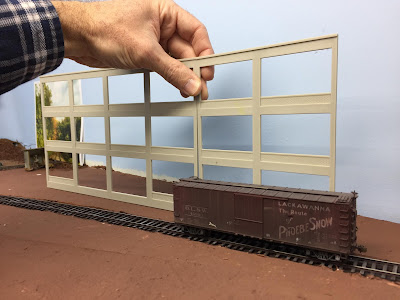 They both looked pretty good, but as low-relief buildings, weren't quite deep enough. If I placed them against the wall/backdrop as designed, the loading doors would be far too far away from the siding. And if I place them right next to the siding, I'd have all sorts of crazy empty space behind the structure.

So these two structures will likely go to Middletown. 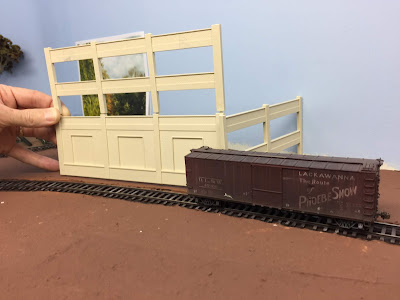 Finally, I tried a City Classics structure I got at Springfield last month. It looks nice, but it's really too deep for this location. To fit it without cutting it down (which I'm loathe to do), I'd have to move it WAY up the siding toward the turnout, wreaking havoc with the scene - not to mention the car spots.

So, I think I'm going to go with the Walthers modulars. I have the right parts on-hand and my mockup shows that it's almost as ideal for the space as the DPM mockup I'd started with. 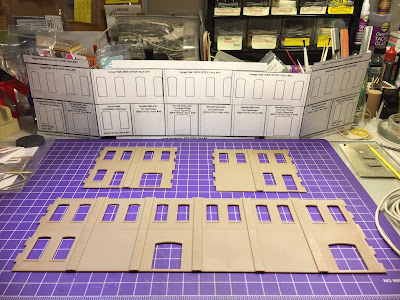 And since I do have the parts on-hand, I was able to start putting the walls together while hanging out (via teleconference) with a bunch of modeling buddies. Being at the bench while chatting with friends - and getting some timely advice on kit assembly (thanks Kaylee!) - was a great way to spend an evening.

Next, I'll need to prime and paint the walls. So if any of you have any advice/tips/suggestions on how best to do that (paint choices, techniques, etc), I'd love to hear them! At this rate, I may be able to get the Berlin Branch done a bit earlier than I expected!
Posted by Chris Adams at 12:00 PM